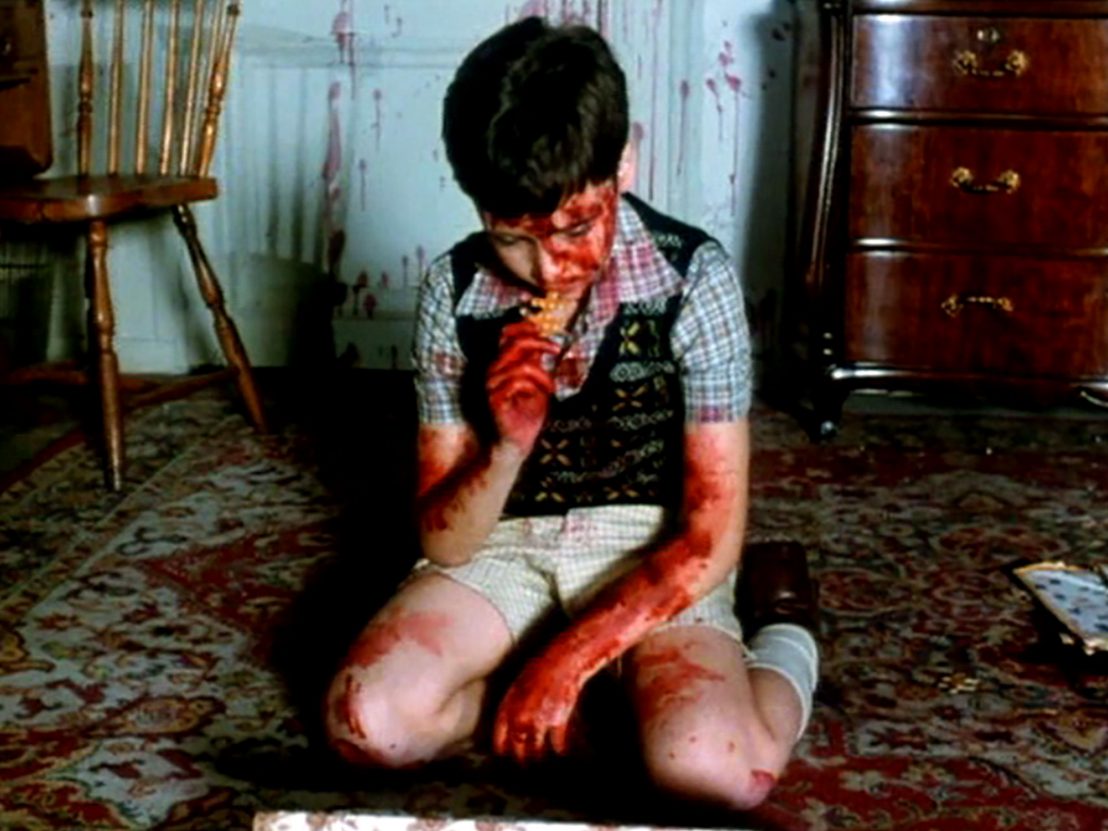 Boston, 1942. With Father off serving in Europe, Mother – in her pretty blue dress – is horrified to find little Timmy Reston assembling a jigsaw puzzle depicting the image of a nude pin-up girl. “You dirty little rat, playing with filth like this – just like your father!” she yells, slapping the 10-year-old hard in the face. “I’ll kill you if I ever find stuff in the house like that again.” Timmy then takes an axe to his mother, chopping her into pieces. When the police arrive, they assume it was the work of an intruder, and send Timmy off to live with his aunt.

With most of its action set 40 years later, this opening sequence to Juan Piquer Simón’s Pieces (aka Mil Gritos Tiene la Noche, ‘1000 screams in the night’) is also a primal scene, establishing the disturbed psyche of a fatherless and sexually repressed boy who will now, as an adult, kill and kill again. Events unfold on a university campus, as a killer serially slices his way through the student body with a chainsaw, removing from each a different part.

As the killer methodically assembles an idealised mix-and-match corpse to recreate in flesh both his own mother and the woman depicted on his blood-spattered jigsaw puzzle, jaded Lieutenant Bracken (Christopher George), his assistant Sergeant Holden (Frank Braña) and undercover officer Mary Riggs (Linda Day) are also trying to piece together a profile of the perp from both clues and red herrings. On hand to help is Kendall James (Ian Sera) who, putting the stud in student, is himself something of a ladykiller.

And as the dismembered bodies pile up, there is a race to determine whether the murderer is crazy-eyed, chainsaw-loving groundskeeper Willard (Paul Smith), suspicious moustache-twirling anatomy professor Arthur Brown (Jack Taylor, a regular in the films of Jésus Franco) or the mild-mannered Dean himself (Edmund Purdom, channeling his best Gregory Peck).

In keeping with the conventions of ’80s slasher movies, there is plenty of tits and ass on display here for the male gaze of the killer (which the viewer is forced to share) – although also, refreshingly, there is some male nudity too, first exposed to the camera, and then hilariously concealed by a well-placed flowerpot. And while it is mostly female flesh that is dissected by the film’s voyeuristic psycho, in the final scene a very different kind of killer goes right for the balls, restoring the gender imbalance.

If all this sounds like standard giallo/slasher fare – and it has elements from both – in fact Simón constructs his film in much the way that the killer recreates his puzzle: taking a bit from here, a bit from there, and stitching all these disparate pieces into a monstrous hybrid. For here we also have campus comedy, lengthy voguish aerobics sequences, and even an entirely gratuitous kung fu scene (with actor Bruce Le doing his very best impression of his near namesake) – and in the end, when the whodunnit has been resolved, there is a coda which once again shifts the genre, this time towards monster movie territory.

With its rough-hewn composite identity, Pieces proves hard to pin down. It is set in Boston but mostly shot in Madrid; the dialogue in its English-language version is always mannered and unnatural; its dubbing is shrilly overacted and hyperreal. All of this contributes to the film’s elusive, intangible quality, as familiar tropes are remixed in unexpected combinations and defamiliarised through idiosyncratic gestures.

Though it has since gained a cult following, when it was first released Pieces barely registered with audiences, who were perhaps mesmerised by its brilliantly tawdry poster tagline (‘It’s exactly what you think it is!’) into imagining they were watching bog-standard slasher sleaze. On the contrary, Pieces is several strange slices of scabrous sensationalism whose whole is far more than the sum of its parts.

Pieces is released by Arrow in a Deluxe Limited Edition with brand new 4K transfer on 27 March.