Watch this adorable film about dogs at polling stations

One of the rare joys provided by the recent UK general election was the return of #dogsatpollingstations, which saw pet owners once again share images of their democracy-loving pooches posing outside local voting centres. Intrigued by this most British of social media trends, filmmaker, programmer and LWLies contributor Ian Mantgani hit the streets of London on June 8 armed with a 16mm Kodak camera to document this adorable cultural phenomenon – and to explore the political subtext therein…

“One of my great passions is admiring cute dogs, and another is politics, so the two seemed a natural fit! The hashtag is a fun social media phenomenon, but I thought it might be poignant to flesh it out into the motion picture sphere – it occurred to me that tableaux of dogs, contrasted with people talking about their urgent views on politics, might be an interesting meditative experience.

“I’ve got a bit of a history of making films that involve political events, but show life carrying on at a ground-level way: I’ve previously made documentaries of street scenes in Glasgow on the day of the 2014 independence referendum, and about life in the city of Cleveland during the week of the 2016 Republican National Convention that nominated Donald Trump.

“One interesting part of the day was that we went all over London, including to Vauxhall and to Jeremy Corbyn’s constituency of Islington North, but there were hardly any dogs at polling stations except in leafy areas like Crouch End and Highgate, where there were essentially dogs on tap. This affected the social milieu of our vox pops, and it also reveals the #dogsatpollingstations phenomenon to have some origins in touchy-feely, privileged middle-class culture. Make of that what you will, but I think it’s interesting.

“I’m quite happy with the film and feel that it does provide that meditative feeling I was looking for. You look in these dogs’ eyes and wonder, what on earth could ‘Brexit’ mean to a dog? There’s also an unintended subtext in there that I only realised watching it back: The dogs are waiting patiently for their masters, and so are we, the voters.” 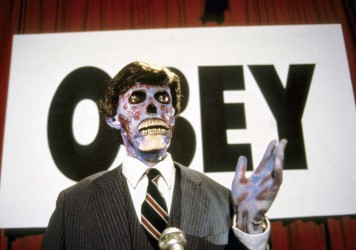