George A Romero originally had a different fate in store for the protagonists of his zombie classic. 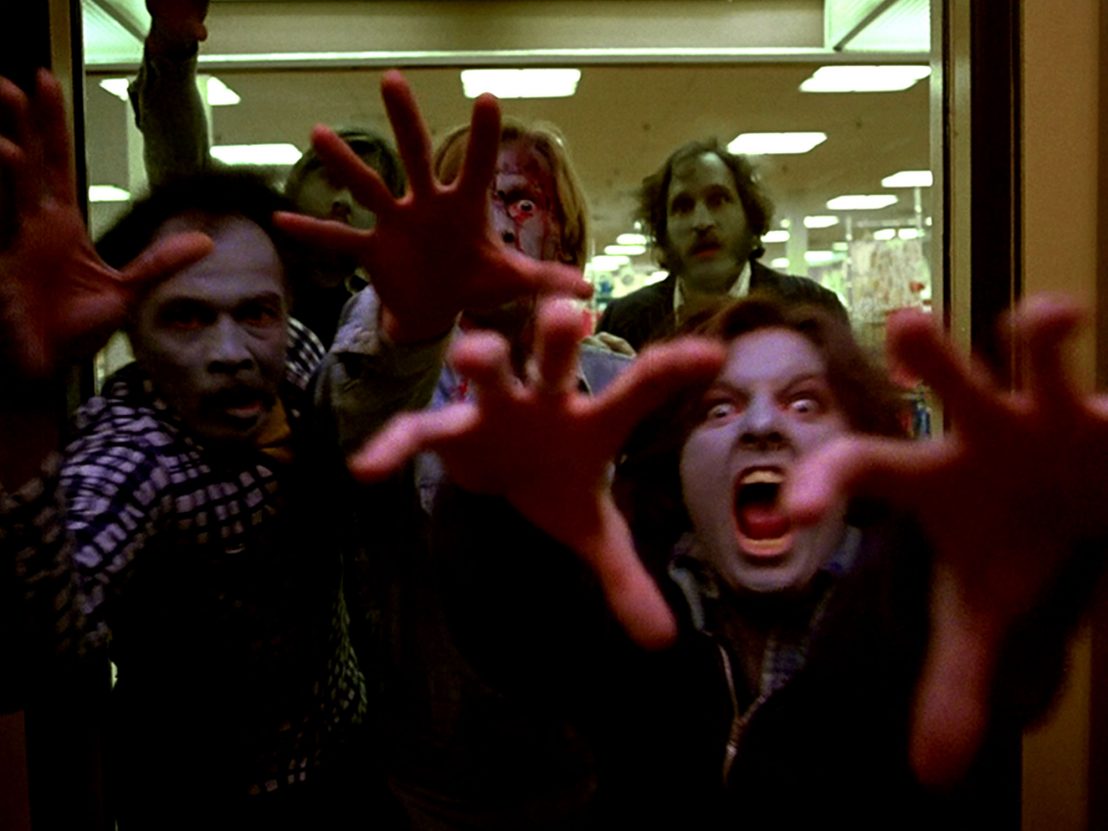 In 1968, George A Romero ushered in a new kind of zombie with Night of the Living Dead. On an isolated farm in rural Pennsylvania, characters have found refuge in a barn but cannot agree on the way to survive against the hungry undead. Ben, a black man, is the most capable – but racial tensions ice his leadership. As he survives to the end, the arriving police-force mistake him for a ghoul, shooting him in the head. In images evoking lynchings, his body is dragged onto a fire as the credits roll.

A decade later, Romero released Dawn of the Dead, which turns 40 this year. With the images of zombies swaying comically to muzak, the film is often referred to as an allegory about consumer culture, but its early sequences, as a police force open indiscriminate fire on residents of a housing project, digs even deeper. Consumerism is not just a numbing force but a tool in complacency. It is not consumption, per say, that has crowded the bowels of hell but the broken systems that perpetuate violence and apathy.

The film instantly achieved iconic status within the horror genre, but you may not be aware that Romero wrote an alternate ending. Where the final cut has Peter and Francine flying away on a helicopter towards an uncertain future, in the working script their fate was significantly bleaker. Okay, so the version that made it to screen is hardly the feel-good ending of the year, but there is an inkling of hope that the pair might find a new refuge. They’ve survived the first chapter of the apocalypse – maybe they’ll survive another.

In the working script, things pan out in familiar fashion as Francine, Stephen and Peter make their way to the roof. Stephen becomes a zombie and Peter shoots him in the head. Then comes the moment where things diverge. As Francine and Peter are separated, she makes her way to the roof and he locks himself in a room, and from the outside, we hear a gunshot – the zombies crash in, we understand that Peter has killed himself. On the roof, Francine has started up the helicopter. Zombies break their way through the skylight and advance, in the working script, it says:

The film’s credits scrawl up, the helicopter’s engine sputters and dies. Even if they were to escape, they would have never made it more than a few feet before dying in a fiery blaze.

Special effects designer and makeup artist Tom Savini has argued that Romero shot the so-called “suicide ending.” The director largely denied it, although in the 1985 documentary Document of the Dead he does admit that version of the ending was partially shot. In any case, many have speculated that even if it were to have existed at some point, the footage is likely lost by now.

The change in ending stemmed from something that happened on set. Over the course of the production, it became apparent that the film had a brighter comic book feel than Night of the Living Dead. According to Savini, after they had begun shooting the film’s bleak ending Romero held a meeting to inform the crew that they we were “going to have an ‘up’ ending”. Romero had also grown attached to the characters – he didn’t want to see them die.

It’s fun to speculate on what would have happened if all the characters died before their escape. Was it, as Romero felt, that the ending would have been tonally out of touch with the rest of the film? In many ways, Romero found a comfortable middle ground between hopelessness and optimism in his changed ending, which still hinted at probable annihilation. Would the ending be better if all hope was erased?

On a commercial level, it’s clear that a mass audience would be unlikely to embrace that kind of downer ending. An inkling of hope is always better than none at all, people are reticent to accept that humanity might lose. It doesn’t really matter that the entirety of the franchise suggests that humanity will never prevail, we want to believe we have power over death. The small victories of individuals over the slow, ever encroaching monsters are enough to make us forget that we are not escaping fate, merely delaying it.