Discover the strange legacy of this cross-border ’70s classic

Bring Me the Head of Alfredo Garcia has inspired everything from Barton Fink to Swiss Army Man. 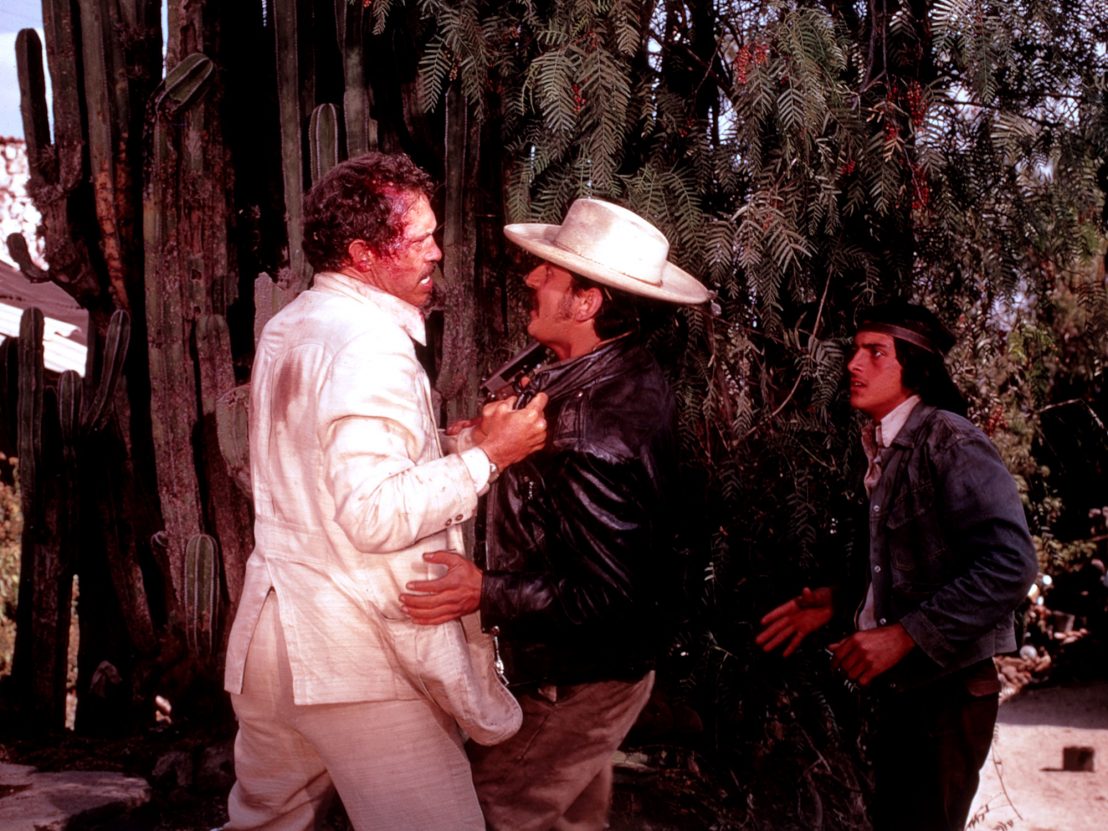 It begins with a still life – a static image of water fowl on a pond, accompanied by the gentle strumming of a Mexican folk guitar. The image comes to life as both birds and camera move, and a slow zoom out reveals a young, heavily pregnant woman reclining on the bank. The image is further disrupted as first a maid and then some armed horsemen arrive insisting (in Spanish) that the woman go see her father.

Her father, wealthy crime lord El Jefe (Emilio Fernández), wants to know who made his daughter a woman, and is willing to torture her to find out. Seeing a locket with a headshot of his daughter’s secret beloved, El Jefe (literally ‘the Boss’) complains, with an absurdity so nuanced that it takes a few seconds to register, “He was like a son to me,” before promising, “I’ll pay a million dollars to whoever brings me the head of Alfredo Garcia.”

Much as Sam Peckinpah’s Bring Me the Head of Alfredo Garcia begins – and ends – with freeze-frames, it is also preoccupied with that strange liminal space between life and death. In a later scene, slyly reprising that first Edenic image, Warren Oates’ protagonist (if not quite hero) Bennie will take random potshots from his passing car at roadside fowl (“Dinner for the pot!”, he shouts). Here death, hanging over everyone, is as arbitrary as it is inevitable.

Although nobody ever mentions this in the film, there’s a certain resemblance between Alfredo and Bennie. Both bear a similar moustache (as seen in that locket headshot), both share a love for local singer Elita (Isela Vega), and if Alfredo, unbeknownst to his pursuers, is already dead and buried, Bennie himself has one foot in the grave. A US Army veteran, he has ended up playing piano in dives South of the Border, drinking away and biding his time – a stranger in a strange land – until the end finally comes. And with his rigid facial expression half-hidden behind dark shades, Bennie even looks like the living dead – and he will soon, along with his old friend Alfredo, be returning, zombie- (or Christ-)like, from the grave.

Bennie is galvanised by the arrival of violent men. A pair of bounty hunters (Robert Webber, Gip Young) enters his Mexico City bar looking for Alfredo. Armed with knowledge of Alfredo’s whereabouts, Bennie spots an opportunity to emerge from his stasis and, with Elita, to “go somewhere new” – even if that involves disinterring Alfredo, and losing everything that Bennie holds dear.

The rest of the film represents an existential quest to paint value onto an apparently amoral and chaotic landscape. In this respect, it is not unlike a western – an impression maintained by the presence of vaqueros, or by the oater-inflected line, “Well, my friend, one must do what one must do.” At first Bennie is driven to action merely by the price on Alfredo’s head – a price dramatically depreciated for bottom feeders like himself – but soon this dead man walking will find himself driven by other considerations: vengeance, justice, redemption, even friendship.

For while Bring Me the Head of Alfredo Garcia is certainly a memento mori, replete with intimations of its characters’ corporeal nature and mortality, it is also, ultimately, a bizarre buddy pic, with Alfredo’s disembodied, fly-blown head the last confidant and compadre remaining to the increasingly unhinged Bennie.

As such, Bring Me the Head of Alfredo Garcia comes with a strange legacy, its influence palpable on films as disparate as Basket Case, Weekend at Bernie’s, Barton Fink and – especially – Swiss Army Man. Little surprise, perhaps, that contemporary critics and audiences were caught off guard by the bizarre tonal shifts of its cross-border journey into limbo. Upon its release in 1974 this low-budget work, the only film in Peckinpah’s long career over which he was allowed final cut, tanked at the box office – and merely invoking its title has since become a kind of joke, whether in Michael Ritchie’s 1985 film Fletch or BBC Radio’s ‘I’m Sorry I Haven’t A Clue’.

Yet it is now high time to reassess the film, with its special blend of melancholy, fatalism and necromancy, as a singular classic of 1970s cinema.

Bring Me the Head of Alfredo Garcia is released by Arrow in a brand new 4K restoration on a limited edition Blu-ray from 23 January.