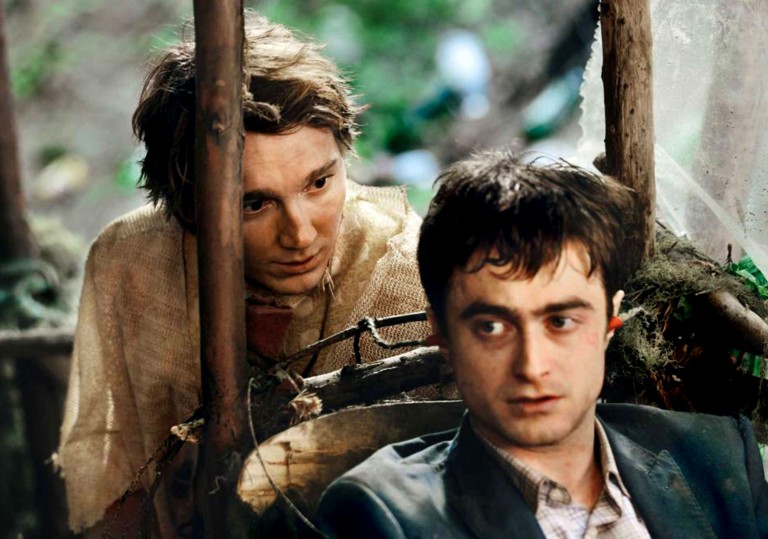 Intrigued by the Dano-Radcliffe double team.

There’s enough of a spark here to suggest that Daniels will move on to bigger and better things.

David Jenkins: So this is a conversation review of Swiss Army Man, which is coming out in the UK on 30 September. It’s directed by two guys called Daniel Kwan and Daniel Scheinert, who have styled themselves as ‘Daniels’. The film is essentially a parable about a guy, played by Paul Dano, who has washed up on a desert island. We meet him at the point where he’s about to hang himself. Then, just out of the corner of his eye, he sees a corpse wash up on the beach in front of him, which happens to be played by Daniel Radcliffe. The film is a series of sketches about the ways in which this corpse played by Daniel Radcliffe helps Paul Dano to survive and re-enter civilisation.

Adam Woodward: We should add at this point that the gimmick of the movie is that the Daniel Radcliffe corpse passes wind a lot. This device is used throughout the film – there’s a scene involving fart-propelled jet-skiing… My first question is, is this a comedy?

DJ: This has become the sales hook for the film. It’s ‘the Daniel Radcliffe Farting Corpse Film’. I guess the reason for doing this conversation review is, the film is an intimate two-hander between Radcliffe and Dano and it progresses from the gimmick of the “Swiss-army” corpse to… something else. It loops around a lot, and by the end it justifies the farts.

AW: Full disclosure: I didn’t really get anything out of it, apart from the slightly random Shane Carruth cameo at the end. But I did have this sense that it will probably be someone’s favourite movie. I want to try and get to the root of that.

DJ: I agree. I don’t think anyone’s actually going to ‘like’ this movie. But I think it’s going to be a film that people are going to want to talk about. I mean, the one thing I often think about when watching films like this is: how and why did this get made? From the start of the film I was pondering, ‘Wow, there’s some really deep-pocketed investors out there who just want to give money to quite a silly film.’ Throw caution to the wind. My disappointment came out of the fact that as the film goes on, it becomes more obvious why someone would pay to make it. Which, for me, is its downfall.

AW: Yeah. Just to go back a little bit – when you say that the corpse is played by Daniel Radcliffe, it’s worth noting that he is acting in this movie quite a bit.

DJ: Is that a spoiler?

AW: I don’t think so. It’s more to say that it’s not Weekend at Bernie’s. There’s more to it than meets the eye. I think it’s important to say, it’s not in the trailer anywhere, but it kind of feeds into the film’s hyper-realism, and that was the thing I couldn’t really get past. Not so much that is was going for this hyper-real tone and aesthetic, but that it jars so heavily with the film that it becomes.

DJ: The Daniels use Daniel Radcliffe as a reason for Paul Dano’s character to exist. We never know why he’s on this island. You suspect right from the beginning that this isn’t a literal depiction of a cast-away. But Radcliffe is this sounding board for Dano to basically talk about his worldview and air all his troubles and anxieties. And it all just gets a bit, ugh….

AW: It’s also a kind of road movie. They go on this big journey together… If it was them just on this desert island, I don’t know I think it would be enough to make a film from.

DJ: There are points where, almost by necessity rather than need, it turns into a sort of slightly Spike Jonze, Michel Gondry kind of thing.

AW: It wants to take you on this big journey, this fantastic voyage, and I felt like the destination just wasn’t worth it. And it’s not just the farting, there’s a lot of physical comedy and slapstick stuff here, but at the same time it’s striving to hit this euphoric peak. I’m not sure whether M83 are even on the soundtrack, but it feels very superficial.

DJ: You definitely get the feeling that the Daniels have earned their spurs in some area of the filmmaking industry. They’ve been given a pass to do their crazy mad film.

AW: It’s refreshing to see two decent actors and a big film company backing a film like this, which is a really original idea. It feels like they’ve been allowed to make the kind of film they wanted to make.

DJ: I agree. This could be a case study for when we talk about how there’s nothing on at the cinema, it’s all the same kind of middle-brow costume drama or whatever. This is something different, for better and for worse. A midnight movie that rose above its station.

AW: Personally it didn’t jive with me, but then I didn’t think it was very funny or very fun. Everything is telling you that that’s what it is, but there’s something, I don’t know what it is, a disconnect?

DJ: A ‘pleased with itself’ vibe, especially the opening credits – the scene in which farting Daniel Radcliffe becomes a jet-ski and gets Paul Dano back to the mainland. That shot is filmed in slo-mo, and it’s kind of a shame because it’s basically the best shot in the film and it’s over in the first five minutes. It’s probably already a gif.

AW: Without ruining anything for anyone who hasn’t seen the film who wants to see it, what did you think of the ending? It left me with a sour taste. I think it’s a definitely case of wanting to have its cake and eat it by trying to inject a bit of pathos at the end. I left really not liking Paul Dano’s character.

DJ: To be honest, not that liking or disliking is an inherently good or bad thing, but I kind of felt indifferent towards it.

AW: Which is arguably even worse… It’s a film which needs a message and I just don’t think that comes through.

Intrigued by the Dano-Radcliffe double team.

There’s enough of a spark here to suggest that Daniels will move on to bigger and better things.