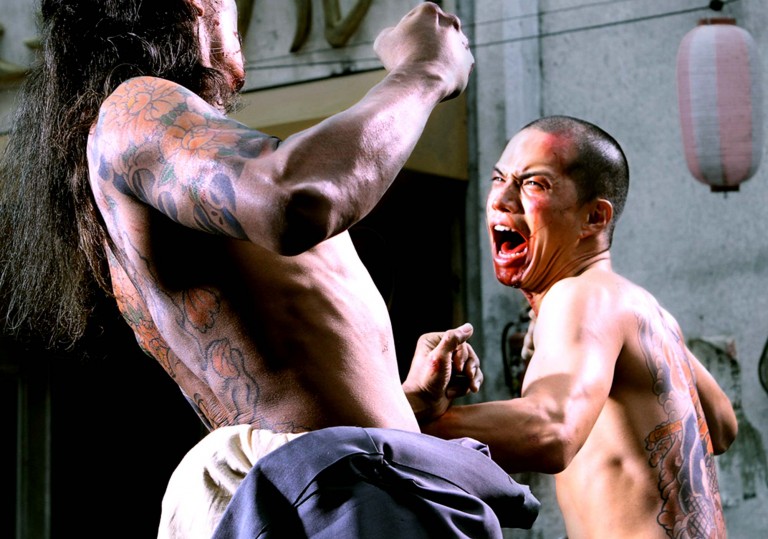 Lauded as a midnight treat when it premiered at the 2015 Cannes Film Festival.

A few creative sparks and moments of kitsch delight, but not enough to justify this.

Lot’s of people give Woody Allen shit for keeping to his strict schedule of one movie per year without fail. Maybe if he put the brakes on, allowed an idea to percolate and enrich a bit, then maybe his success rate would be a little higher? Or, at least, he might make a movie which didn’t feel like it was punched out to order, or as a way of merely maintaining a personal timetable.

The same could be said of Japan’s Takaski Miike, whose production line style of filmmaking means that we get lots and lots of very mediocre movies that make it across the pass – with the odd burnished gem such as 13 Assassins cropping up among the rabble as well – and little in the way of quality control.

Yakuza Apocalypse lives up to its wacky title, but that’s about it. What begins as a rudimentary gangster movie set in a small recession-hit town begins to reveal its colourful cards as something a little more creative and arcane. Why are those goons being kept in a basement and forced to knit? Why is that English-speaking monk dragging a Django-like coffin on his back? Is that nerdy tourist in the high-waste jeans (Yayan Ruhian) actually that dude out of The Raid 2?

Our dull hero is Hayato Ichihara’s Kagayama, a second-rung Yakuza enforcer smitten by the colourful backpiece tattoo of benevolent local boss, Kamiura (Lily Franky), who has to take over the concern when he witnesses friend and mentor having his head torn off, and then is turned into a vampire when bitten while inspecting the severed noggin.

And from there, all bets are off and egregious, tiresome stupidity reigns. Protracted martial arts sequences take over, intercut with scenes of people talking in rooms. A man dressed as a giant frog who is billed as the world’s most dangerous terrorist enters the fray, which is quite funny for about two minutes, but loses its shine after 40.

There are moments where Miike lifts a stock gag to a higher plateau in the way he films it, such as the moment where the brain fluid pouring out of a woman’s ears produces a mini rainbow as it flows to the pavement. But these moments are few and far between.

Lauded as a midnight treat when it premiered at the 2015 Cannes Film Festival.

A few creative sparks and moments of kitsch delight, but not enough to justify this.