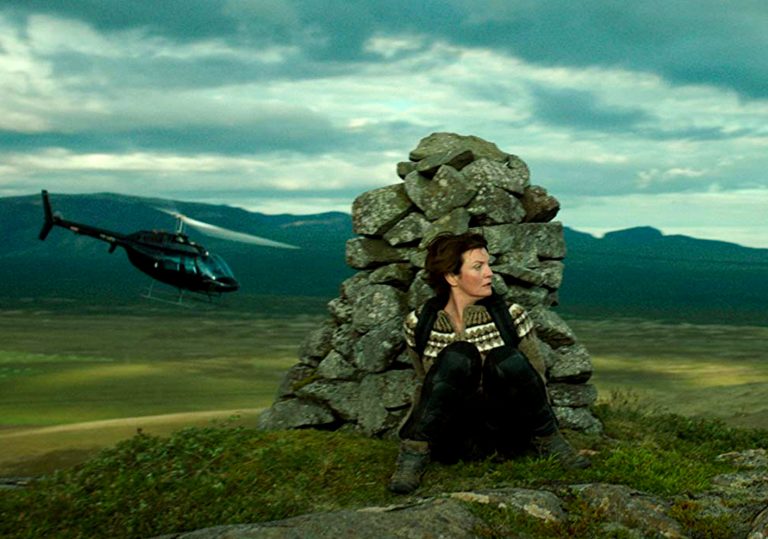 Here’s all the smarts of the Ocean family in one Semtex-lovin’ lady!

A hopepunk story of kicking against the pricks in middle age.

The pop cultural landscape has pined for an eco-warrior since Captain Planet was cancelled in 1996. Choir teacher by day, green renegade by night, Halla (Halldóra Geirharðsdóttir) takes up this vital mantle on her quest to rid the Icelandic highlands of a Rio Tinto aluminium plant. When her long-forgotten application to adopt a child is suddenly approved, the down-to-earth insurgent must reconsider her notions of motherhood, civic duty and herodom.

Woman at War spins gold from several contemporary fixations. One thread explores the modern woman’s quest to Have It All (in this instance: a choir, a crossbow and a Ukrainian orphan). Another strand examines the commercial chokehold on Earth’s diminishing natural resources; how big business disrupts farming families who’ve cared for their land over many millennia. A third critiques government surveillance and its by-products, such as the fear-mongering propaganda churned out by mass media, stoking a toxic news cycle.

These themes could easily make for a middling rom-com, or a gritty political pot-boiler, but director Benedikt Erlingsson isn’t here to cash-in on the zeitgeist’s lowest hanging fruit. He weaves a captivating dark comedy from these urgent, quite chilling issues, grounding them in Geirharðsdóttir’s staunch performances (she doubles as Halla’s pacifist yogi twin Ása).

Halla is the perfect Robin Hood-type renegade. At 49, she’s barely noticed, let alone suspected of domestic terrorism. More fool the feds, because ‘The Mountain Woman’ – as she signs her manifesto – is whip-smart, meticulous and determined. It’s a thrill to watch her master plan in action, as Erlingsson rolls out the spiciest how-to hijinks of a heist film. Halla uses every trick up her sleeve, including one that whiffs of Han and Luke’s tauntaun sleeping bag.

As per the director’s previous drama Of Horses and Men, from 2013, Woman at War surveys Mother Nature’s role in Icelandic culture. Both films are tinged by a pastoral palette of green, brown and grey, with a similarly dry sense of humour. Bucolic panoramas take in the rolling countryside, only to be interrupted by vision from heat-sensing drones, hot on Halla’s tail, to bizarrely comic effect. When farmer Sveinbjörn (Jóhann Sigurðarson) screams “Woman!” at the vigilante on his property, it’s not entirely clear whether he’s addressing Halla or his sheepdog. Turns out, it’s the latter.

But the most enchanting element of this odd, mischievous film is the on-screen presence of a three-piece band. The pianist, drummer and sousaphonist – later complemented by a trio of Ukrainian folk singers – create a stark tonal contrast to Halla’s serene choir. These curious musicians serve as something of a Greek chorus, appearing at each high-stakes juncture to belie the heroine’s calm exterior with their staccato rhythms, refugee melodies. Sometimes they even gaze at the camera, catching the viewer’s eye as if it to say, ‘I know, right.’

Big budget superhero flicks are a dime a dozen. Woman at War takes a sidelong glance at what it means to look, sound and act like a fighter – one hellbent on serving the world’s greater good.

Here’s all the smarts of the Ocean family in one Semtex-lovin’ lady!

A hopepunk story of kicking against the pricks in middle age. 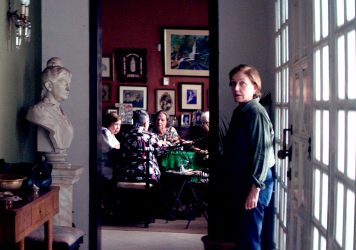 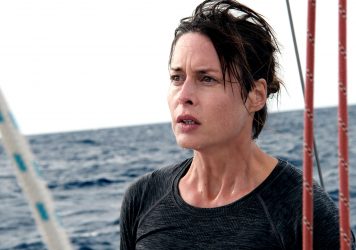 Susanne Wolff plays a woman lost at sea in this smart nautical allegory from Wolfgang Fischer.