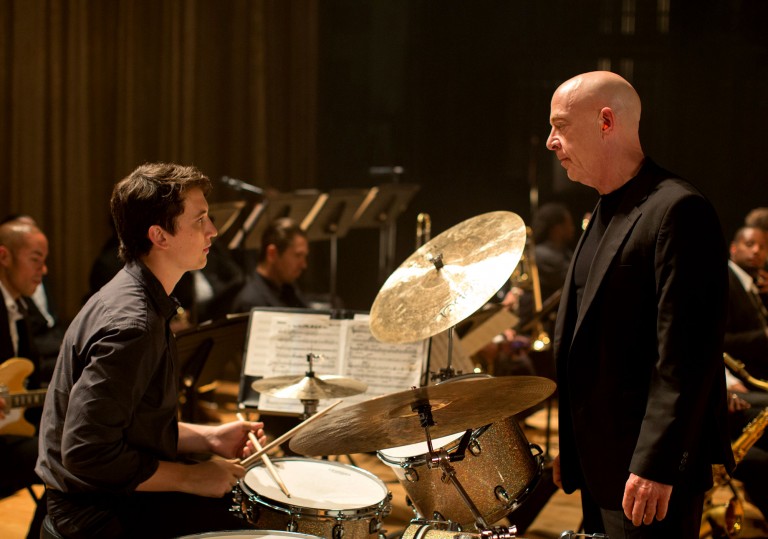 Drummed up symphonious praise on the festival circuit.

A cracking effort from all concerned.

Blood, sweat and a hideous use of the term “faggot” flow amid rolling abuse that is homophobic, sexist and all shades of offensive. It spills out of the mouth of Terence Fletcher (JK Simmons) and infects the ears of his young protégés — fearful, sad-eyed obsessives. This verbal ugliness — off-putting though it may be — is intentional and just one note of the multi-instrumental jazz-band that makes up Whiplash.

Damien Chazelle’s film feeds off his experience as a student drummer. It asks questions like: ‘Where is the line between motivation and abuse?’, ‘What would you sacrifice to be creatively great?’ and ‘Who cares what you do when you’ve set out your stall as a revolting human being?’ It does so within a tightly told, euphorically shot tale of an ambitious drummer’s relationship with a psychopathic teacher.

We’re at the fictional Shaffer Conservatory of Music in New York City — “the best music school in America.” Andrew Neiman (Miles Teller) is introduced through a doorway as he practices alone, his drumming accelerating until it is one continuous noise. The camera slowly glides along the corridor and through the door. Andrew looks up and the shot reveals itself as being from the perspective of Fletcher, the black-clad, bulging-eyed conductor of the first band. Andrew’s jaw drops as if it was the Messiah himself.

Whiplash moves to comic beats, just one of its many shape-shifting skills. Simmons is a beloved comic actor and he spits out lines at the right tempo to front them as hilarious. For a short spell he could be the loveable rogue, just as Andrew could be an introverted hero destined to flower and be redeemed through musical recognition. Chazelle plays with our presumptions. When Andrew shyly asks out Nicole (Melissa Benoist), the sweet babe who works at the cinema, he seems to be headed down that exact path.

‘What if success doesn’t suit a person?’ is another question the film asks amid intense practice sessions. Andrew drums until he bleeds, listening to Buddy Rich and shutting out the world beyond Shaffer’s dark mahogany-lined rooms. Simmons (in jest?) has referred to Teller as a “contemptible little prick”. Teller’s recourse to sneering and opaque distancing techniques increasingly makes his Andrew something of an asp in the bosom. All the while Chazelle’s method of shooting his drumming and the rest of the band players is earnest and loving. Musical reverence is a given. It’s where passion can sanely conjoin with the rest of the world that is routinely called into question.

This is a rabidly intelligent debut with a finale that is a fast-paced montage shot from above and below, in close up and in wide, cutting from instrument to instrument in perfect time to jazz standard, ‘Caravan’. As pumping a finale as this is, there are sufficient reminders along the way that one man’s dream is another’s grotesque isolation. Chazelle has made a film that entertains as it interrogates. One final question is: when the abuser wants from you exactly what you want out of yourself, can you still call it abuse?

Drummed up symphonious praise on the festival circuit.

A cracking effort from all concerned.