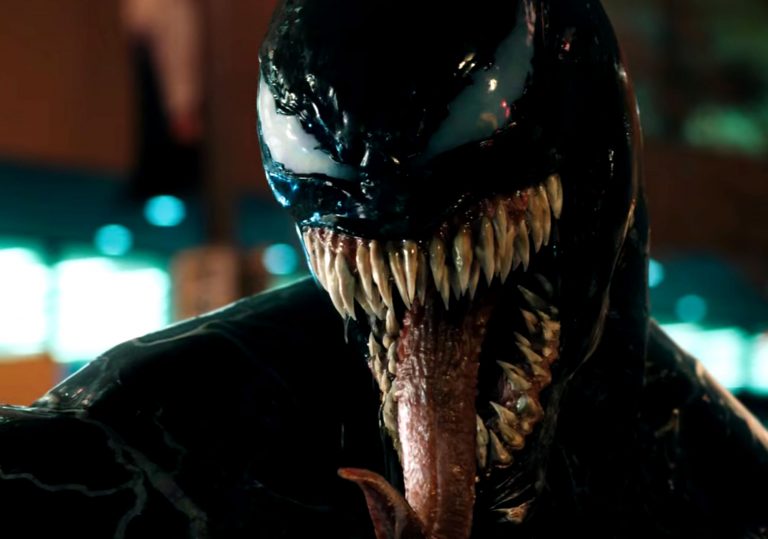 Sony attempts to make up for past failings (again), but this time with Tom Hardy in tow.

Nowhere near as edgy or exciting as it should have been.

At various points during Venom, apparently intelligent characters make the same baffling suggestion: that Tom Hardy’s Eddie Brock, whose body has been forcibly fused with a sentient alien organism, is simply suffering from a garden variety parasite. Hardy jumps into a tank of lobsters at a posh restaurant and proceeds to munch hungrily on one of the live crustaceans. Best check his temperature. Hardy starts violently mutating during a routine MRI scan. A course of meds should straighten him out. Hardy shape-shifts into a nightmarish creature before devouring a petty criminal whole in front of a store clerk. Yeah, you might want to get that looked at, mate.

It’s hard to suspend your disbelief and immerse yourself in a fantastical story when the script actively discourages it. Yes, this is a comic book movie that doesn’t take itself too seriously – which is always to be encouraged – but it’s also one where characters say and do improbably stupid things, to the extent that lines of expository dialogue and casually ignorant remarks feel like an open insult to the audience’s basic intelligence. It’s a shame, because the principal cast are all fully committed to their roles. Not least Hardy, whose sweaty fits of rage and trademark combustible energy powers the film for two frenetic hours.

That said, Hardy’s intense, powder keg performance feels strangely out of step with the jocular tone director Ruben Fleischer (previously of Zombieland fame and Gangster Squad infamy) attempts to strike. The actor has revealed that his favourite 40 minutes of Venom ended up on the cutting room floor: “Mad puppeteering scenes, dark comedy scenes”. Regardless of whether or not these scenes were nixed in order to secure the desired PG-13 rating, you get the sense this is not the movie Hardy thought he was making.

There is a half decent body horror-sci-fi hybrid buried somewhere in this film – something in the vein of techy viral thrillers like Life, Prometheus and Upgrade (the latter two of which, incidentally, star Hardy lookalike Logan Marshall-Green), only darker, edgier, more dangerous. Alas, Venom is essentially ‘The Strange Case of Jekyll and Hyde’ reimagined as a freaky body swap comedy, with the eponymous antagonist pitched as a sassy sidekick/alter-ego, aggressively co-opting Hardy’s brawny journalist before proceeding to lark about in San Francisco. (Also incidentally, Fleischer is attached to a feature-length adaptation of the BBC drama Jekyll along with Marvel stalwart Chris Evans: because movies.)

Brock, meanwhile, is a self-styled TV personality who gets solid ratings with his roving entertainment news show ‘The Eddie Brock Report’, but has a tendency to rub people up the wrong way – namely those who could do with being knocked down a peg or two, or are plainly just up to no good. His latest assignment-cum-target is business magnate Carlton Drake (played with cold-blooded relish by Riz Ahmed), whose Life Foundation is committed to pursuing human space colonisation by whatever ethically dubious means its egomaniac CEO deems necessary. 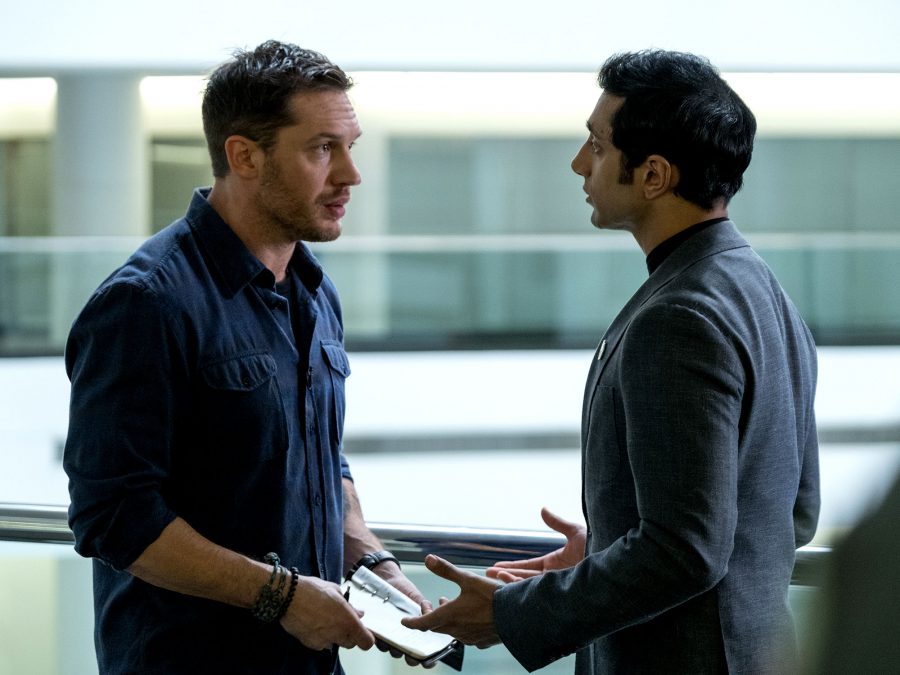 Completing the central trinity of reputable dramatic actors slumming it for a pay cheque is Michelle Williams as Brock’s high-flying lawyer fiancée, Anne Weying. Their relationship breaks down after Brock opens a sensitive work email of hers implicating Drake in the deaths of three volunteers in a mysterious medical trial. This simple act of domestic betrayal results in both Anne and Eddie losing their jobs, and sets in motion a sequence of events with far wider-reaching and more devastating consequences. (A tip for any aspiring lawyers out there: if you do happen to date a scurrilous reporter, be sure to disable push notifications on your desktop web browser.)

You may recall that Venom’s big screen debut came in Sam Raimi’s unfairly maligned but overstuffed 2007 trilogy closer Spider-Man 3, care of Topher Grace. It was recently reported, however, that the character only joined that particular party at the behest of producer Avi Arad (Raimi originally wanted to introduce Vulture to the series). Sony’s second roll of the dice is a marked improvement in terms of casting and character development, and there’s some nifty CGI in the mix, too, especially in the visceral transformation scenes – but there is still something fundamentally lacking.

In its bid to appeal to a mainstream family audience, the film makes certain concessions that amount to an undermining of the character’s essential appeal, which stems from its ruthless, murderous tendencies. ‘The world has enough superheroes’ sneers the film’s tagline. True, but this is a cynical, sanitised take on Marvel’s Spidey-bothering baddie. There are just so many horrible, wrong-headed artistic choices made here. In one scene the amorphous ‘symbiote’ latches on to a female host, and though this brief interjection has absolutely no bearing on the plot, it’s a moment that will sear your soul. Suffice to say you won’t be able to unsee Girl Venom’s shapely bosom and tight butt.

By the time Fleischer and his four-man screenwriting team implore us to take pity on Venom – this grotesque monster is not so different from you or I, you see – whatever lingering investment in the character and narrative we had instantly evaporates. This film, then, is less like a hostile parasite and more like one of those 24-hour bugs that always seem to be going around: you feel rough for a while, but it quickly passes and is soon forgotten about.

Sony attempts to make up for past failings (again), but this time with Tom Hardy in tow.

Nowhere near as edgy or exciting as it should have been.