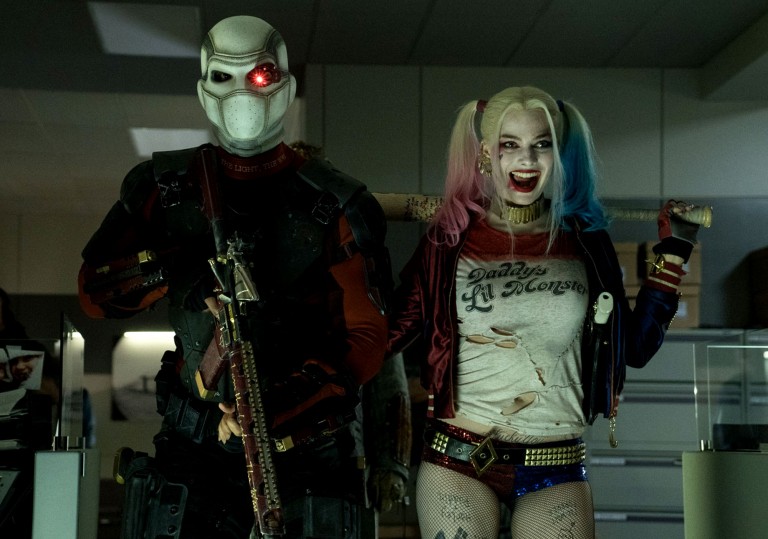 An odd, uncomplicated movie that epitomises the trailerfication of modern blockbusters.

What are movies for? Well, depending on who you ask, their function can be to educate or enlighten, telling stories that expand our understanding of the world by transporting us to actual or entirely imagined places. But movies are also mass entertainment, at least at the very top end of the scale; products created, packaged and released according to prevailing market forces. As consumers, we like to think that what we say and think has some influence on the kinds of movies that are produced. But it doesn’t. Not really.

We live in an age where vast communities of over-indulged, under-sexed fans have collectively bought into the idea that movies like Suicide Squad are made with their best interests at heart. Yet fan power is one of the great myths of our era – the result of carefully cultivated global fan bases which Hollywood mobilises as and when it pleases. Which is not to say that true fans count for squat. Deadpool was successful precisely because it spoke to its audience in their own language, but the reality is that a project being financed off the back of some leaked test footage is no more evidence of fan power than it is a victory for agile market research.

Throughout all the usual pre-game build up, Suicide Squad writer/director David “Fuck Marvel” Ayer has been at great pains to reassure DC fans, as he is contractually obliged to, that he is one of them, that this movie is for them. Even if you sincerely believe that, it doesn’t change the fact that the only people Ayer needed to placate in the first place are the studio bean counters who have the power to greenlight his next project. Still, the meticulous grooming of “built-in” audiences long before production even gets underway reveals something of the cynical and insidious nature of modern moviemaking. Because while Suicide Squad is unlikely to surpass many people’s inflated expectations, from a marketing point of view it is an emphatic slam dunk.

DC and Warner Bros are playing the long game, after all, and although a lot still depends on how this particular assemblage is received, they know that whipping fans into a state of linen-moistening hysteria is the only insurance policy they need. Even if Suicide Squad doesn’t break box office records, these twinned studios will continue to engender a sense of entitlement and empowerment among fans as they look to expand their embryonic cinematic universe. Have superhero blockbusters become too big to fail? Perhaps, but maybe it’s more a case of traditionally risk averse studios shifting their priorities, investing more time and energy into engaging their target audience months, if not years, before the point of purchase.

It should come as no surprise that Suicide Squad feels like an extended trailer because – doy – that’s exactly what it is: a two-hour drum roll for future DCEU instalments which epitomises the wider trailerfication of blockbuster cinema. Reports that Suicide Squad was recut to be more like its terrific ‘Bohemian Rhapsody’ beat-matched trailer may be accurate or completely wide of the mark (reshoots and recuts are par for the course for major studio productions), but what’s clear enough is that packaging and promotion are now as important than the final product.

That early teaser has been viewed over 57 million times since it was released back in January, and it has been proceeded by a steady stream of equally lurid, similarly effective advertising. If just a quarter of those people make the trip to their local multiplex on opening weekend, then Suicide Squad will have made back its $250m budget plus change. Remember, this isn’t Batman or Superman we’re talking about but a bunch of second string comic-book characters whose pop culture stock was comparatively low up until very recently. That this is one of the most anticipated movies of the year is pretty incredible when you stop and think about it.

Any film that announces itself as brashly and forcefully as this is invariably going to come under intense scrutiny from critics and fans alike. As a result, in this instance it’s hard to shake the feeling that not everyone behind the scenes was on the same page. Tonally it’s all over the place. The pop music soundtracked action sequences are tame. The story, which sees a task force of sociopathic antiheroes assigned to take down an evil gyrating sorceress (a miscast Cara Delevingne) in an epic two-act battle royale, is a little undercooked. And even though the film’s anarchic, unpredictable humour – intentional or otherwise – is part of the charm, most of the gags land well within Marvel’s wheelhouse.

Still, despite some serious flaws, Suicide Squad has a lot going for it, most notably some cracking female characters (take a bow Viola Davis, as federal puppet master Amanda Waller, and Margot Robbie, as psycho Barbie Harley Quinn), not to mention Jared Leto’s blinged-up, bugged-out Joker and Will Smith’s wise-ass assassin, Deadshot. Divisive though it may prove to be, ironically it’s the film itself that is polarised, which makes the whole thing oddly compelling in a violent high-speed collision kind of way. Like us, you may be left wondering what might have been had Ayer opted to do something darker with the material.

The consensus now is that, try as they might, DC just can’t seem to find the right formula. But do they really need to? That’s the bigger concern – the studios behind the superhero boom have a huge mandate to keep their word, but it’s actually safer for them to consistently over-promise and under-deliver rather than simply churn out good to average movies with minimal hype. Remember the sensational first trailer for Man of Steel? Remember how much Man of Steel sucked? Yet it still made a buttload of cash, paving the way for an underwhelming sequel and an expanded slate that’s set to take us through to 2020. This pattern doesn’t look like being broken any time soon. There will be more misses and hopefully a few hits along the way. So let’s start taking these movies, one by one, for what they are: populist confectionary.

Suicide Squad won’t change your life, but it’s good (un)clean, silly fun that doesn’t demand to be taken seriously (one of the main characters is called Captain Boomerang, ferchrisakes!), and as such it is one of the more refreshingly uncomplicated summer blockbusters in recent memory.

An odd, uncomplicated movie that epitomises the trailerfication of modern blockbusters.