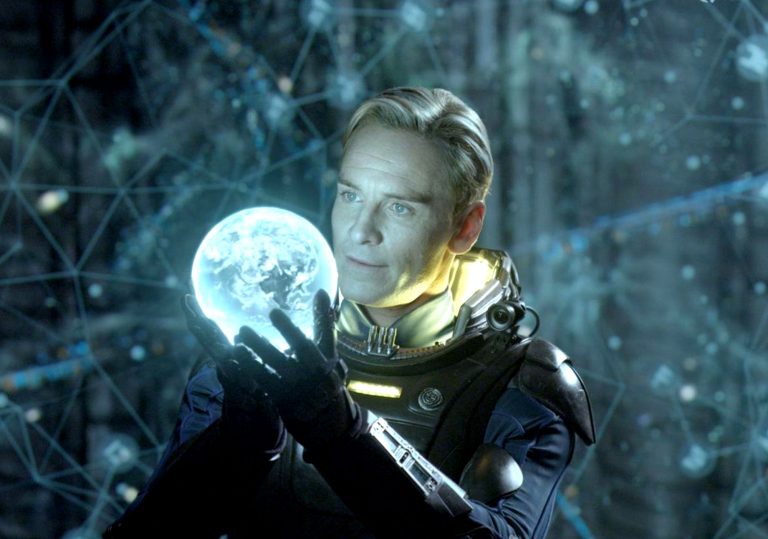 There is a logical flaw at the heart of Prometheus, the jaw-slackening but intellectually wayward new film from Alien director Ridley Scott. Over the course of two hours, billions of light-years and one central mystery, Scott takes us on a journey driven by a single, persistent question: why? It is the question, Scott suggests, that defines us as humans. And yet – tantalisingly? Infuriatingly? Unforgivably? – his film refuses to offer us an answer. “Why?” you will indeed ask. “Find out next week,” the film will reply.

Returning to the science-fiction milieu of previous triumphs – returning, in fact, to the same narrative universe as his 1979 classic if not, exactly, the same cinematic topography – Scott has crafted something spectacular but hollow.

No amount of fanfare can prepare you for the exquisite visual riches of Prometheus. Scott pitches us into his film like a god, spilling the audience from the palm of his hand into a starscape of spinning planets, ion drives and alien technology. Witnessed in vertiginous IMAX, your first instinct is to cower in awe. But it’s not (just) the mystery of the universe that the film is calling to our attention. Prometheus is a hubristic, self-reflexive exercise. “Look at this,” Scott says. And then, “Look at me!”

It is this self-reflexivity, as much as the familiar elements of the Alien universe, that makes Prometheus a film of returns; an Odyssey back towards something that remains out of reach. For the crew of the ship – a rag-tag band of scientists and ambitious corporate officers – it’s a communion with the ‘Engineers’, an alien race who left clues to their whereabouts on Earth many millennia before. For the audience, it’s the chance to relive that original experience, to be brought face-to-face once again with the xenomorphs and wonder whether, this time, anyone will hear us scream.

There are hints and reminders of those previous films littered throughout Prometheus, but for the most part they’re as ossified as the corpses the crew find on the alien homeworld. Shrouded in echoes of other films, it’s easy to judge Prometheus for what it isn’t because it isn’t a patch on the two movies that made the franchise.

Lacking both the iron-clad characterisation and gut-wrenching tension of Alien, or the gung-ho charisma of its James Cameron-helmed sequel, Prometheus relies instead on some careworn horror tactics that see its supposedly hand-picked crew of geniuses doing some catastrophically stupid things. Whether it’s a biologist who greets a new lifeform by trying to pet it like a dog; the expedition leader who gets drunk on the first night; or the ship’s captain who abandons two stranded men to get laid, the film repeatedly, wilfully, stretches credulity beyond breaking point.

In fact, you don’t need to hold Prometheus to the impossible standard of its heritage to find it lacking. It has more in common with Danny Boyle’s Sunshine and Paul Anderson’s Event Horizon than previous Alien movies, and even those comparisons don’t always flatter it.

In part, this is a function, or at least a consequence, of its ambition. Prometheus is as promiscuous with ideas as it is stuffed with spectacle. Faith, humanity, nature, identity – all of them are thrown into the mix alongside the more resonant franchise staples: sex, pregnancy, birth, gender. But where once they were left as subtext, Scott drags them out into the light (or what passes for the light in the dim murk of planet LV-223) where they suddenly look a little thin.

No one should be criticised for trying to up the IQ level of the average blockbuster, but there’s a superficial, sophomoric quality to the film’s intelligence. Like it doesn’t really matter because, hey, no one’s really listening anyway.

And so it comes down to a few scenes and a few performances that really linger in the memory. They propel Prometheus beyond the ordinary (because it is, in so many respects, extraordinary). Michael Fassbender excels as the android, David, who is entranced by Lawrence of Arabia but must somewhere have secreted a copy of Pinocchio. And there is Charlize Theron, supremely icy as the mission commander whose fate clumsily and unfairly casts her as this instalment’s Carter Burke.

But above all there is The Scene. The one that will be talked about but maybe not here. It is the point at which Noomi Rapace’s Elizabeth Shaw escapes the ghost of Ripley, if only for a second, and creates an iconic moment that will forever be hers. You’ll know it when you see it. If you can watch it.

But finally, Prometheus returns to that inevitable question: why? Why make the film? Because there was both appetite and opportunity. Why move away from so much that made the Alien franchise great? Because that was then and this is now. Why set us up for an answer you’re not prepared to give? Because of shameless studio greed. Maybe it will work. Maybe Prometheus will snap more clearly into focus with the hindsight afforded by additional sequels. Maybe the price we have to pay for a future classic is a crushing sense of present disappointment.