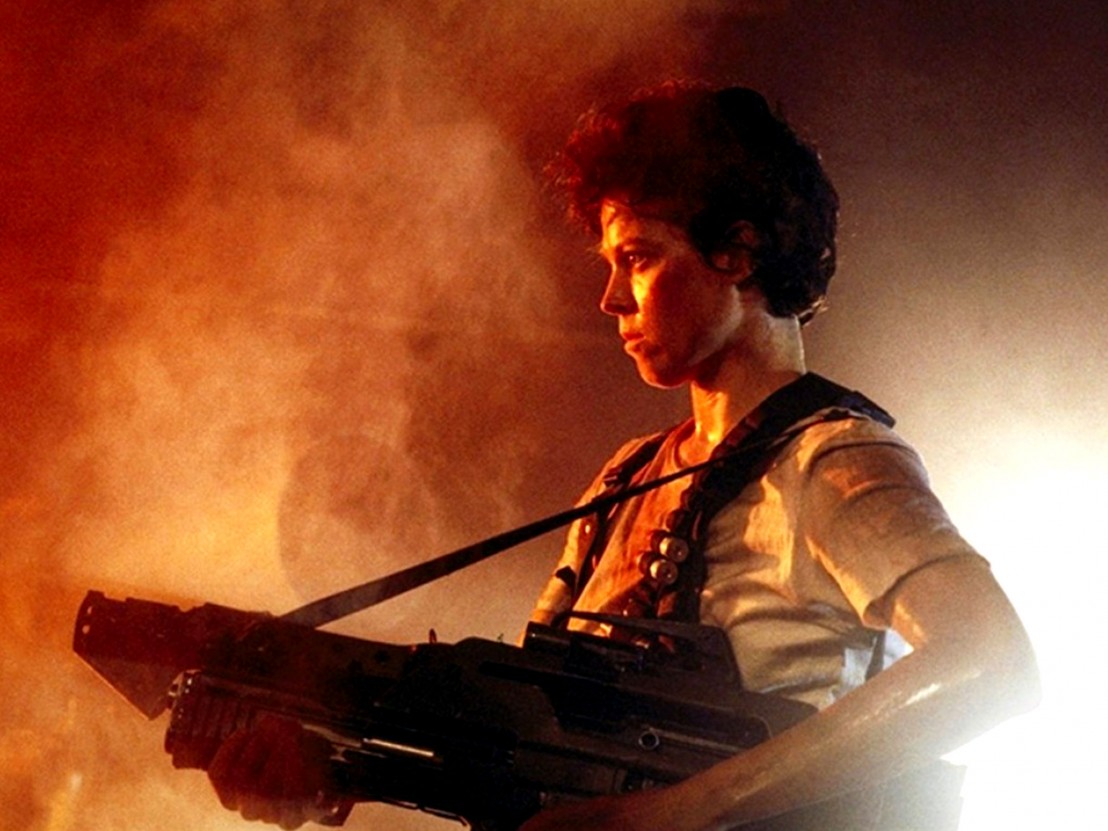 “In 19 minutes, this area’s gonna be a cloud of vapour the size of Nebraska,” warns Bishop during a pivotal scene in James Cameron’s Aliens. Injured and exhausted, Ripley (Sigourney Weaver) straps herself with a pulse rifle, a flame thrower, and the locator Duct-taped together – plus some M40 grenades and M-94 marking flares – and sets out into certain death to rescue her surrogate daughter Newt. This scene doesn’t exactly scream “maternal instinct” but that’s exactly what it portrays and one of the reasons why the film remains a potent example of feminist cinema.

One of the most successful R-rated films ever, Aliens was probably never intended to become a beacon of feminist hope. The fact it passes the Bechdel test is purely coincidental, but it’s because of these reasons, not in spite of them, that this genre classic became such an positive symbol of gender equality. Aliens is not a women’s story, but it is a woman’s story, and this was perhaps something the film’s production company 20th Century Fox didn’t think they could bank on for a second time. The studio originally requested that Cameron write Ellen Ripley out due to a pay dispute. Instead, thanks to the director’s persistence, they ended up paying Sigourney Weaver 30 times more than what she earned for Alien.

From the start, Weaver intended to play the role of Ripley with a matter-of-factness. She felt that Ripley’s beliefs were rattled when, as she put it, “she suddenly has to work on instinct and emotion rather than intellect.” This is what makes the character such a enduring feminist icon: Ripley isn’t tough like a man, she’s tough like a woman.

To highlight the difference, take Jenette Goldstein’s incredible turn as Private Vasquez. Butch, muscular, aggressive and fearless, Vasquez plays the stereotypical gun-toting tough chick; bad-ass because she is more masculine than feminine. Ripley, on the other hand, doesn’t run gracefully, can’t throw a strap of grenades very far, is physically vulnerable and rather emotional – and yet she is also a force to be reckoned with, not only to her colleagues but to her superiors. She earns respect as an individual irrespective of her gender, for her courage, decisiveness, leadership, stamina and iron will.

In contrast to most horror/action films, the female lead in Aliens is not there for our viewing pleasure, recumbent and defined by the male lead. Ripley is there to carry the story and take us on a journey. She isn’t made-up or dressed in flattering clothes, her hair doesn’t billow and while she does make an appearance in her underwear, so do the men. And unlike the titillating strip scene in Alien, Ripley’s semi-clad scene at the end of Aliens isn’t gratuitous; it signals the end of the ordeal as opposed to her vulnerability. Ripley isn’t seduced or dominated by any of the male characters, instead she functions as an equal, and because of her personal qualities and experience takes the lead amongst the group.

Finally, there’s the issue of motherhood. It’s true, women can and do have babies and it is a formative element of many women’s lives. And it’s true that many women, including non-mothers, possess the instinct to nurture and protect, virtues that aren’t typically associated with strength and power in action/horror cinema. But in this 1986 genre blockbuster, Ripley unashamedly displays all of these typically feminine characteristics and they’re not condescended to, ignored or even inconvenient; on the contrary, Ripley’s relationship with Newt is a driving force of her character and the narrative.

While Ridley Scott’s original might have paved the way for the character as an unlikely action hero, it was Cameron’s Aliens that solidified her as a champion for gender equality. Aliens stands as a culturally significant feminist artefact because of the fact that one sex doesn’t triumph over another. Womanhood is not compromised to fit into a man’s world, even in the face of a terrorising alien species. Both genders play an equal role in the fight for survival.