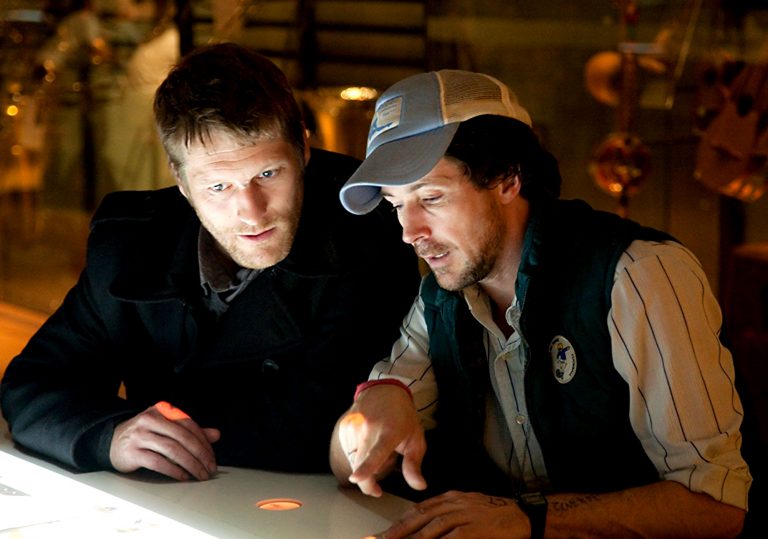 Jamie Thraves has been one to watch for some time, Aidan Gillen has clout, but has anybody been waiting for this?

Like a warm summer’s day in the arse-end of town, Jamie Thraves’ self-financed third feature is the genial, economical story of an unlikely but touching friendship between a disillusioned middle-class man and a cheerful chancer.

It begins when, without apparent warning or explanation, gentle giant Tom (Tom Fisher) walks out on his family and seemingly comfortable middle-class existence. He travels to London and, after an altercation with a tree, encounters – and unintentionally befriends – Aidan (Aidan Gillen) in the emergency room.

Managing to be spectacularly irritating, disarmingly friendly and highly comical, Aiden is an odd-job man living hand-to-mouth who, to Tom’s initial chagrin, takes to following him around like a loyal but noisy hound.

The film’s dalliances with brutality and realism are troubling reminders of just how deluded and vulnerable Aidan is. For instance, he’s involved with an attractive woman – Linda (Riann Steele) – his girlfriend in name only, who beats him and unashamedly uses him for cash. A mark of her degeneracy is that she is first glimpsed by Tom having sex with a menacing character in a graveyard.

Treacle Jr. is abundantly charming but, like Aidan, a touch too simple. Linda, for example, is little more than a villainous harridan and although Tom’s ambiguity is nicely essayed by Fisher, this lack of psychological illumination can on occasion frustrate. In its down-and-out outsider’s view of London it recalls Mike Leigh’s modern masterpiece Naked, which unfortunately makes it look rather insubstantial by comparison.

Nevertheless, it benefits from a marvellous momentum, powered by its roving, fluid camerawork and deliciously fitting soundtrack, and the central performances are a joy.

While Fisher is likably hang-dog, Aidan Gillen (in a welcome departure from playing hubristic scumbags) is unexpectedly hilarious as an effervescent motor-mouth possessed with unshakable optimism. In this he resembles The Fast Show’s enthusiastic Mancunian teenager who finds everything ‘brilliant!’ – and together Tom and Aidan make for a pleasingly mismatched duo.

Entertaining but a touch slight, one thing that’s in no doubt is that Treacle Jnr’s heart is in the right place; it is, after all, a film named after a kitten.

Jamie Thraves has been one to watch for some time, Aidan Gillen has clout, but has anybody been waiting for this?