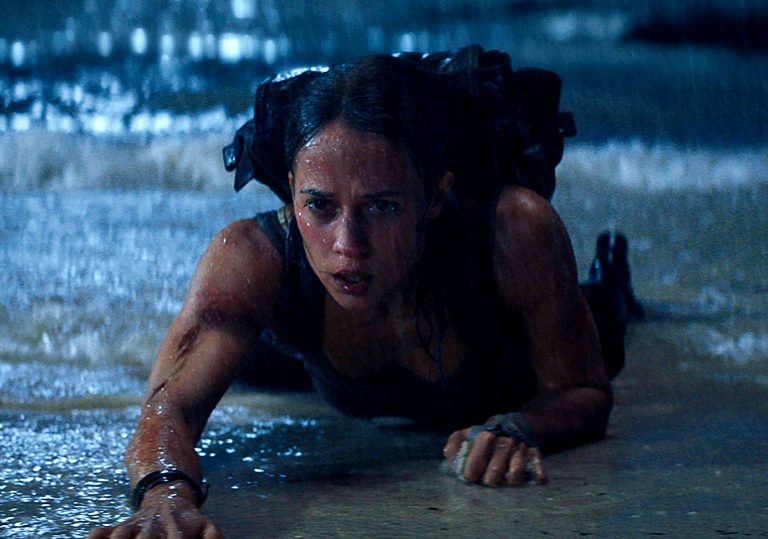 This looks a little too serious.

So pleasurable on so many levels.

Surprise: thinking about it does not make it any less good. Vulnerable Lara is a real hero.

As hard as it may be to admit, the original Tomb Raider movies are not very good. Though many of us have a soft spot for these relics of pre-Nolan, pre-Marvel Hollywood action cinema, revisiting Lara Croft: Tomb Raider and its torturously titled sequel Lara Croft Tomb Raider: The Cradle of Life today reveals just how far the genre has come in recent years.

Consistently ogling Angelina Jolie in the title role, these films attempted to work around their intensely objectifying gaze by placing themselves firmly in the realm of the unrealistic action epic. Borrowing liberally from Michael Bay, John Woo and ’90s music videos for their tongue-in-cheek aesthetic, they almost succeeded: if Jolie’s Croft looked amazing throughout, it was because of her astonishing physical capabilities as much as her amazing figure.

But Lara’s inhuman strength and sexiness, combined with predictable storylines and an increasingly irritating snarky tone, made the whole explosive enterprise feel rather flat.

Since Jolie’s last adventure, the Tomb Raider video game series has gone through a remarkable transformation. Rebooted with the modestly titled ‘Tomb Raider’ in 2013, a superior sequel soon followed with ‘Rise of the Tomb Raider’. A greater concern for realism in these games drew a lot of criticism from hardcore fans of the original games, nostalgic for Lara’s pyramidic breasts and impossible shorts. But this attention to reality is precisely what saved the series – and what makes this new adaptation work so well.

In Tomb Raider, helmed by Norwegian director Roar Uthaug, Lara is still the daughter of a man obsessed with relics and ancient tombs, but she’s also an ordinary young woman like you and me… Well, not quite. Almost all the men she engages with in the film’s early London-set sequences are in love with her – and who wouldn’t be? She is kind and beautiful, knows her Shakespeare, has Vikander’s glowing complexion, and has a taste for extreme sports. We are first introduced to her in a boxing ring, being utterly whooped by another woman. She suffers, but only taps out at the very last second. Like in the recent video games, she isn’t invincible. And like in those games, it’s for this reason that we care.

While avoiding the mind-numbing sensory and stupidity overload that the Jolie movies embraced, this reboot still maintains a healthy dose of unrealism and cheese. The film opens with a deliciously corny, old-school sequence of crossfades between maps, photographs and ancient artefacts. In voiceover, Dominic West (playing Lara’s father) recites the ancient tale of Himiko, a Japanese “mother of death” who once brought destruction upon everything she touched, and is now buried somewhere deep on a deserted island in the Devil’s Sea.

Reassured from the outset that there will be tomb raiding at some point in the film allows us to relax and enjoy the show before the real action truly begins. Following Lara, we soon learn that she works as a bicycle courier and witness her reckless participation in a thrilling illegal bike race through East London, taking huge risks in the hope of making a little extra money. As in the original game and films, her father was rich. But he has been missing for seven years, and Lara isn’t touching any of her inheritance because she refuses to accept his death.

When it looks as though she is finally ready to surrender and sign the papers on the recommendation of her guardian (Kristin Scott Thomas in sublime form), Lara is led by one of her father’s clues to a hidden room under the family burial plot. As it turns out, he was much more than a savvy businessman. In a video left for Lara, her father explains that after her mother died, he looked everywhere for proof of the supernatural. He tells the story of Himiko and how she might hold the key to resurrection – but Lara flinches, thinking he has gone mad. 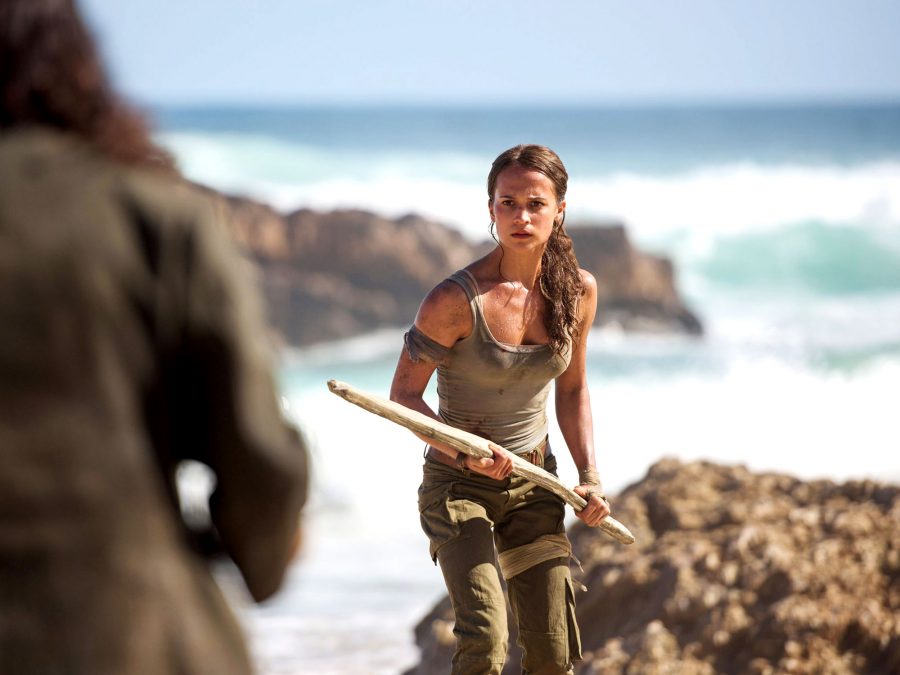 Aside from the refreshing manner in which the film is grounded in reality, the mere fact that Lara has bigger problems than how to get from A to B is thrilling. We invest in her story not because she sets off on a badass quest for some mystical object, but because she is propelled by a desperate need to find out what happened to her father. The film doesn’t go full Dark Knight however – it isn’t about the nature of good and evil, the sacredness of the father-daughter bond, or any fundamental issues. Above all it is about Lara becoming a tomb raider, and learning all the skills – and heartaches – that come with the job.

In Hong Kong, looking for the man who helped her father get to the island, she meets the sexiest, most objectified person in the film, Lu Ren, played by Daniel Wu. Even when lying down in pain later in the film, Lara herself is never objectified, and the male-female dynamic typically found in action movies is flipped. A terrific montage of their boat trip shows our heroine focused firmly on her mission, working out the coordinates and staring into the distance, while Lu looks at her in admiration, in awe of her courage and determination. That she doesn’t notice him is great; that he leaves her alone after that is nothing short of inspiring. Note to all blockbuster filmmakers: respecting women is extremely hot.

Clearly thought through with great care and attention to detail, all of the film’s action sequences manage to combine discreet homages to the recent video games with the demands of narrative cinema. Without spoiling too much, an early sequence sees Lara suddenly grab on to a metallic chain hanging from high above her to escape from her assailants – a signature move beautifully introduced as a little surprise right in the middle of an already superbly choreographed sequence.

Lara’s arrival on the island marks her first encounter with death and violence. Far from deserted, the location is controlled by the evil Mathias Vogel (a suitably terrifying Walton Goggins), who is using shipwrecked fishermen as slaves to dig out the same tomb searched by Laura’s father. He claims to have killed Mr Croft, but like us, Laura doesn’t fully realise the extent of this man’s cruelty and the horror of death until she witnesses him mercilessly executing an old enslaved man.

This genuinely shocking moment leaves Lara traumatised and silent. But Lu – always looking out for her – knows that she’s got to act, and so they fight back. Later in the film, Lara is forced to kill a guard in self defence. After the act is done, she looks at his face and cries. This sensitivity and realism elevates the stakes of the film to such an extent that, combined with its playfulness and inventiveness, we can already safely call Tomb Raider one of the year’s best action films.

This looks a little too serious.

So pleasurable on so many levels.

Surprise: thinking about it does not make it any less good. Vulnerable Lara is a real hero. 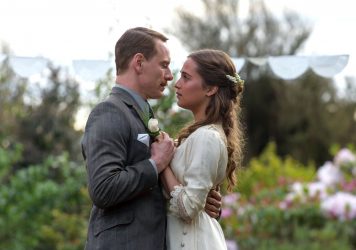