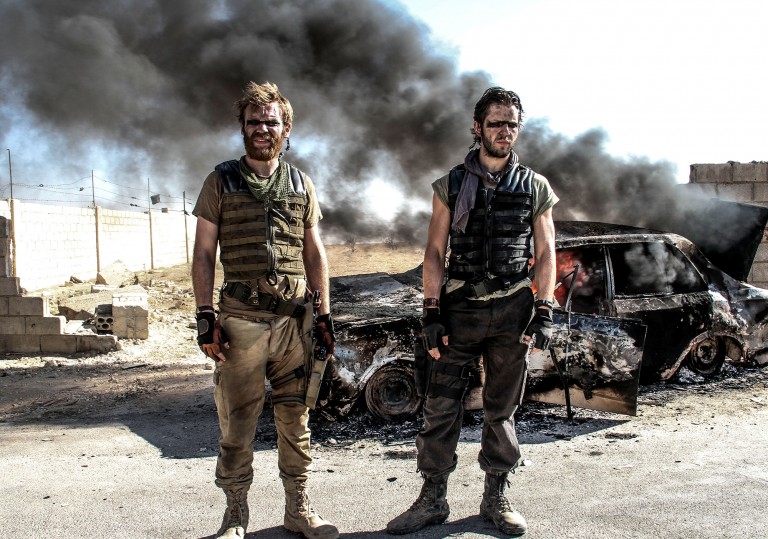 Drawn into a pseudo-psychotic world where plot lines struggle to make sense.

Simon Dixon’s mercenary drama is liberal with the bullets but fails to hit gory glory.

Brian Gleeson and Damien Molony take to the dusty plains of Iraq as bloodthirsty mercenaries on a human safari. Their loyalties are tested as secrets begin to surface: the twisted craftmanship of their invisible but ever-present superior, “Dave”. Tiger Raid, filmed mostly in real-time, serves gore, cleverly administered comedy and blink-and-you’ll-miss-it romance, all at the expense of a predictable plot.

The cinematography self-contradicts, cutting from panoramas of empty flatlands to super close-up, white noise accompanied shots of the men. This hokey cokey of visual contrasts is deliberate, mirroring the erratic minds of the film’s central rogues. Red-hued flashbacks of former lovers and point of view shots of victims expose Joe and Paddy from every ugly angle. This inner turmoil is overshadowed only by the gruesome chaos they wield when confronted with human obstacles. Muscular masculinity is valued above civility in this apathetic universe.

For his debut as both screenwriter and director, Simon Dixon delivers a cold-blooded killing spree with a fragile core. This is an honest look at the barbarism of guerrilla warfare and the psychological consequences awaiting its perpetrators. Joe, played by Gleeson, heartily performs a rough-and-ready charm act too insincere to take seriously. He is dehumanised by the savagery of his actions, obsessively dependent on others and a maniac in all senses. If the director intended to make Joe the celebrated martyr of this movie, he is unsuccessful.

The dark, comedic quirks of this film (imagine a panting Gleeson dismembering bodies in a self-made poncho) are its unquestionable highlights. Disappointingly, Dixon deflates the drama by delivering a genre-confused, cliché infested conclusion that offers redemption to its agreeably undeserving antiheroes. Its rushed, open-ended style is offensive to a plot that otherwise so patiently treads out tension. If this movie existed without an energetic, master-manipulator take by Brian Gleeson, it would be a fraction of the fun. Set in a wasteland that blooms in bloodshed, its godless inhabitants prepare for perdition from the get-go. Tiger Raid should come with a trigger warning: this is the very worst version of our world.

Drawn into a pseudo-psychotic world where plot lines struggle to make sense.