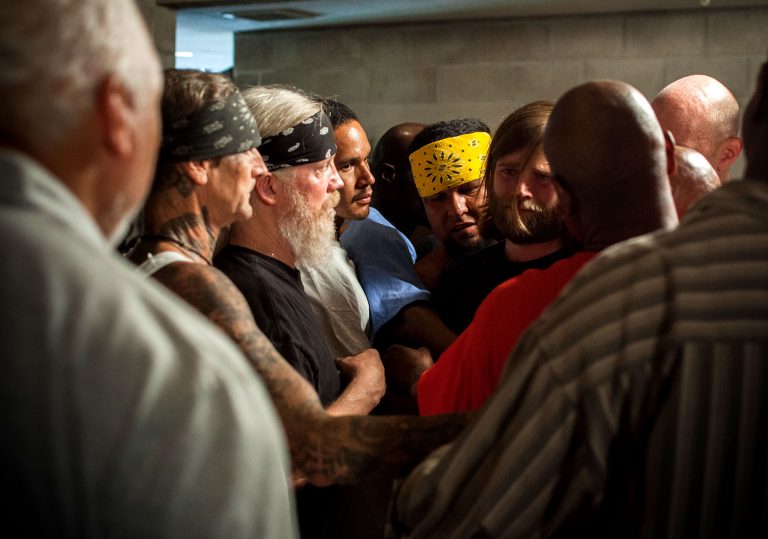 Love a good prison doc, but do we really need another one?

Holy smokes, this is unlike any we’ve seen before.

Not to sound trite, but it’s a damn privilege to watch this movie.

If four days behind the walls of New Folsom Prison piques your voyeuristic interest, then please do keep reading. The Work follows three men from ‘the outside’ as they join an intense group therapy experience with convicts, many of whom are violent offenders.

Unlike most prisploitation titles, though, this vérité gem isn’t concerned with the daily toil of life on the inside. Nor does it squeeze for details about the crimes committed by each prisoner. Rather, this is a judicious study of the slow, steady and sometimes painful process of rehabilitation. Can inner healing really occur in the cuffs of incarceration?

Almost wholly observational, The Work is intimate, engrossing and immersive – access is seemingly unfiltered. While director Jairus McLeary spent several years building relationships with men in the programme, he and co-director Gethin Aldous are all but invisible in the final product. Instead, the prisoners conduct therapy sessions and stand in for traditional interrogators. They start off by establishing the group norms, then drive conversations and embrace vulnerability. Everyone bears the collective emotional toil. And they’re astonishingly good at it.

Well, why shouldn’t they be? This film addresses and challenges pervasive stereotypes about ‘hardened criminals’. The convicts are articulate, both linguistically and emotionally. Some attend weekly group sessions and have participated in this demanding workshop before. They shepherd newbies through distressing talk of family violence, childhood trauma and racial discrimination. When a former member of the Aryan Brotherhood is more relatable than a teacher’s aid, it’s clear that the work (that is, the emotional heavy-lifting of therapy) works.

But casting judgement is not the point of the programme, nor the film. The directors’ minimal presence creates space for the viewer to move through this microcosm of masculinity, where tension is palpable and the consequences of every small nuance are shocking.

Director of photography Arturo Santamaria (together with the elusive camera team) harnesses the raw emotion of the room with compassion and respect, transporting us to the intimacy of the sharing circle, or into the thick of a sudden brawl. Two thumping heartbeats captured by lapel mics, or a primal scream from the other side of the room, are sudden indicators of the core issue here: repression. There’s still a lot of work to be done in that realm.

The notion of ‘safe spaces’ is so often cut down. The Work proves just how useful such an environment can be, especially for those addicted to the poisonous performance of hyper-masculinity. It shows truly brave men confronting gender norms that have hitherto served as interior prisons. This sometimes makes for uncomfortable or upsetting viewing, but courage and hope always sit at the forefront of every scene.

Perhaps the nicest thing about The Work is its subtle reminder that suffering is relative. While the work is a lifelong trial, this film reminds us that you always have to start somewhere.

Love a good prison doc, but do we really need another one?

Holy smokes, this is unlike any we’ve seen before.

Not to sound trite, but it’s a damn privilege to watch this movie.