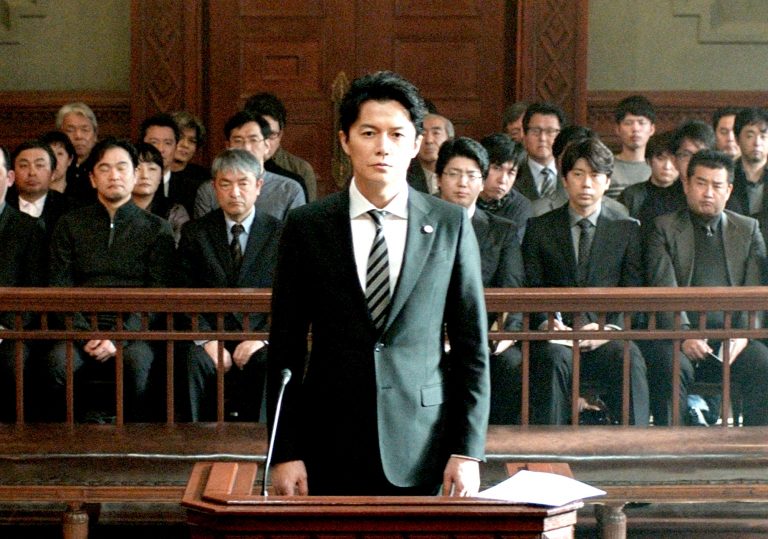 One of the world’s great directors tries his hand at a murder story.

It’s about patience rather than pleasure: this is chilly, bleak and contemplative.

There’s plenty to chew on as Koreeda picks apart ideas of morality, law and justice.

In his more recent work, writer/director Hirokazu Koreeda, the reigning genius of Japanese observational cinema, has come down with a serious case of the warm and fuzzies. In 2011’s I Wish, a pair of plucky, adorable youngsters run away from home to see the bullet train; in 2015’s Our Little Sister, three women find themselves caring for their plucky, adorable sibling.

Even his last film, the comparatively downbeat post-marital drama After the Storm, keeps the plucky, adorable child of divorce firmly in the centre of the frame. None of which is remotely intended as criticism: Koreeda deals with childhood more convincingly than any director this side of Shane Meadows, and I Wish is one of the most emotionally intelligent and intensely moving films of the past decade.

But perhaps it was time for a change. As the title implies, The Third Murder is a very different proposition, a self-conscious, rigorously controlled left-turn into a world of rough justice, amoral legality and tragic self-sacrifice. Shot in shades of china white and cloudy grey and backed by a chiming, insistent piano score, this is about as warm and fuzzy as a snapped icicle.

It begins with that eponymous homicide, as ageing ex-con Misumi (Kôji Yakusho) whacks his boss repeatedly over the head with a monkey wrench and sets fire to the corpse. His requested lawyer Shigemori (Masaharu Fukuyama, from Koreeda’s own Like Father, Like Son) turns out to be the son of the judge who put Misumi away for 30 years for the murder of two loan sharks.

But he’s determined not to let history affect his judgement, committing himself to getting a fair trial for his client. Though perhaps ‘fair’ isn’t the correct word: Shigemori is one of those lawyers who’ll do anything – including ignoring vital evidence – if he can ensure that this self-confessed three-time killer escapes the death penalty.

He sets about his work with a detective’s zeal, digging deep into Misumi’s past. But Shigemori soon learns that nothing about this case is straightforward: why was Misumi exchanging emails with his victim’s seemingly distraught wife (Yuki Saito), and why is their teenage daughter Sakei (Suzu Hirose, the title character in Our Little Sister) hanging around the crime scene? Why does the murderer keep changing his story, omitting or perhaps forgetting key details of the crime?

The result is a focused, painstaking and quietly angry autopsy of the Japanese legal system, setting up a series of ethical quandaries then picking them apart with clinical precision. Is true justice possible when both the prosecution and the defence are only in it to win? In a corrupt society, might an apparently immoral act – even murder – be morally justifiable? And are some lives just not worth living?

Not every element of Koreeda’s forensically constructed script fits together, and one twist in particular feels poorly developed and only marginally convincing. But the performances are pin-sharp – Fukuyama is especially impressive as the cynical attorney who secretly longs to believe – and the photography is subtly effective, offering striking new angles on the creaky old through-the-glass prison interview setup. The Third Murder may not send audiences out into the night with a spring in their step, but you’ll be turning it over in your head for weeks.

One of the world’s great directors tries his hand at a murder story.

It’s about patience rather than pleasure: this is chilly, bleak and contemplative.

There’s plenty to chew on as Koreeda picks apart ideas of morality, law and justice.