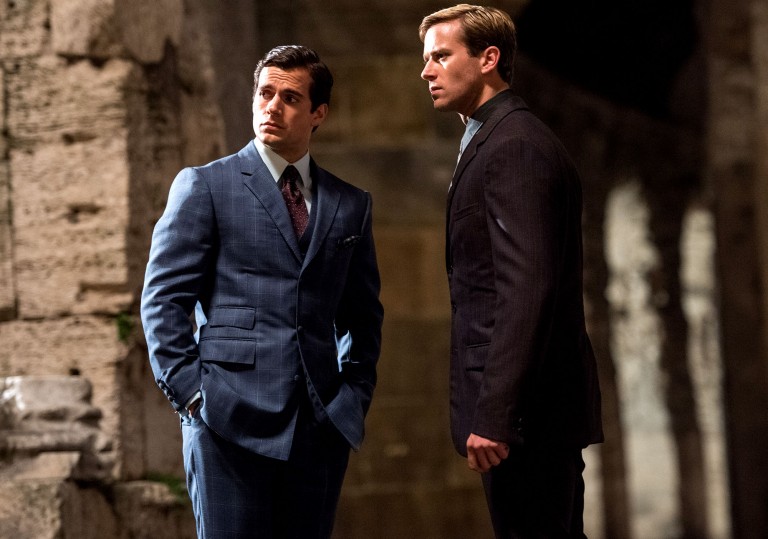 The vibe is strong with this one. The rest... not so much.

According to the press notes, The Man from U.N.C.L.E. was a television show that existed before the internet. It was about spies. Not incidentally, Guy Ritchie’s The Man from U.N.C.L.E. is also about spies. Possibly even the same spies. The year is 1963, and the Cuban Missile Crisis still lingers over world politics like a cold snap after a snow storm – or so we’re told (any sense of nuclear dread is confined to the montage of archival clips that plays behind a Roberta Flack tune during the opening credits).

The action begins in a murky green-screened hellscape that’s meant to be East Berlin, as American agent Napoleon Solo (Henry Cavill) liaises with a sparky young German mechanic named Gaby Teller (Alicia Vikander), whose missing father knows the secret to building the next great bomb. The meeting is invariably interrupted by a mountainous Russian assassin called Illya Kuryakin (Armie Hammer), who’s like Solo but with twice the muscle and half the charm. After 15 minutes of trying to kill each other during a chase sequence that’s as senselessly cut but enjoyably scored as all of the other set pieces in this movie, the rivals are made to join forces in their mission to kill a very fashionable arms dealer played by The Great Gatsby’s Elizabeth Debikci.

Like a live-action Lupin the III that so desperately wishes it could be a cartoon, Ritchie’s film is a groovy piece of jazz that’s hopelessly in search of a decent rhythm. Solo, by far the best character here, is emblematic of a movie that is all mood and no meat. Riffing on the broad-shouldered boy scout charm he brought to Superman in the wretched Man of Steel, Cavill delights in playing the super-spy that James Bond hopes to be when he grows up, but his bluster isn’t enough to overpower the dull dialogue that Ritchie and Lionel Wigram’s script forces into his mouth. Hammer, meanwhile – the Boris to Cavill’s Bullwinkle – is playing a Cold War stereotype written in sky writing.

The two men manage to generate decent combative chemistry despite never having anything clever to say to one another (the film’s idea of a joke is to have Kuryakin endlessly refer to Solo as “Cowboy”), and their contrasting styles make for a few stellar action beats – one bit, in which Solo takes a bit of a breather and watches Kuryakin handle a few henchmen, is as visually sly as anything we’ve seen this summer. Not for nothing, but the other great sequence here consists of nothing but Vikander dancing out of focus in the background; the world is rich, but Ritchie just has no idea how to foreground its pleasures.

But, in the proud tradition of le cinema du Ritchie, The Man from U.N.C.L.E. is yet another film in which its aesthetics are both its greatest virtue and its most ghastly weakness. On the one hand, Joanna Johnston’s costume design is immaculate, and Vikander wears a mod dress so well that its seems stitched from the fabric of space-time, itself. On the other hand, 60 per cent of the movie was shot on gorgeous European locations (from the Spanish Steps to the Goodwood Motor Racing Circuit in West Sussex), while the other 40 per cent of it looks like it was shot on the dank basement floor of the lair belonging to the mud demon, Baïldrokg.

It’s a good thing that the movie sounds as good as it does, Daniel Pemberton’s slinky score helping to ensure that the movie is never undone by its lack of grace. And Ritchie’s flair for music (that Tom Zé track is dropped at just the right moment) is matched by his proven gift for casting, which has been no small part of his success. Debick is an ace villainess, adding all sorts of colour to a character who exists as little more than a carrot on a stick. And Vikander, poor Vikander, is underserved by the material, but she does a brilliant job of sobering up a movie that’s high on the vapours of its own style.

The vibe is strong with this one. The rest... not so much.