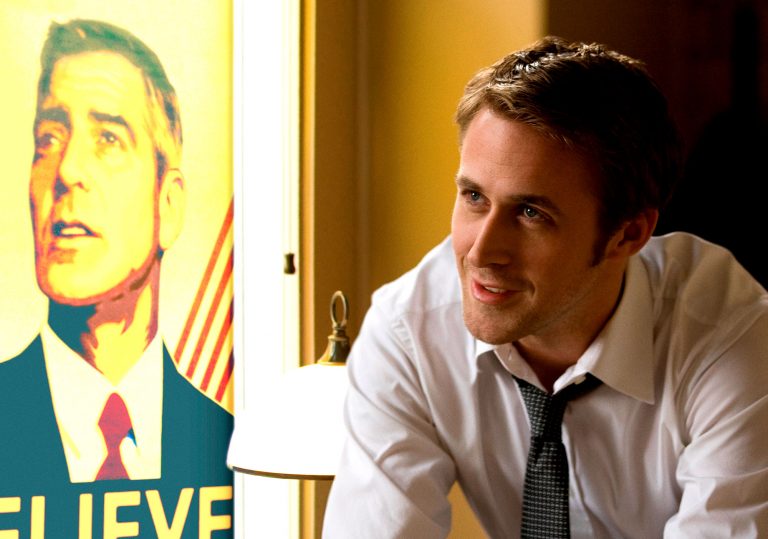 A dark drama that gleams with pure quality.

Having made just four films since being Oscar-nominated for his tremendous performance as a junkie school teacher in 2006 drama Half Nelson, Ryan Gosling is now hitting the big-screen three times inside two months. But where you get the feeling that the visceral cool of Drive and the playboy jokiness of Crazy, Stupid, Love aren’t big stretches for the 30-year-old heartthrob, The Ides of March is the real deal.

Chewing over ever-apt American themes of busted idealism, corruption, trust, betrayal and power, writer/director George Clooney’s superb political ensemble drama takes its name from the day that Julius Caesar was stabbed to death by those closest to him. Co-written with regular screenwriter Grant Heslov, it’s a big-screen adaptation of Beau Willimon’s play ‘Farragut North’, based on Willimon’s time as an aide during the failed 2004 presidential bid of US politician Howard Dean.

Back in the director’s chair for the fourth time, it’s Clooney himself who steps up as oh-so-groomed presidential wannabe Mike Morris. But Gosling’s Stephen Myers is the man behind the man: the campaign whiz kid whose super-smart spin and speech-writing will get Morris to the White House. “Nothing bad happens when you’re doing the right thing,” says Myers – fatefully, as it turns out.

This is Clooney returning to Good Night, and Good Luck’s high-risk atmosphere and absorbing immediacy – the kind of cinema where men talking in rooms becomes gripping drama. Injecting a stagy setup with agility and urgency, the vibe feels less like the Gatling gun wit of The West Wing and more like The Wire’s poisonous political subplot.

And so it goes. Myers finds his charisma fizzling out, his naivety exposed and his idealism splintered as Morris’ campaign evolves into a trench-war of wits played by older, wiser, tougher men. In a series of pressure-cooker confrontations you can’t take your eyes off, Gosling goes head-to-head against the big boys. As the senior wingman on Morris’ team, Philip Seymour Hoffman brings another frighteningly powerful performance. Up against them, Paul Giamatti’s rival campaign manager cranks down his intensity for a cunning, compulsive turn that complements Hoffman’s perfectly.

Given an intelligent script and space to flex it, Clooney’s cast keeps the drama powering forward through deeper, darker shades. As a frisky intern at the heart of the drama, Evan Rachel Wood reminds us why she’s one of Hollywood’s most interesting if underused young actresses. While Marisa Tomei’s spiky turn as a journalist makes a refreshing change from seeing her set up and laid flat for a funny-faced male co-star (see: The Wrestler, Cyrus, Crazy, Stupid, Love.).

And Gosling? It’s his best – and most interesting – performance since Half Nelson. As ideals and integrity slowly slip from his grasp, he convincingly dismantles Myers from cocksure swagger to disillusionment to hardened acceptance. The Ides of March completes a whirlwind journey from periphery player to star to serious actor. This is his year.

A dark drama that gleams with pure quality.