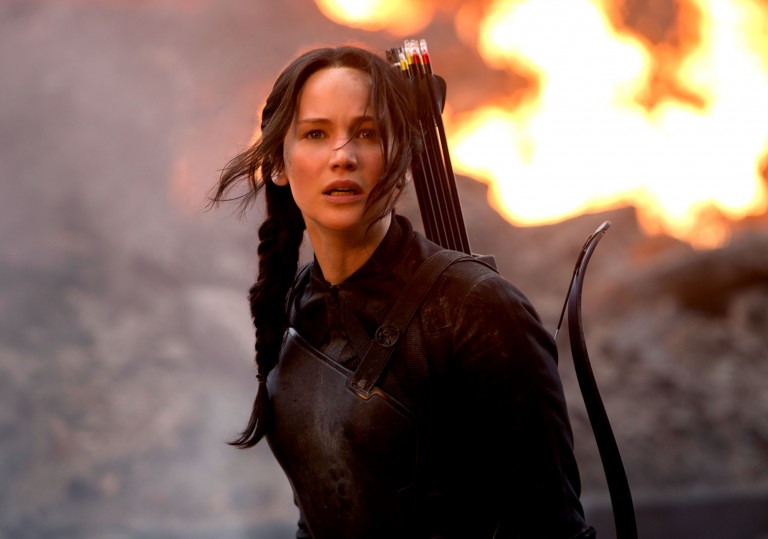 Expectations muted by the weakness of Catching Fire and this suspect business of turning trilogies into quadrilogies.

The power of emotions in filmmaking is at the heart of this beautifully constructed and self-aware blockbuster. Can't wait for Mockingjay 2.

The Hunger Games has renewed its position as the godmother of young adult movie dystopias. Mockingjay Part 1 locks you into a revolutionary fight chamber with irresistible force, but allows humanity and individualism to bubble amid the destruction while also essaying a cracking interpretation of media in modern warfare. A film with the full title of The Hunger Games: Mockingjay – Part 1 may sound too self-consciously like a franchise building block to be best in series so far. And yet it is.

Suzanne Collins’ literary trilogy which forms the basis of these adaptations is, collectively, a finely layered creation with each book enmeshed within its predecessor in terms of plot and core motivation. With this in mind, Francis Lawrence’s second film in the franchise (Gary Ross launched the games) is not the place for the uninitiated to start. With that in mind, this review will contain references to the plot of Catching Fire. If this constitutes a spoiler, this is the time to step outside – perhaps you will see a stag grazing in a forest as happens here during a rare moment of tranquility.

Katniss Everdeen (Jennifer Lawrence) – victor of the hunger games and antagonist of the mighty Capitol dictatorship – was last seen being rescued by rebels and deposited in District 13. Said to have been bombed out of existence, District 13 simply relocated underground and has been diligently preparing for revolution under the leadership of President Alma Coin. Coin – a steel haired Julianne Moore – wears boiler suits just like the rest of the troops, signifying the genuine spirit of equality. Clanking metal in cell-like bedrooms are a sensory fill-in for the missing sunlight down in the gloom. Still, subjects are free, which marks them luckier than the rebels in the other 12 districts who are executed whenever and wherever found thanks to the take-no-prisoners war policy of President Snow (Donald Sutherland).

Conflict is raging without Katniss who is trapped in a nightmare specific to her unique mix of political and personal history. Unlike her family, Peeta (fellow Tribute and dominant pinnacle of the Katniss/Peeta/Gale love triangle) was left behind and is now an establishment puppet. Katniss struggles with sleep and dreams of him.

Her publicised victories against the Capitol make her an ideal figurehead for unifying revolutionary forces hence the rebel rescue. But this traumatised teen has unsubscribed. One of the strengths hardwired into the characters in this world is the dignity afforded to all emotions. Even with Panem at war, the rawness, anguish and grief of one person is given space to exist.

And yet… “We need a lightning rod. She’s the face of the revolution. People will follow her,” murmurs Plutarch Heavensbee. With this insight, Mockingjay Part 1 revs up a sly ‘how to’ film-making dual reading. Just as the revolution needs Katniss, the moviegoing public needs Jennifer Lawrence in full heroine mode. Plutarch is played by the late, great Philip Seymour Hoffmann and the film is dedicated to his memory. Hoffman’s posthumous bow is as a low-key role as weathered and inhabited as he always played them. Considering the number of dirtbags in that back-catalogue, it’s a pleasure to see him delivering as a good guy. His Plutarch is a wordly mediator between hotheaded Katniss and cool cat Coin. He is on the side of the revolution while also being able to navigate the personalities entangled within.

A stealthy piece of manipulation jolts Katniss out of her ennui. She is taken to see her home district – now a mountain of skeletons. The camera surveys them at a pace more akin to art-house than blockbuster filmmaking all the better to channel the fire that rises up in the young heroine who decides that she will indeed be the ‘mockingjay’.

The fight this time is with cameras rather than arrows. Television director Cressida (Natalie Dormer) follows Katniss around with a crew, filming at opportune moments in order to create “propos” which will be disseminated through the wires: viral videos to the Capitol’s mainstream media dominance.

“When has Katniss genuinely moved you?” asks Haymitch (Woody Harrelson) during a hilarious power-point presentation involving a snazzy executive pen. The meeting takes place after Katniss’ disastrous attempt at performing a scripted propo in an empty studio. This nod to the art and artifice and of movie-making is a delightfully unexpected drop of referencing that reinvigorates the reality television element that made the original The Hunger Games so disquieting.

This time, however, it’s a good fight rather than bloodsports being elevated so there is scope for playfulness. The dour, dark revolutionary HQ briefly becomes a hub for filmmaking brainstorming. The answers Haymitch receives on Katniss’ moving moments hark back to encounters in the previous two films in which Katniss in a real, field situation acts for others rather than herself. With light-hearted awareness of the cinematic magic conjured by displays of solidarity, director Lawrence shows that he knows in theory how to provide emotional grace notes.

The film is in the bag when, shortly thereafter, it delivers a moment between Katniss and a boy in a hospital that somehow is the result of the pre-arranged formula and transcendent of it. The fact that we were invited to be in on the mechanics adds rather than detracts from the spectacle. There are a few soaring emotional crescendos scattered across Mockingjay that come, not within the self-contained core of lead players, but from armies of coordinated extras. Brave souls who, while being marched on by gun-wielding Capitol troopers, scatter at the revolutionary mockingjay bird call; the sombrely singing lines of men and women who burst dams in District Five.

The glorious framing of armies of anonymous labourers is at once a nod to the manpower sacrificed to war and the droves of undecorated workers who make films possible. Francis Lawrence’s invitations to unpick the components of his film are everywhere. Katniss sings in a small group. That song is subsequently spliced into a propo reminding us that canny musical cues multiply the power of an image

This layering of commentary and plot is satisfyingly cohesive but not in the slightest gimmicky. Events are played straight where necessary. Francis Lawrence keeps most of the action underground in revolutionary central or in the wreckage of bombed out districts. A rigorously dismal production design sets the tone. Gone is the gaudy, colourful circus of Capitol life. Effie Trinket is divested of her outlandish costumes yet Elizabeth Banks still provides levity via her attempts to sass up revolutionary garb. She is not alone in delivering a perfectly calibrated performance. Regardless of the size of their role, everyone plays their part with the no-frills focus required of a war situation but with a dash of moving colour that accords with the film’s defining reverence for personality.

Franchise newcomer Julianne Moore’s President Coin is austere with just a touch of weariness. Liam Hemsworth as Gale is brave but has a moment that crystallises the torture of romantic pain. Peeta (Josh Hutcherson) is largely a soulless Capitol stooge leaving it to viewers to search context for his betrayal. Donald Sutherland as the villainous President Snow is represented more frequently by white roses than in person so when he does appear with a big wolfish grin, there is the delicious knowingness of a megastar arriving for a third act cameo.

And Jennifer Lawrence? Usually brooding and quiet, she reserves her talent until – electrified by awful sights – feelings rise up and echo with something staggeringly primal. We see in Mockingjay Part 1 the depths of extreme emotion not as a lily-livered by-product of suffering to be swept under the rug, but as the rallying essence of what we are all looking for in cinema and beyond: Francis Lawrence, his actors, production team and crew have given us a blockbuster that uses all its wit and wile to fly on the wings of what makes us human.

Expectations muted by the weakness of Catching Fire and this suspect business of turning trilogies into quadrilogies.

The power of emotions in filmmaking is at the heart of this beautifully constructed and self-aware blockbuster. Can't wait for Mockingjay 2.