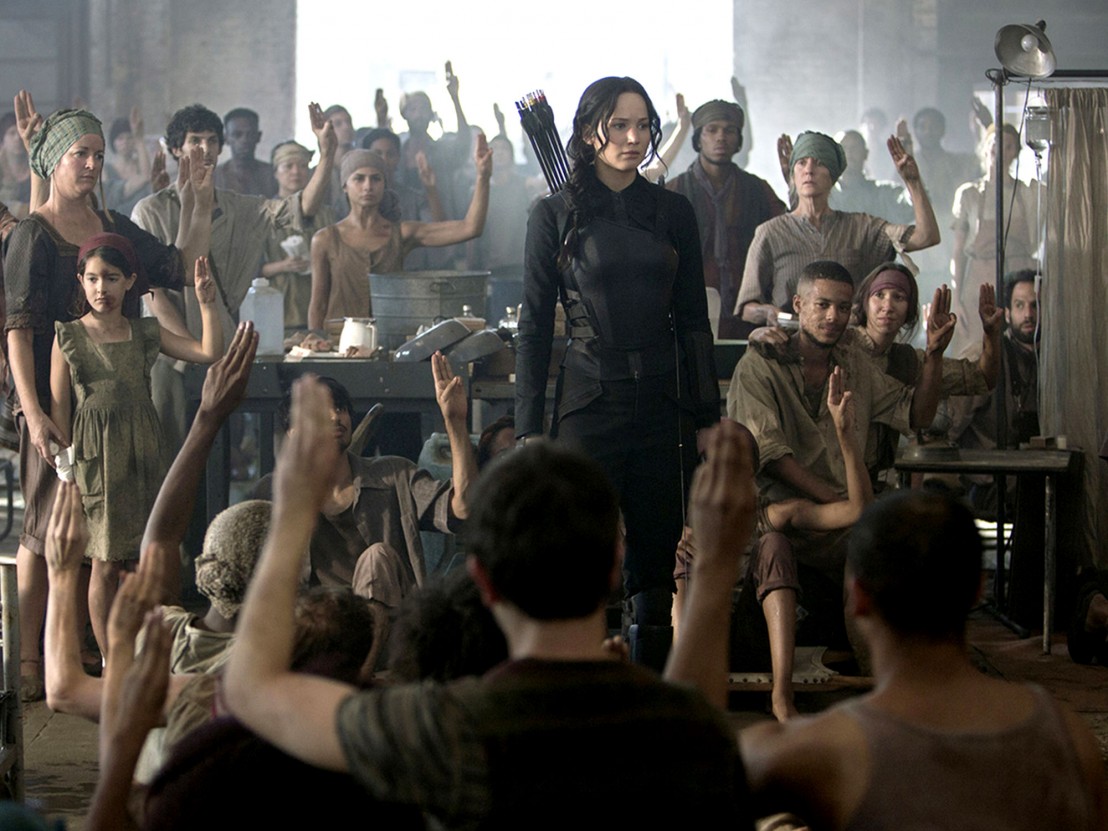 In the midst of a crowd, five figures rise. Before the shock of their presence ripples through the gathered faces, before it reaches the attention of the watching authorities, five hands thrust skywards; a three-fingered salute of defiance. Only this isn’t Panem, this is Khon Kaen Province, Thailand.

These five individuals were local university students protesting a speech delivered by General Prayuth Chan-Ocha, self-appointed prime minister and leader of the military junta that seized power last May. Swiftly seized upon and removed from the scene, the students were taken to a nearby military base, interrogated, and threatened with the charge of violating martial law. They refused to back down and, at one point in their protest, the halls of the base echoed with the Thai version of a heart-felt protest song from ‘Les Miserables’:

Do you hear the people sing?
Singing the song of angry men?
It is the music of a people
Who will not be slaves again.

These are words that become all the more potent when you read of Thailand’s history, the victim of a number of military coups throughout the past two centuries, from the Cold War to as recently as 2006. The three-fingered salute itself has grown to become a symbol of resistance across Thailand and for the protestors who mirror the franchise’s YA audience. It’s these people who have been assembling at cinemas across the country screening the latest in the franchise, Mockingjay Part 1, and raising that now iconic salute. It didn’t take long for the first cinema chain to drop the film from its schedule “for fear of political implications”, not much longer than that for the first arrests to occur.

In a country in which protests and political gatherings have been made illegal, it’s not altogether surprising to see a desire to politicise the act of cinema itself. There’s a defiant subversiveness in turning an innocuous product of the Hollywood machine into an act of protest, and to throw open the doors and show the rest of the world the lunacy of a government which would find parallel and a sense of threat in a film in which children are sent to murder each other for a television audience. And perhaps, most importantly, it’s the age of these protestors that have seen them turn to Katniss Everdeen as a politicised fictional leader; these are the same people that in another corner of the world would instead have the luxury to argue over Gale vs Peeta for hours on end.

It’s easy to dismiss The Hunger Games franchise as the cynical product of an industry that trades on teenage angst, but we’d question any cinephile who isn’t deeply moved by this example of cinema inspiring action. These students look to Katniss and see their future placed in their own hands. It would be a stretch to imply that this movie has directly led to an act of political protest, but Katniss has provided a figure of reassurance and hope that action can inspire positive change. And cinema has given them the language to express the rage that has taken over their hearts.

This isn’t the first time in recent history that a protest group have taken on a fictional leader to guide their ranks; we need only think of Anonymous and their supporters, the sea of Guy Fawkes masks marching through the streets. Originating from Alan Moore’s graphic novel ‘V for Vendetta’, yet made famous through the 2006 film adaptation, these masks have grown in popularity to become a central symbol of modern rebellion. In 2011, The Guardian was quoting a sale of over 100,000 masks a year, which led to questions over whether the mask had now indeed overtaken Alberto Korda’s photograph of Che Guevara as the height of revolutionary iconography.

Yes, someone will always be quick to point out the fallacies behind this mask, which remains a licensed image of Time Warner and thus a source of towering profit for the company; the masks themselves a product of mass production factories in either Mexico or China. Nor is it hard to argue that V for Vendettawas anything much more than a cynical cash-grab placed at the dawn of the superhero mega-franchise; these people changed V’s backstory to include super-human abilities gained from the injection of experimental chemicals. That’s not even mentioning the problematic undercurrent in the heroic representation of terrorism, regardless of whether it remains a justified response to the reign of terror enacted in this dystopian future.

The real, resonating core of this movie arguably all lies in this single line: “people should not be afraid of their governments. Governments should be afraid of their people.” Like Katniss, V became a rallying cry for those who wanted to take back the reins of change, specifically here by the force of one collective unit. The masks have their own practical use, initially embraced as they were by Anonymous when they staged their first public demonstration against the Church of Scientology. In a probable combination of wanting to maintain the anonymity and freedom of the internet, and the fact Scientologists are the last people you want to make yourself known to, the code of conduct which circulated before the demonstration clearly stated members should cover their face.

Yet the masks soon gained their own symbolic significance: in the film’s closing moments, Evey Hammond (Natalie Portman)’s words that V “was all of us”, speak to the masked crowd as a collective force of power. As individuals we may feel too weak to bring about change, but empowerment comes from a freedom from the individual body and voices which mingle into a single roar.

The issue becomes a little more complicated when you realise that Katniss Everdeen has been co-opted as much by the politically right-learning as it has been by the left; a heralded figurehead of American Tea Party politics on the hunt for younger voters, where a Hunger Games-themed youth event and similar short film has instead painted Everdeen and her cohorts as rebels fighting against government hand-outs because… eradicating poverty… is bad…?

If we’re looking for co-opted interpretation that really represents the antithesis of our own assumptions, there’s nothing quite as antithetical as John Hinckley Jr’s attempted assassination of Ronald Reagan in 1981. It’s difficult to infuse Hinckley Jr’s actions with political significance, as the courts deemed it an act of insanity driven by an erotomanic fixation with a public figure; yet there is an interesting parallel to be drawn between this extreme action and its cinematic inspiration.

Much of the attention surrounding the Hinckley Jr case focused on his obsession with Jodie Foster, which saw him move to New Haven, Connecticut just so he could post love letters under her door while she studied at Yale University. Later he developed schemes to get her attention, from hijacking an aircraft to committing suicide in her presence, yet it seems beyond simple coincidence that the method he settled on, the assassination of the president, so closely mirrored Travis Bickle’s own intentions in Martin Scorsese’s Taxi Driver. Was this really a straightforward case of erotomania? Or was this a man who became consumed by a fictional character manipulated by madness to reflect his own hatred of the world?

Just look at the interviews Foster gave the police after Hinckley Jr’s arrest, in which she reveals a few of the letters she received: “It’s all for you, Foster” and “Jodie Foster, love, just wait. I will rescue you very soon. Please cooperate.” When asked whether they seemed familiar to the actress, she replies: “In the movie Taxi Driver the character Travis Bickle sends the character Iris a rescue letter.” The trial indeed revealed Hinckley had slowly been moulding himself in the image of this disturbed, fictional loner: in his clothing, his drink choice (peach brandy), and in his growing collection of firearms.

The point is, Hinckley Jr missed the deep and pervasive irony that anchors Bickle’s last reel redemption; yet, as extreme an example as it may be, it speaks to a wider notion on how we consume and interpret cinema. We, as individuals, all live in desperate search for self-identification, to bridge the gap between our own internal struggles and a seemingly indifferent world: sometimes cinema becomes that key. Since in reality we’re far too complex and contradictory to understand ourselves by our own means, we can mould both cinema and our own self-perceptions to create a single coherent statement to present to the world and, most importantly, to our own deeply confused selves.

That’s one way of explaining how Hinckley Jr might have been blind to Bickle’s hypocrisy, or how Katniss Everdeen can simultaneously be a hero to both protesting students and Tea Party leaders alike. However right or wrong our own interpretations might be, we seek in cinema a kind of reassurance for own existence: to know we’re not lost in this world; we know our path and we know our place in the grand scheme of things. And so we shout:

I am a survivor. I am Scarlett O’Hara.
I am a fighter. I am Rocky Balboa.
I am a rebel. I am Katniss Everdeen. 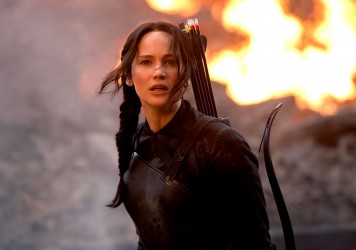