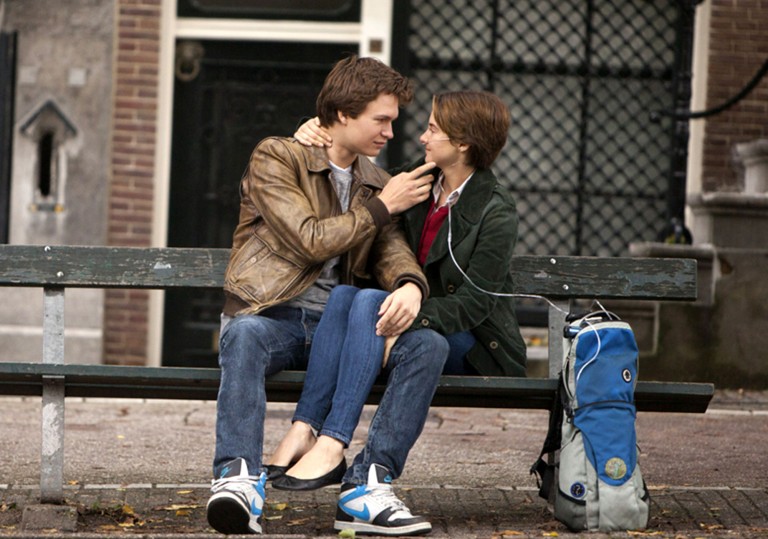 Under eighteen? Your favourite novel finally hits the big screen.

Resistance is futile. Expect this to go stellar.

Try as you might, there’s not a single damn thing you can do about The Fault in Our Stars. It’s here. It exists. Suck up the saccharine, let it into your heart, and deal with it.

Adapted from the best-selling novel by YouTube impresario John Green (one of the 100 most influential people in the world, according to Time magazine), the film is no small-scale weepie; it’s an unrepentant emotional Armageddon. All in the best possible taste, of course, with plenty of humour and an unlikely aside of transatlantic travel to punctuate the tragedy. It’s basically Love Story for the Katniss Everdeen set; the kind of cultural anomaly that shimmies its way into orbit while the adult world snoozes at ground level. Don’t just take a tissue, bring the box. And perhaps invest in shares.

Augustus is the kind of guy who only exists in novels and movies. He’s a hip, handsome, older ex-jock who carries cigarettes with him everywhere, but never actually smokes them. Also, he’s called Augustus, for crying out loud. And he wears a leather jacket. So what if he’s only got one leg? He’s basically the coolest person ever. Anyway, Augustus and Hazel fall hopelessly in love, sparking off an intense and ultimately doomed love affair.

The film opened to absurd numbers in the US, keeping even the new Tom Cruise behemoth off the top of the box office chart. Frankly, it deserves every last cent. This savvy, dewy-eyed parable proves that the trick to getting young people back into the multiplex isn’t to give them something they’ll like; you need to give them something they’ll love. And there’s a lot to love about The Fault in Our Stars.

This is only director Josh Boone’s second feature, but he handles the earnest, potentially soapy material (think a genetic mash-up of John Hughes and Nicholas Sparks) with sturdy hands. Visually, his film resides somewhere in-between soft focus, Disney Channel melodrama, and the rougher dimensions of a Catherine Hardwicke movie, but it works.

Boone clearly lucked out with his cast, too. The picture is elevated above the level of crude, adolescent hokum by the central partnership of Woodley and Elgort, both of whom are completely believable (if a little too pretty) as the tragic twosome. Elgort, in particular, captures the beats and rhythms of the seemingly invulnerable Augustus with verve and swagger. A heartthrob is born.

The cast is ably supported by a sparky, quick-witted screenplay by Scott Neustadter and Michael H Weber, the guys behind (500)Days of Summer. Their script is full to the brim with punchy one-liners and memorable gags (check out token best friend Nat Wolff, for instance, and his increasingly violent attempts at anger management). Weirdly, the characters all converse in a stylised, quasi-literary, Dawson’s Creek lingo; modern teenagers envisaged by dudes in their late thirties.

Yes, it can be a little mawkish, and there are moments scattered throughout the film that accelerate the sentiment to such an extent that it threatens to go cosmic. Sometimes the plot veers into outright wish fulfilment (quite literally, during the Amsterdam sequences). The problem is that everything’s just so damn adorable, especially as the narrative, like the lives it reflects, reaches a poignant, and heartbreaking crescendo. That’s the moment when The Fault in Our Stars really connects, when you realise that this isn’t just for kids. This is for everyone.

Under eighteen? Your favourite novel finally hits the big screen.

Resistance is futile. Expect this to go stellar.