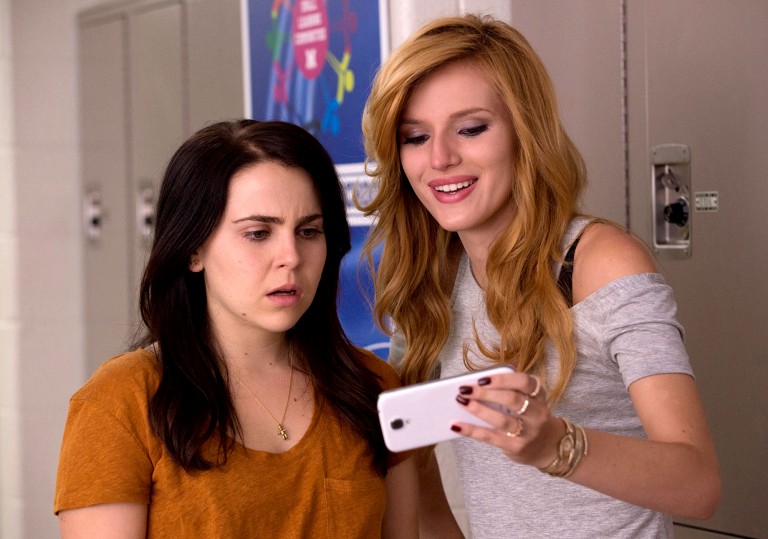 Did gangbusters at the US box office.

Return visit more of an idle pleasure than a necessity.

This Rolls Royce teen high-school movie is powered by a sparkling comic turn from Mae Whitman.

Just fyi, we are allowed to say “Mae Whitman FTW” in this review even though it’s not really a term you can actually pronounce, but it’s in the spirit of this delectable teen comedy about how digital culture has irrevocably altered the experience of high school. Whitman is golden as Bianca, a DUFF (that’s Designated Ugly Fat Friend) who lopes around with two prettier girls who aren’t given many funny lines and is the easy entry point for boys wanting to penetrate the clique. You can tell she’s a duff because she spends her days wearing scraggy novelty tees, untied Kicker boots and watching horror movies on TV.

Whitman’s immaculate comic timing and total ease in front of the camera (it never once feels like she’s acting) recalls an on-form Claudette Colbert, the romantic foil, played by Robbie Amell, standing in as her Clarke Gable. And it’s not just the delivery of lines, it’s the all-in self-effacing and the fact that her presence actually raises the game of whoever she’s working with on screen at the time. Ace side players Ken Jeong and Allison Janney even lend The Duff some major spin-off potential.

The film charts Bianca’s belated acknowledgment of her own duff status, trading tutor time with Amell’s sexed-up quarterback type Wesley for lessons in how she can transcend her duffdom and realising that he’s perhaps less of a dopey jagoff than she’d initially suspected. Sweep aside the Life Lessons which, admittedly, don’t quite add up, the prom-based finale settling for a bet-hedging jumble which, while not perhaps not allowing discerning teens to feel militantly empowered about their body image or any sexual hang-ups, does come across as authentic ode to lets-hash-the-details-out-later teen romance.

The limited strictures of the teen high-school comedy does mean that, even when you’ve manage to pull together a very high calibre group of comic performers, there’s only a number of routes you can really take through the story. But screenwriter Josh A Cagan, adapting the YA novel by Kody Keplinger, manages to turn these cons into pros by subtly acknowledging the potential tawdriness of this template, while taking it seriously enough for the plot and characters to retain a sense of real world credibility. Even its playful, extemporised version of social media suggests it’s a movie that really doesn’t want to come across as a braying blowhard that takes itself too seriously.

Did gangbusters at the US box office.

Return visit more of an idle pleasure than a necessity.