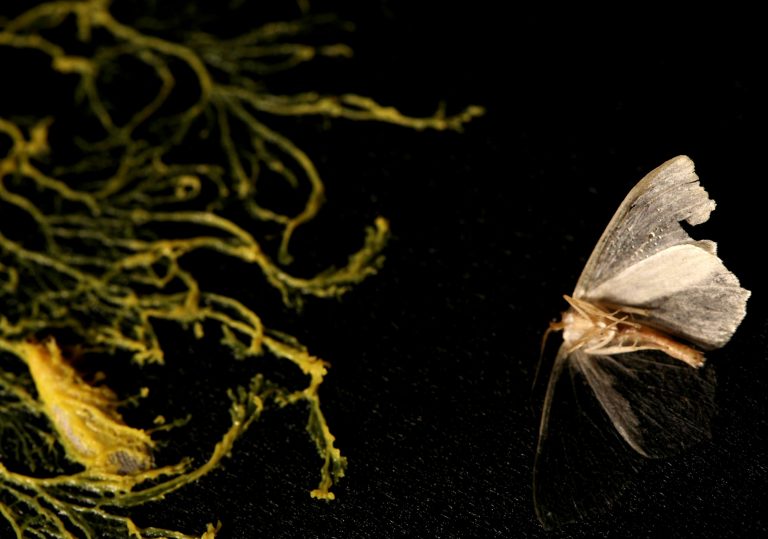 With a premise that sounds this bad, it must be good – right?

Truly cast in its own mould.

Sticks in the mind for longer than expected.

Conventional documentaries tend to train their gaze on human life, but The Creeping Garden slides a smaller-scale subject into the limelight: slime mould. These seemingly otherworldly organisms evoke the alien amoeba of ’50s horror staple The Blob, both in their appearance and their tendency to engulf and absorb food. They can move – albeit very slowly – and are even able to form efficient networks, often likened to transport routes.

One amateur mycologist suggests in passing that slime moulds may be extra-terrestrial in origin, an association that directors Tim Grabham and Jasper Sharp keenly exploit. The opening scene of their film features a grainy NBC newscast that reports the discovery of mysterious, quivering masses in Texan backyards as if it were a close encounter. “Now we go from science to what sounds like science-fiction,” the anchorman announces.

This alleged unearthliness is complemented by the film’s stylised sci-fi quirks, from a retro-futuristic typeface to the deliberate distorting of video footage. At times, the genre conceits can jar comically with the action onscreen – in one instance, a forager cheerily talks about observing rotten vegetation while accompanied by the ominous electronic strains of Jim O’Rourke’s score. For the most part, though, the approach works well.

Though the slime moulds are the unquestionable stars of the show, a roster of interviewees is on hand to provide supporting roles. The latter half of the documentary focuses on biotech experts, while the first segment foregrounds amateurs and artists who have played a lower-key, yet no less vital, part in collecting, examining and repurposing samples.

One of the individuals recalled is Percy Smith, a “citizen scientist” who created experimental nature films in the early 20th century. Smith’s love of time lapse techniques – or “time magnification” – seems to be a primary influence on the documentary’s visually striking series of microscopic shots. Despite the evidently esoteric subject matter, Grabham and Sharp provide enough stimuli to guide us from cynicism to curiosity – perhaps even captivation.

The sight of slime moulds driving robots, generating music and re-enacting the division of Germany certainly makes for novel viewing. These blobs may not devour and dissolve human prey but, it seems, they have plenty of other talents.

With a premise that sounds this bad, it must be good – right?

Truly cast in its own mould.

Sticks in the mind for longer than expected.