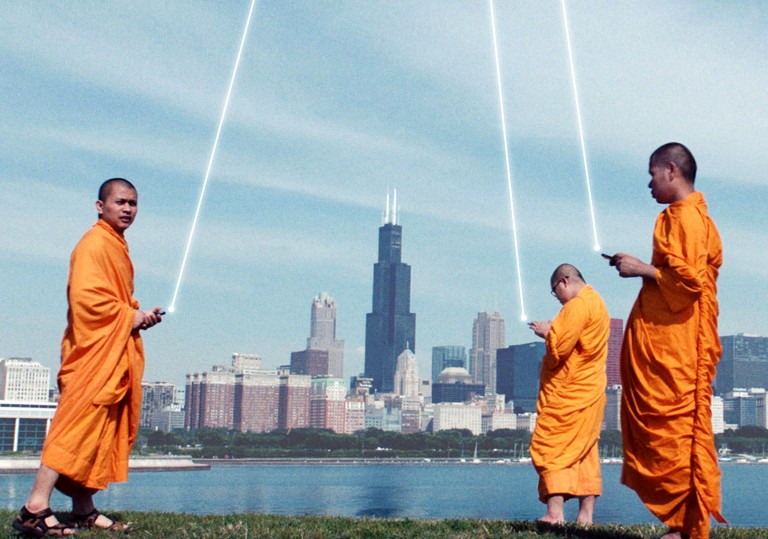 Please nail the internet for us, Werner.

A phantasmagoric super-highway of information.

More interpretation and less information would have led to a more lingering legacy.

If the internet were to be formally recreated as a film, it might resemble Werner Herzog’s 10-chaptered spidery infoverse of a movie. Whether information presented artlessly on its own terms makes for a commendable viewing experience is all a matter of taste. Nothing narrated in the endearing deadpan of Werner Herzog could ever be dry. His curiosities regarding the riddles of the connected world are articulated with piercing intelligence and an impish relish for the absurd. Listening to his interpretation of our time’s greatest unknown known intoxicates and breeds an appetite for a more personal perspective that never fully comes into being.

For Herzog’s comments – expressed in narration and questions – are just the joining stitches. The bulk of the material is interviews regarding all frontiers of the internet. Herzog plays intellectual explorer, notching up points of view like a kid in a cerebral candy store. The subjects are fascinating, yet their words sometimes come with an artificial sense of wonder. The structure of Lo and Behold… begins and ends with the decision to create 10 chapters. There is limited support to uphold the teeming mass of individual intelligences. The result is a litany of standalone pleasures and stimulants. Herzog’s focus begins with the birth of the internet at UCLA in 1969, when everyone online was listed in a slender directory.

It ends by speculating as to what the future holds, and how society would cope if everything just shut down. He explores the dark side of the net, interviewing those in rehab for internet addiction, as well as a family scarred by the inhumanity of anonymous trolls. There is a visit to Green Bank, a disconnected safe haven (evocative of Todd Haynes’ 1995 film Safe) for people whose bodies are made sick by the cellular signals and radio waves. Herzog’s superpower is his ability to extract far-reaching soundbites from subjects, emerging with the heart of stories sufficiently complex and strange to fill their own feature films.

Normal people made extraordinary by their experiences are mixed in with specialists. Space-magnate Elon Musk, counter-cyber-espionage operative Shawn Carpenter, and one of the world’s most infamous hackers, Kevin Mitnick, are among the countless individuals contributing to this thick gumbo of anecdotes, opinions and information. The density of the content suggests the benefit of repeat visits. And yet…

Even after two viewings, it’s too much. The first time, the focus remained on reverently trying to hoover up each burst of information, taking Werner’s humorous tidbits as a source of uproarious glee. By the second viewing, it feels like this film has sacrificed depth for breath, and arcs for parts. What initially seems like an over owing cup to be returned to and drunk from repeatedly, feels more like widely spaced-out thimbles of water – refreshing initially but not substantial enough to quench thirst for a satisfying narrative about the connected world.

Please nail the internet for us, Werner.

A phantasmagoric super-highway of information.

More interpretation and less information would have led to a more lingering legacy.