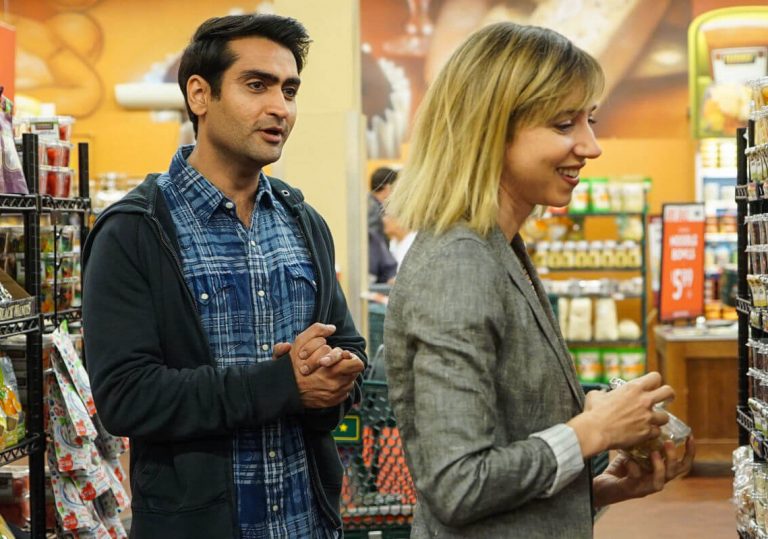 A Judd Apatow production for a previously unheralded talent.

Smart performances jolly us towards a well-earned happy ending.

Not quite life-or-death viewing, but as good a star vehicle as Nanjiani might have wished for.

You’ll likely recognise Kumail Nanjiani’s face, if not his name: with credits on everything from Sex Tape to Broad City, the heavy-browed, Karachi-born supporting player has become increasingly prominent among that repertory of oddballs lending added value to the decade’s comedic endeavours.

The Big Sick – directed by Michael Showalter, and produced by 21st century mogul of mirth Judd Apatow – feels like the kind of project designed to introduce a wider audience to a performer beloved among their peers but only fleetingly glimpsed elsewhere: a multiplex-ready rom-com, co-authored by Nanjiani with wife Emily Gordon, and based on the pair’s unconventional courtship.

Apatow’s influence is immediately felt: a comedy-circuit milieu (here Chicago, succeeding Funny People’s LA) is evoked in loose, relaxed, at least semi-improvised scenes, feeding into a generous two-hour running time. Settle in, though, and matters get a shade more culturally specific – a refinement of the disastrous fringe show the film’s Kumail conceives by way of explaining his Pakistani heritage to crowds of watch-checking WASPs.

His material? Religion (a non-practising Muslim, he spends prayer time turned towards YouTube), cricket fielding positions and arranged marriages, the latter providing a real-life stumbling block once he falls for white girl Emily (Zoe Kazan). For a while, this romance proceeds according to the template of Apatow’s Netflix creation Love. Showalter’s lovers meet very cute (she’s a heckler), then begin to work through yet more of modern dating’s myriad complications.

Emily’s whiteness, however, isn’t the real issue here; it’s her growing pallor. Kazan pays Gordon the compliment of playing movie Emily as an evasively independent, flesh-and-blood woman, not just a stooge recruited to laugh at her co-star’s jokes – and the unusually heightened stakes underpinning this relationship are revealed after she’s rushed to hospital with a rare, life-threatening disease.

Thereafter, the film reconfigures itself into a waiting game, during which Nanjiani – to his credit – keeps testing himself as writer and actor: Kumail withholds his true feelings from his traditionalist parents (Bollywood veterans Anupam Kher and Zenobia Shroff) while pleading his case, in the ICU ward, before the wholly cherishable pairing of Holly Hunter and Ray Romano as Emily’s folks. What begins as merely another romance morphs into an inversion of arranged marriage: our young swain is confronted by his beloved’s parents before he’s had chance to connect with their o spring, and as awkwardness cedes to mutual affection, he proves himself a worthy suitor.

You’d still call it a decent rather than mould-breaking film, hamstrung by the cosiness that follows from knowing Emily will survive to claim her co-writer credit; the second hour, indeed, has so much narrative to resolve that it often forgets to be funny. Nevertheless, the sweetness radiating outwards from Nanjiani sustains it, and whenever The Big Sick digs a substratum or two deeper than the rom-com norm, that spitballing Apatow house style starts to resemble something like profundity: an analogue for the ways in which most of us muddle through this changeable world, trying to make light of life’s trickier moments, hopeful everything will turn out for the best.

A Judd Apatow production for a previously unheralded talent.

Smart performances jolly us towards a well-earned happy ending.

Not quite life-or-death viewing, but as good a star vehicle as Nanjiani might have wished for.