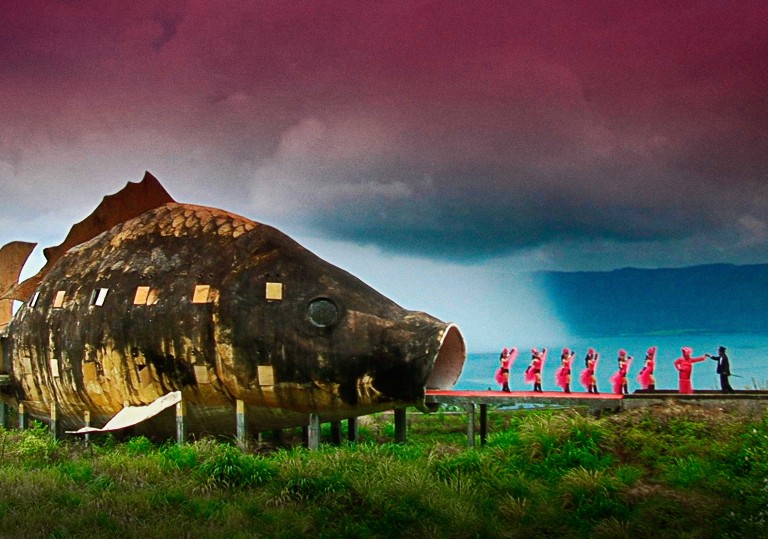 The festival buzz from this one has been positively deafening.

Provocative isn't the word – The Act Of Killing is a Brechtian, socio-political marvel unlike anything else out there.

Where to begin? Let’s first attempt to untangle that title. The “killing” element is literal, being as this is a documentary (of a sort) examining the mass, state-sanctioned extermination of communist sympathisers in Indonesia circa 1965 following a successful military coup let by Suharto.

Joshua Oppenheimer’s extraordinary, at times improbable film glances at a history that’s been refracted in a convex mirror, looking hard at the fine details of the present in order to tease out the gross infelicities of the past. It’s a film which rejects traditional context and direct discourse in order to re-frame and recontextualise horrendous acts of violence, looking less at the cruel sweep of history than the psychological impulses pertaining to the universal human action of inflicting pain on another.

The title offers a sly double entendre: it is about a finite act of killing, one that occurred on a massive scale and in days where dangerous political volatility deemed it necessary for the continuation of society. In this case it was an act that was concealed through brutality and paranoia. The fearful denizens of Indonesia were unable to publicly air their grievances, nor were they able to seek their retribution. It’s a textbook cover-up, a case of deep-set national shame which director Oppenheimer would’ve been unable (or, considering some of the violent characters he meets, ill-advised) to explore as a piece of straight investigative journalism.

His masterstroke is – in the most empathetic and open way imaginable – to hand his subjects enough rope with which to hang themselves. And that they do, in spectacularly strange fashion. At the centre of the film is a suave silver fox, an ex-militia man and executioner named Anwar Congo who gladly accepts Oppenheimer’s invitation to create a close personal document of the process of his killings.

Initially he merely outlines the DIY particulars of decapitating someone quickly and cleanly with a length of wire attached to a wall. But later, the articulation of his “crimes” (scare quotes not suggesting that what Congo did was disputed, more that it was and remains entirely legal) takes on a different form.

This is where the “act” bit of the title comes in, as we are seeing in the most literal sense an acted out version of past killings, restaged and romanticised with the cheery collusion of Congo and his cronies in order to get to the heart of how these men were able to carry out the things they did.

There’s clearly a divide between what Oppenheimer and Congo think they are making. The director perhaps sees it as a meta-cinematic treatise that’s been fortuitously flooded with grim irony, while the subject perhaps sees it as a rhinestone-studded highway to vindication, believing that to speak freely of his formative years would be to wrest the burden of guilt from himself.

This ideological push and pull at the film’s core supplies it with a sense of high drama. How far can Oppenheimer indulge the whims of his subject to further calcify his demonic inner-nature? How far can Congo indulge the whims of his director in order to appear more humane and misguided in the eyes of the audience? Such is its brilliantly slippery nature, you’d even be forgiven for thinking that the entire film is a huge situationist prank and that Congo and Oppenheimer are merely fictional characters.

Yet as much as The Act Of Killing is a film with serious and earnest documentary intent, it also works on a startling and profound duel level. Congo reveals that prior to his killing spree he had been quite the cinephile, hoovering up the American films screened at his local fleapit. His recreations are coloured by his love and knowledge of cinema, as in one scene he’s dressed as a suave, wise-cracking gangster in a cream suit while he carries out a bout of torture.

The scene recalls early gangster pictures like The Roaring Twenties or Howard Hawks’ Scarface, intimating that Congo’s memory has somewhere down the line been irrevocably fused with that of the glamourised ideal presented in cinema. Some say that cinema offers a literal representation of dreams and memories, and this film, in its own utterly bizarre and singular way, backs up that claim.

The Act Of Killing suggests that cinema can offer nothing but lies, whether that’s due to the unchecked egos of its makers, or the logistical impossibility of recreating a moment that only exists as a subjective memory. It’s on those terms that this film should be consumed, and it’s Oppenheimer’s consummate balance of tone that makes these “lies” appear so horribly beguiling.

The festival buzz from this one has been positively deafening.

Provocative isn't the word – The Act Of Killing is a Brechtian, socio-political marvel unlike anything else out there.