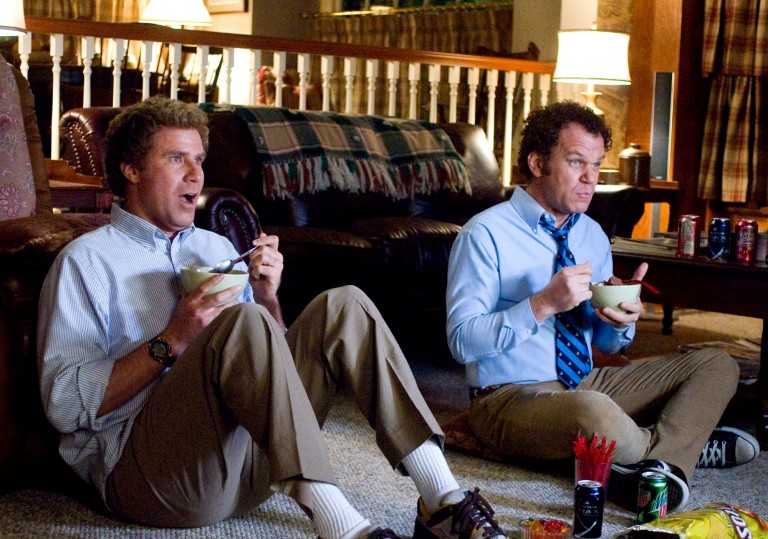 Forget the maths. If you’re a fan of what these guys do, you’ll laugh – but the gag is wearing perilously thin.

Men behaving like children has been a comedic staple in the work of both Will Ferrell and Judd Apatow. Think of Ferrell’s streaking frat boy in Old School or the stoner geeks in Apatow’s Knocked Up. It makes sense, then, that the star and producer of Step Brothers has made the most literal movie about arrested development yet.

The plot sees Brennan (Ferrell) and Dale (John C Reilly) as two middle-aged men who, for reasons that are never fully explained, still live with and depend upon their single parents. When Dale’s retirement-age father and Brennan’s well-preserved mother (veteran character actor Richard Jenkins and Mary Steenburgen, aka Mrs Ted Danson, respectively) decide to get married, the two are forced to live together.

And that’s the gag. And no matter how many times Ferrell rubs his testicles on Reilly’s drumkit, or Reilly hits Ferrell with a bicycle, it’s still essentially the same joke that Harry Enfield came up with for Kevin the Teenager all those years ago: men acting like children, repeated ad nauseam. That said, this is no Kevin & Perry Go Large. Ferrell and Reilly are talented comedians, and their surreal improvised insults and well-timed slapstick keep the laughs coming.

Still, it’s hard not to feel as if Ferrell and co are phoning it in. After Anchorman and Talladega Nights, this noisy, nonsensical comedy is just more of the same. Watching yet another ironically choreographed fight scene, or Reilly marching about in his Y-fronts, it strikes you that it’s not just Ferrell and Apatow’s characters that are suffering from arrested development.

Forget the maths. If you’re a fan of what these guys do, you’ll laugh – but the gag is wearing perilously thin.