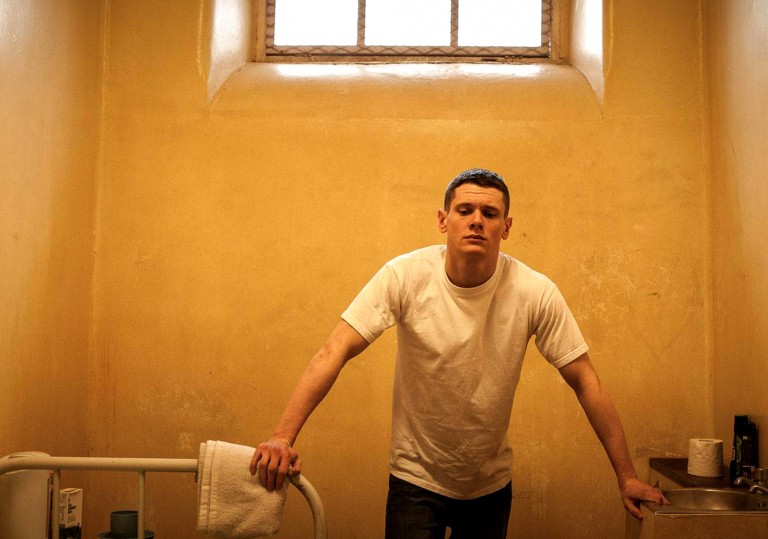 Jack O’Connell. Get it. Got it. Good.

Shot in a disused correctional facility in Belfast and scripted by former prison worker Jonathan Asser, Starred Up is director David Mackenzie’s authentically tough look at the penal system through the eyes of 19-year-old young offender Eric Love (Jack O’Connell), whose file has been marked on account of his excessively violent behaviour.

We first meet Eric during processing at the maximum-security unit to which he’s been transferred for an indeterminate stint. As he’s clinically strip searched, put into uniform and escorted through long, cold corridors and up an exposed steel stairwell to his single cell, Eric is noticeably accepting of his new surroundings. But his placidity doesn’t last long. In the next scene he strips off, douses himself in baby oil and gaffer-tapes a splintered chair leg to each hand, abusively goading the three officers who are about to blitz his cell in full riot gear for his (or is it their?) protection.

Eric’s relentlessly combative disposition and substantial emotional scarring make him a high-risk inmate and the ideal subject for an experimental group therapy session run by well-intended but way-out-of-his-depth volunteer Oliver (Rupert Friend). Initially resistant to Oliver’s irregular methods, Eric is starting to show signs of reform when the root of his explosive self-destructiveness rears its ugly head in the form of fellow con Neville (Ben Mendelsohn), who also happens to be Eric’s old man.

If O’Connell is like a caged wild animal, Mendelsohn is the ineffectual circus trainer whose strict commands and stern lashes don’t so much tame the beast as enrage it further. While the film boasts strong performances all round, it’s this volatile central dynamic that proves the most potent. Mendelsohn is in menacing form here, but the largely unreciprocated affection he displays towards his son gives him a vulnerability that is duly exploited by those higher up the food chain.

Neville may be desperate for Eric to avoid making the same mistakes he did, but when the clink’s top dog (Peter Ferdinando) tells Eric, “‘Starred up’ means you’re a leader,” we’re left with the gut-wrenching feeling that his fate has already been sealed: that he is destined to one day reach the top before in turn being overthrown. For all the advice and counselling he has been given and is yet to receive, Eric is an irreparably damaged and acutely dangerous individual for whom help has seemingly arrived too late.

The film’s most powerful home truth is this: as long as Eric allows his violent outbursts to define him, this is where he belongs. Look back at that opening scene – it’s Eric’s familiarity with the processing procedure, not his perceived indifference towards it, that makes this short and unsettling chapter in his story so affecting.

O’Connell’s electrifying physicality makes this an exciting and unpredictable portrait of prison life. But there can be no argument that incarceration is in any way glorified here. Starred Up is a bruising, unsentimental work that brilliantly contextualises the grim reality facing scores of young criminals entering prison today. Unlike the suffocating prison walls in which the drama unfolds, however, this is a film you’ll want to revisit.

Jack O’Connell. Get it. Got it. Good. 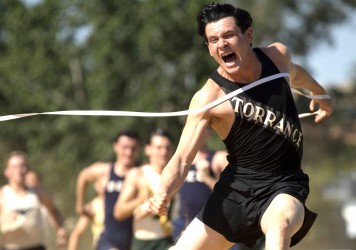 Angelina Jolie takes to the director’s chair and is overwhelmed by her deity-like subject in this glossy, unexceptional awards-baiter.