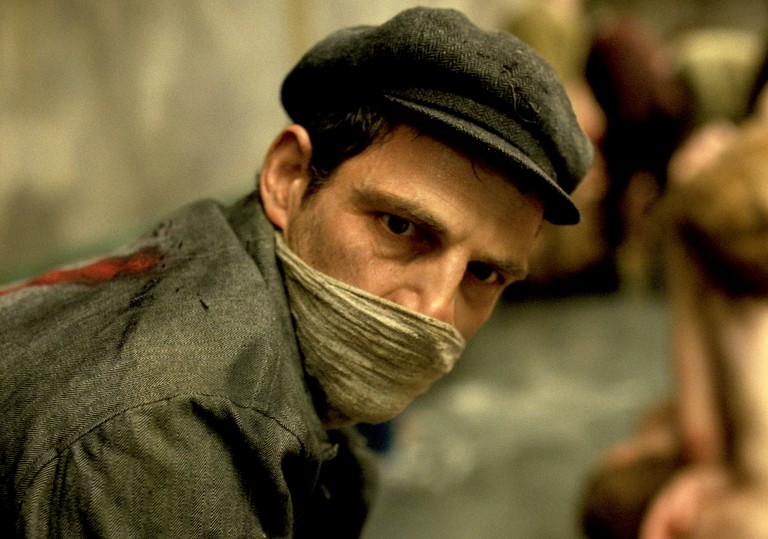 The Palme d’Or winner that should have been.

It’s calculated to stun and, on those terms, it’s ruthlessly effective.

The brute force is punishing, but there’s real moral and intellectual rigour behind it.

With his powerful debut feature, Hungarian director László Nemes uses a single blank face to convey the unspeakable. His protagonist – the titular Saul (Géza Röhrig) – is a member of the Sonderkommando, a group of Jewish prisoners who empy the gas chambers in the Auschwitz-Birkenau concentration camp in exchange for paltry privileges during World War Two.

Through long takes and shallow focus, the camera is permanently trained on Röhrig’s face and, as the encircling horrors close in on the margins of the frame, we can only process them through his expression. In doing so, Nemes captures the horrors of the traditional Holocaust movie though the questionable impassivity of a single man.

This ingenious technique places the audience in the precarious role of moral arbiter. What we project onto Saul depends not only on our reaction to the material, but on our relationship with this notorious moment in history. In this sense, Nemes strips the Holocaust movie down to its most essential element – a sustained attack on the human body and spirit. The director trusts us to fill in the blanks – a bold proposition in the face of the film’s paralysing brute force.

At its core, Son of Saul is about the unwavering pursuit of a single act of decency in the face of overwhelming atrocity. As he clears out the gas chamber with his fellow Sonderkommando one day at the end of 1944, Saul finds the corpse of a boy he believes to be his son. Determined to give him a proper burial, he furtively sets out on a search for a rabbi to help carry out the deed. In a situation where death is ubiquitous, the act of burial is not only a humanising ritual standing at odds with the degradation of the Third Reich; it connects Saul to his persecuted religion. It is an expression of atonement, devotion and defiance.

This central idea of the burial is the anchor in the tempest, offering a clear moral trajectory through myriad horrors which can often threaten to overwhelm it. Indeed, stylistically, Son of Saul is calculated to stun. The camera chains us to Saul, but the sheer chaos of the world around him is omnipresent. The sound design is nauseatingly effective, with the hellscape of the camp imposing itself as a cacophony of screams, barks and the distressing white noise of human suffering. It is like being embalmed in a nightmare, engulfed in a fog of obscured horror. The audience is pummelled by the violence off camera, but Saul is our witness. He sees everything and we see him.

The notion of the burial – and the difficult tasks required to fulfil it – is what carries us through the maelstrom. As the turbulence hits you on a physical and emotional level, Nemes pierces through the clamour by giving the story a mythical bent. The idea of seeking a burial for a loved one, for example, comes from the Greek myth Antigone.

Similarly, the Sonderkommando are men in purgatory, carrying out the devil’s business. They usher their brethren through the chambers to Hades. They are the conduits between the living and the dead, and they bear the burden of watching their people die. Nemes strips the role of the Sonderkommando from its complex historical context; his cinema is one of physical force and powerful mythical imagery.

As a subjective document of war, Samuel Fuller’s The Big Red One from 1980 serves as an interesting comparison piece. Both pictures confront the enormity of history by focusing on the day-to-day lives of their protagonists. Fuller’s film, which carries the weight of anecdote, acts as a filter for the haze of his and star Lee Marvin’s own memories of war. It is a great war film because it finds enduring truth in everyday minutiae. In taking the subjectivity a step further, Son of Saul appropriates the experience of one man to find the crux of a historical moment which, in its scale and cruelty, still seems beyond comprehension.

More broadly, the Holocaust movie as a genre is about reconciling the personal with the historical, seeking understanding by projecting small stories against the wider sociopolitical narrative. In eschewing this approach, Nemes is able to locate the harrowing essence of the Holocaust – the degradation and destruction of human beings. Son of Saul could be seen as an effort to unshackle cinema from the traditional Holocaust narrative and, in turn, capture the core of the 20th century’s greatest atrocity. In this sense, Nemes’ method challenges the cinematic representations of the Holocaust, which, beyond the austere, unflinching eye, is the picture’s greatest strength.

The Palme d’Or winner that should have been.

It’s calculated to stun and, on those terms, it’s ruthlessly effective.

The brute force is punishing, but there’s real moral and intellectual rigour behind it.