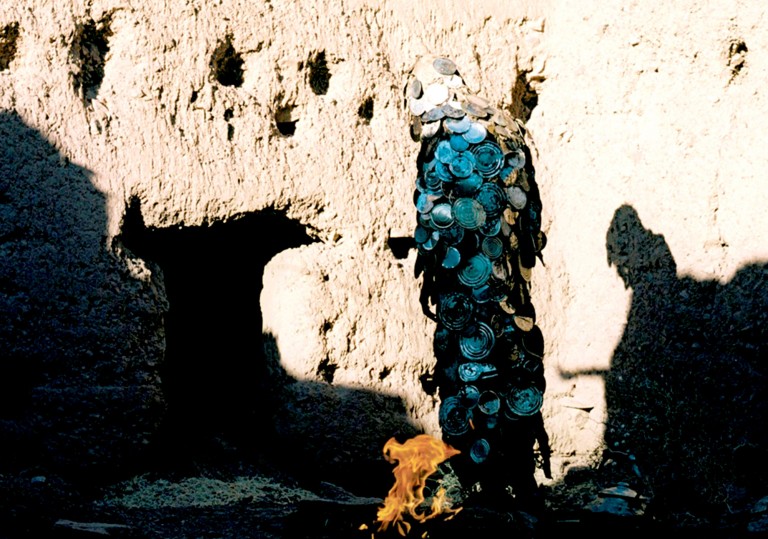 An extremely slippery film, but in an intriguing rather than annoying way.

Movies, particularly fiction features, have a habit of co-opting and re-arranging natural scenery and cultural tradition for their own selfish gains. A film crew might embed itself within an unknown clime and set about extracting the local colour as way of imbuing a mundane story with a modicum of exoticism and originality. Cinema as a colonialist entity, you might say. But what are the ethics behind this transaction? Is it okay for a camera lens to transform a real desert community into some sinister backward locale from yesteryear? Or a rocky causeway into awe-inspiring surface of some far away planet?

The Sky Trembles and the Earth Is Afraid and the Two Eyes Are Not Brothers is a new film by the British filmmaker Ben Rivers, and it further bolsters the theory that he’s one of the country’s greatest living directors. He explores this knee-jerk practice in an innovative, comic and, eventually, unnerving manner by observing the production of a movie which appears to be taking advantage of a vibrant landscape. French director Oliver Laxe is initially subject and then star of a film which playfully flits back and forth between fiction and reality, taking us in to and out of the film being made while constantly manipulating the relationship between Laxe and the locals helping out with the production.

The film drinks in the beauty – both visual and aural – of the immediate landscape, and can be enjoyed (like so many of Rivers’ past films) as a simple, psychedelic travelogue. It also acts as a cold document of small-scale, location-based alternative filmmaking: in one sequence, a young gentleman dressed as some kind of druid is asked to fall backwards off a small cliff and on to a stacked pile of cardboard boxes, and it’s a nerve-racking feat to observe even if we’re seeing it from a vantage which neutralises the intended drama.

The film this most recalls is Jean-Luc Godard’s thrillingly banal document of the Rolling Stones noodling in a studio, Sympathy for the Devil. That film also begins by focusing on the heady process of creation, chronicling how toil and cultural appropriation are eventually revamped into poetry, before becoming a different beast altogether. Laxe you could say is consumed by his own movie as locals (or people playing stereotypical versions of ‘locals’) lock him into a body suit festooned with tin can lids and force him to dance for them while taking pot-shots at his feet.

In some ways you could see this as a revenge movie, with Laxe getting a taste of his own cultural-colonialist medicine. As you’ll see, everything here is couched in uncertainty, as Rivers always remains at a sneaky remove from the heart of the material, never revealing his intentions outright, which in turn gives the film take on its own, fable-like quality.

An extremely slippery film, but in an intriguing rather than annoying way.