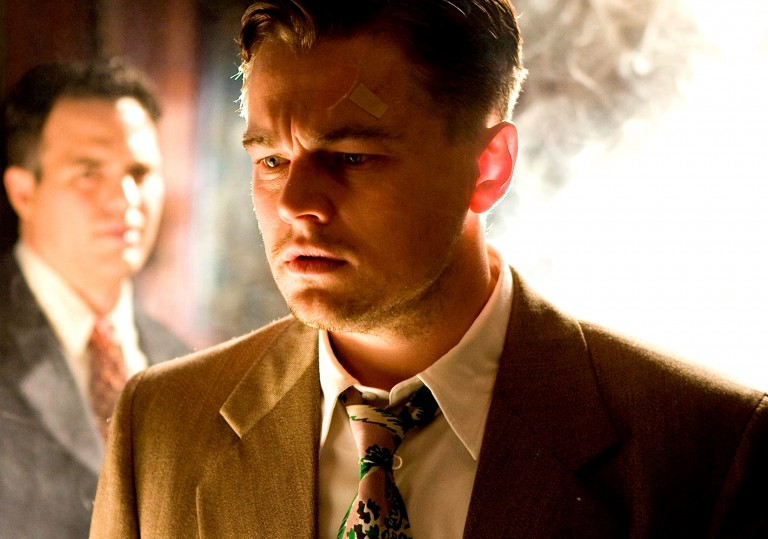 M Night Shyamalan would be proud.

For a film that wants to be watched again, you’ll hardly be hurrying to oblige.

Martin Scorsese’s latest is little more than a frustrating cobwebbed box of tricks and twists.

Dripping with Hitchcockian nuance and an uncertain, simmering sense of dread, Shutter Island is perhaps the closest Martin Scorsese has ever come to making a horror film. It is a film fat with atmosphere and laced with the storytelling subtlety we’ve come to expect from this much-admired American filmmaker. But while a surface glance places his latest as a must-see noir thriller, Shutter Island is ultimately little more than a frustrating cobwebbed box of tricks and twists.

Set in 1954 on a remote rock that houses America’s most deranged and dangerous criminals, we arrive ashore amid snarling, wind-licked waves in the company of Teddy Daniels (Leonardo DiCaprio), a hardboiled Federal Marshall and, as we later discover, a haunted WWII veteran. With his newly assigned partner Chuck (Mark Ruffalo) in toe, Teddy is solemnly ushered into the grounds of Ashecliffe Hospital by the deputy warden (John Carroll Lynch), before chief of staff Dr Cawley (Ben Kingsley) sets the stage.

A female patient has disappeared – vanished without so much as a breath left behind. Teddy tirelessly traces the scene and begins toothcombing his way through the island’s labyrinthine terrain, but with staff sending him down blind alleys and the patients hardly fit for questioning, he fixes his crosshairs on the facility’s seemingly unsavoury psychotherapy techniques. As he digs deeper, Teddy uncovers a disturbing truth that any sane man would find hard to accept.

Shutter Island is cinematically gorgeous; cut with thick chiaroscuro lighting that intensifies the feeling of claustrophobia resonating from the prison come hospital walls. The dank Gothic edifices and unruly, storm-lashed wilderness accentuate the isolation and suffocation of the place. There is no mistake: there is no getting off.

It’s a well acted film, too; the reassuring calm of Ruffalo and Kingsley anchoring DiCaprio’s retching, snorting performance that is perhaps his finest under Scorsese’s guidance. But in masquerading itself with meandering subplots and superfluous characters, all this is made far too easy to overlook. The problem, then, arrives in the film’s hurried final act, where a hitherto steady narrative gives way to an engorged twist that, whilst believable, insults the audience’s comprehension of everything that has come before.

The disappointment with this earth shattering revelation lies not in its execution, but in the realisation that any well worked dramatic toning that preceded it was merely a means to fluff up what is essentially little more than a cheap ruse. More eyebrows will raise than chins hit the theatre floor.

M Night Shyamalan would be proud.

For a film that wants to be watched again, you’ll hardly be hurrying to oblige.