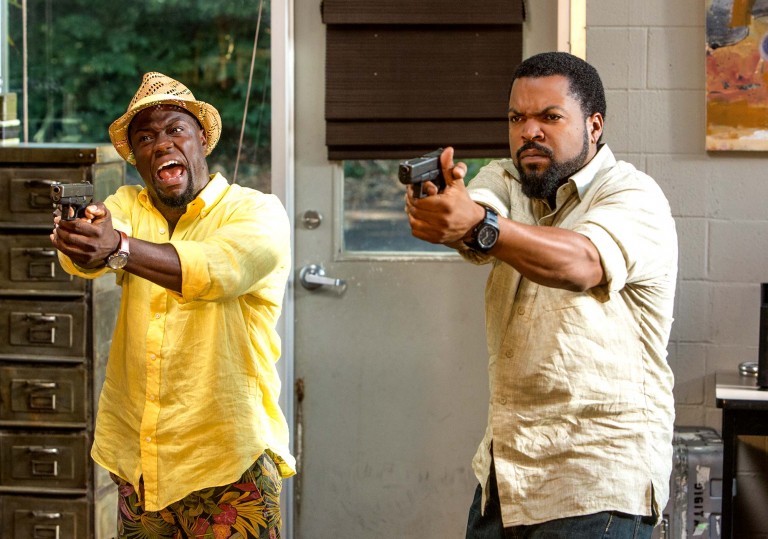 Will Ice Cube once more manage to sneak in the line ‘Today was a good day?”

No. Probably because he’s realised it’s more of a middling day.

Middling is far more preferable than comedy’s usual nastiness, though.

Ride Along 2 is Ride Along with all the bikini models massive box office success can afford. Pocket $154.5m on your first outing, and your second will surely relish transplanting its action from the streets of Atlanta to the glistening beaches of Miami.

It’s a pleasure best condensed into the sight of freshly graduated cop Ben Barber (Kevin Hart) stepping out into the city’s heat, and towards promises of busting open the city’s drug dealing network, dressed entirely in white linen. His future brother-in-law and fellow cop James (Ice Cube) may not seem so impressed, but as he whips out his arms to exclaim he’s only one breeze away from a’90s P Diddy video, you get some sense of this film’s own sort of giddiness at its own success. The Ride Along series has truly arrived.

It’s bigger, it’s flashier. Yet, also, exactly the same. For self-ascribed comedies, both Ride Along films are peculiar in their consistent, confident absence of actual jokes. It’s not that Ride along 2 isn’t explicitly unfunny; it’s without a sign of those mental crickets set chirping at the writhing discomfort of hearing gag after gag fall flat on its face. There’s just simply, quantifiably, a maximum of two jokes in this film. Two moments that have the weight and feel of something that you could look to and say, hey, that’s a joke.

The rest is entirely populated with moments described only as the preludes to jokes. The first build, the first little inklings that humour is on the horizon, before the big daddy punchline inevitably drops its load on the audience. It’s a film that elicits soft, little chuckles, and little else. A lengthy sequence sees an informant (Kevin Jeong) insist that Ben perform a series of tasks to prove he’s trustworthy. He dashes here, he dashes there, only for that elaborate prelude to culminate in a demand that he eats some nachos he found in the trash. And that’s it.

Still, as deprived of humour as it may be, Ride Along 2 is also pleasantly, stubbornly watchable. Maybe it’s reflective of the wider state of comedy cinema, where humour is so often driven into the dirt by its own maliciousness, that this film seems worthy of attention simply for presenting characters with interests outside of humiliating each other. Indeed, there’s little need to revel in nastiness when there’s so much assurance to be had in the rigorously defined personas of your leads. In Kevin Hart’s mania versus Ice Cube’s gruff, cinema shortcuts to the basic fact that everyone loves to watch a kitten clamber all over a Great Dane.

Will Ice Cube once more manage to sneak in the line ‘Today was a good day?”

No. Probably because he’s realised it’s more of a middling day.

Middling is far more preferable than comedy’s usual nastiness, though.