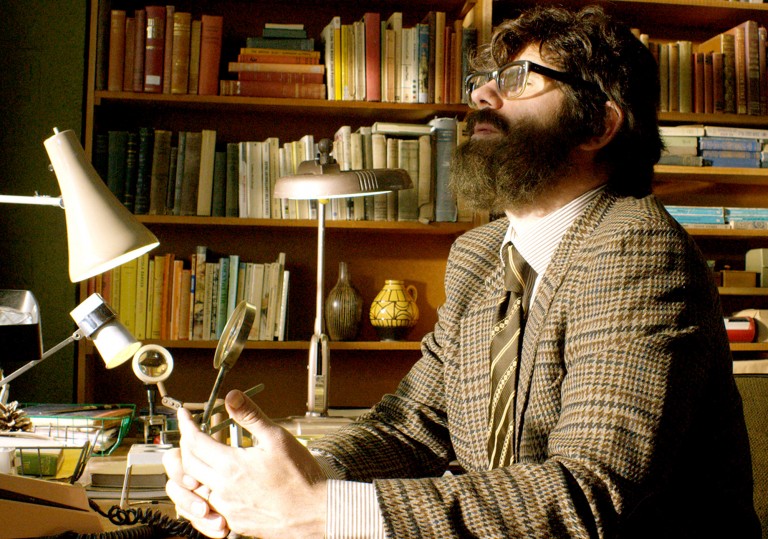 How to make a movie which amply articulates the physical experience of blindness? It’s a toughie, for sure, but directors James Spinney and Peter Middleton have had a damn good crack at it, their atmospheric feature debut bringing a taped confessional to life with suitably ambient visuals. Mild-mannered, bushy-bearded theologian and family man John M Hull lost his sight after a lifetime of ocular ailments. He documents his efforts to remain a working academic, a father, a son, a husband and a valuable member of society. Calmly methodical in his approach, he troubleshoots his way through this frightening new phase of his life and offers sound reasoning for his actions and his gently fluctuating psychological state.

A decision has been made to dramatise the audio, with actors playing the parts of John and his wife, Marilyn. They lip-synch along to recorded monologues and conversations, creating a ghostly disconnect between past and present. It’s an odd gambit that doesn’t entirely pay off. In a film about impairment and the feeling of having to muddle along and fill in blanks, the film too often tells rather than shows. There’s lovely sequence near the end in which John accompanies his toddler son to school. They rebound calls of “bye!” to one another as he enters the playground so John can hear that he’s reached the front gate safely. We see it happening, and we also hear John describing it, which kinda ruins the moment. It’s sensory overcompensation.

Dan Skinner’s plaintive and subtly expressive turn as Hull prevents the film from descending into full-bore melodrama, but it does in turn invent a character and a personal history which it tries to pass off as fact. When we see a “real” conversation dramatised by actors, that element of reality is recontextualised and altered. It combines documentary and fiction, but feels more like it aspires towards fiction and is weighed back by its documentary baggage. It wants the drama of fiction and the integrity of documentary. At the same time, maybe Spinney and Middleton are trying to emphasise the unreliability of vision, that the act of seeing can be defined in different ways. A similarly inclined film such as Edward Lovelace and James Hall’s The Possibilities Are Endless from 2014, on musician and stroke victim, Edwyn Collins, strikes that balance a lot more cleanly.

Hull, meanwhile, is level-headed, stoical and articulate to the extent that it’s never in question of whether he’ll eventually transcend his torturous predicament. Emotional volatility is, sadly, notable by its absence. The film’s most fascinating aspect is how Hull’s affliction contends with his religious beliefs, though it’s treated as a sub-theme at best. It’s especially interesting given his occupation, though the film retains its attention on the practical rather than the philosophical or poetic dimensions of the subject.

Despite the valuable work he has done to raise awareness of blindness, it’s questionable whether there’s enough of a story here for a full feature. “To gain our full humanity, blind people and sighted people need each other,” is the affirmative and profound expression which runs prior to the closing credits. Noble in its intentions and innovative in its execution, the film acts as a lugubrious prelude to that quotation.