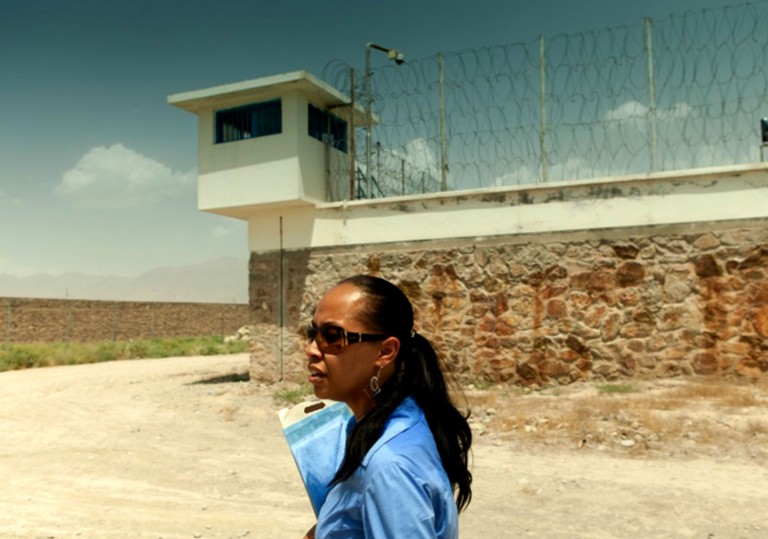 A female director filming the only female lawyer in Afghanistan? A documentary in the spirit of the times.

You can’t really enjoy it. But wow, very inspirational!

No moral to the story, but many lessons to be learnt.

This sensitive profile of a female lawyer working in Afghanistan is a real superhero movie.

Who said that James Bond-like spies and evil-conquering superheroes don’t belong in documentaries? Kimberley Motley doesn’t have a license to kill, she has a license to litigate. In Afghanistan. She doesn’t have superpowers but she’s definitely a member of the Justice League. She is an American woman, wife and mother. No need to explain further why documentary filmmaker Nicole Nielsen Horanyi thought that Motley would make a good subject.

Regular Taliban attacks during the filming make this a valuable document. It also captures Motley’s daily acts of defiance. Motley’s Law simply follows the daily routine of this astonishing woman. The moments of direct interaction with the camera are rare, but Horanyi finds other ways to make her talk. Whether it’s by filming the interviews Motley gives to magazines or by witnessing when she argues in court, we always get the feeling that we’re right at the heart of the issues at hand. This non-fiction story tackles several subjects, from the experience of being a female lawyer facing an informal kind of justice system in which Sharia laws are just as important as laws established by the government, to the American presence in Afghanistan and gun control in the United States.

All these issues are beautifully connected through the powerful imagery: wide shots of Kabul and its inhabitants are enough to give us an overview of the political situation. Playing over these scenes is the track ‘6 Foot 7 Foot’ by Lil Wayne, preparing us to follow Motley “on holiday” in the US to see her husband and children. The transitions between the two countries are violent for both Motley and the viewer. We flip from from fireworks to firebombs. Extracts of speeches by Barack Obama are inserted at strategic moments, often showing the gap between what we read the news and grim reality in the field.

What’s most interesting is that the film doesn’t paint an idealistic picture of human rights lawyers, it simply is an inspirational journey. From the beginning we learn that Motley first came to Afghanistan for money – she doesn’t only argue women rights cases because, “it doesn’t pay the bills”. But Horanyi manages to show her foolproof humanity and pragmatism towards the danger of the situation at any time. And that is worthy of superhero status.

A female director filming the only female lawyer in Afghanistan? A documentary in the spirit of the times.

You can’t really enjoy it. But wow, very inspirational!

No moral to the story, but many lessons to be learnt.