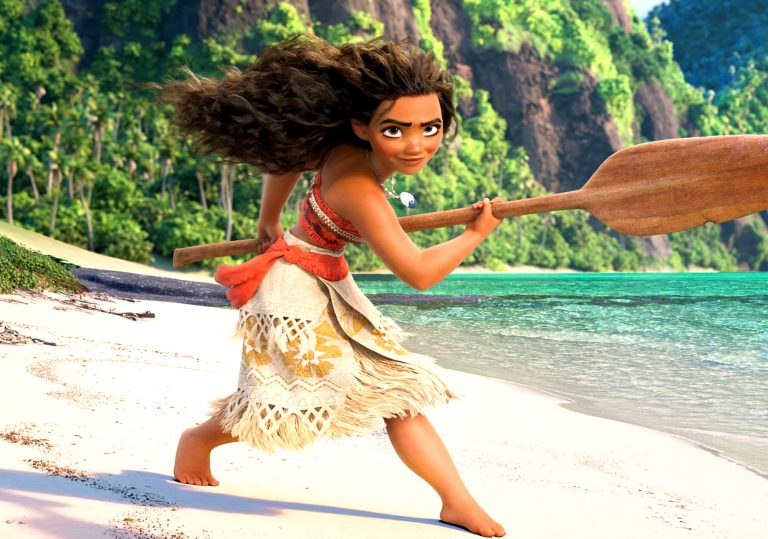 Amazing adventure, colour explosions and catchy songs. This is amazing.

One of Disney’s finest.

As America’s First Nation tribes stand together for the first time in history to defend Standing Rock from government and business interests threatening to destroy their sacred lands, Disney’s latest animated feature, Moana, directed by Ron Clements and John Musker, feels powerfully relevant. The film follows the daughter of a Polynesian chief who is fighting for the survival of her indigenous tribe’s way of life. But instead of the enemy being the fossil fuel industry, Moana is up against a giant lava demon who is decimating their island idyll.

Newcomer Auli’i Cravalho voices Moana. She is an emotionally strong and athletically built heroine who doesn’t need a male love interest to end up happily ever after. Instead, she is drawn into the vast Polynesian abyss, chosen by an ocean spirit to set sail and find Maui (Dwayne Johnson), a legendary shapeshifting demigod famed for raising islands from the sea, pulling the sun closer for extra warmth and communing with his sentient tattoos. Moana proves her kick-ass abilities through believable trial and error. She helps Maui undo his mishap a million years earlier.

This is a visually breathtaking film, every ripple of ocean current, every swoosh of hair, every underwater sparkle drawing you closer into this magical world. But the real magic of Moana lies in its cultural richness, in the way it portrays Polynesian life. The main cast all have Pacific Islands roots, and everything from the character details, song lyrics, and even a deep respect for coconuts, were all signed off by an Ocean Trust which Ron Clements and John Musker developed through their years of research across Polynesia.

The pan-Pacific flavour of the traditional celebrations and Samoan war dances adds depth to already captivating musical numbers, written by Lin-Manuel Miranda and performed in both English and Tokelauan. The film boasts ear worms that you won’t be able to fully sing along to, but are still some of the strongest Disney songs for some time. Cover versions of two potential hits, ‘Shiny’ and ‘You’re Welcome’, will surely start popping up on YouTube in no time.

Yes there are some fairly childish jokes and pointless side characters, but Moana takes you on a majestic journey across the Pacific, and you always feel safe in the young heroine’s hands. You trust fully in her resourcefulness and ability to navigate vast starry skies, as she fights to find out who she really is and where her true calling lies.

Amazing adventure, colour explosions and catchy songs. This is amazing.

One of Disney’s finest.