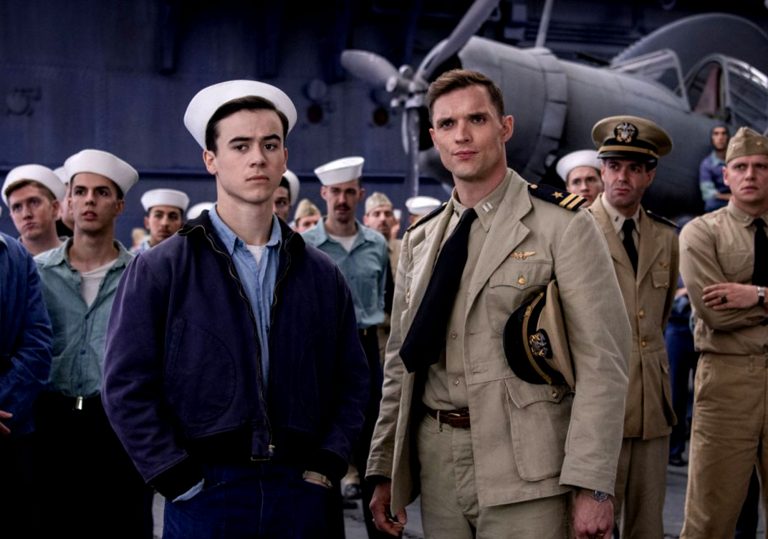 This spectacular war story’s got soul.

Roland Emmerich’s expensively mounted re-enactment of the Battle of Midway benefits from a balanced perspective.

With the exception of Michael Bay, no filmmaker working today seems to take as much satisfaction out of blowing things up as Roland Emmerich. Since leaving his native Germany for Hollywood in the early ’90s, the master of disaster has laid siege to some of the world’s most famous landmarks, and in invariably spectacular fashion. He’s battered the Burj Khalifa, obliterated the Statue of Liberty and Christ the Redeemer, reduced the Vatican to a pile of smoking rubble and wrecked the White House on three separate occasions.

But whether the basic premise of a Roland Emmerich film is alien invasion, ecological catastrophe, doomsday prophecy or the attempted assassination of a president, there is always a clear method to the mayhem – even when his intention is simply to give the audience a cheap thrill. Still, given his penchant for showy, seat-shaking action, it’s hard not to greet the prospect of Emmerich tackling one of the most significant and strategic battles of World War Two, which resulted in thousands of casualties, with a degree of apprehension.

True to form, Midway is an effects-driven epic that delivers explosive set-pieces with ferocious frequency. Yet it is also a remarkably even-handed piece of filmmaking, always striving to be something more than big, dumb and full of gun while hewing much closer to historical truth than might be expected. It depicts one of America’s worst military losses and subsequently one of its greatest victories from a strikingly humanist perspective – and from both sides. It wouldn’t be at all surprising to learn that Emmerich, in preparation for this film, had watched Bay’s Pearl Harbor and made notes on how not to drop a bomb.

In recounting the six-month skirmish that occurred following the Japanese ambush of the American naval base on 7 December, 1941, Emmerich has enlisted some serious acting muscle in the shape of Woody Harrelson, Dennis Quaid, Patrick Wilson, Luke Evans and Aaron Eckhart, who feature as various crew members and commanders of the fleet of US battleships that turned the tide of the Pacific War in the Allies’ favour. If movies were judged on the collective jawline strength of their cast, this one would go down as an all-time classic.

Unfortunately, much of Midway’s runtime is spent in the company of British actor Ed Skrein, who often plays nasty, thuggish characters but here stars as an almost cartoonishly heroic flying ace named Dick Best. He fails to convince in the role, giving off a suspiciously villainous vibe even when he’s reeling off patriotic soundbites during the middle of a dogfight. Wes Tooke’s prosaic script certainly doesn’t help, but when Nick Jonas is consistently acting your leading man off the screen you know you’ve got a problem.

Skrein’s shortcomings aside, Emmerich manages his A-list ensemble well, even as the principal cast becomes increasingly dispersed as the battle intensifies (for example, while Wilson’s intelligence officer frets over tactical maps and intercepted coded messages far away from the action, Eckhart’s Lieutenant Colonel is shot down over a remote Chinese village). But the success of Midway ultimately rests with the director’s decision to provide a more balanced version of events.

This story has been told before, notably in 1976 with Charlton Heston and Henry Fonda, and in 1942 via John Ford’s propaganda documentary, which contains actual footage of the battle (and is essential viewing). Historically, Hollywood has tended to obscure the enemy’s perspective, and not always with good reason. Emmerich’s Midway doesn’t fully resist the explicitly pro-American, pro-military agenda of its predecessors, but its attempts to understand and represent Japan’s unique culture and code of honour marks it as a distinctly modern war movie.

This spectacular war story’s got soul.