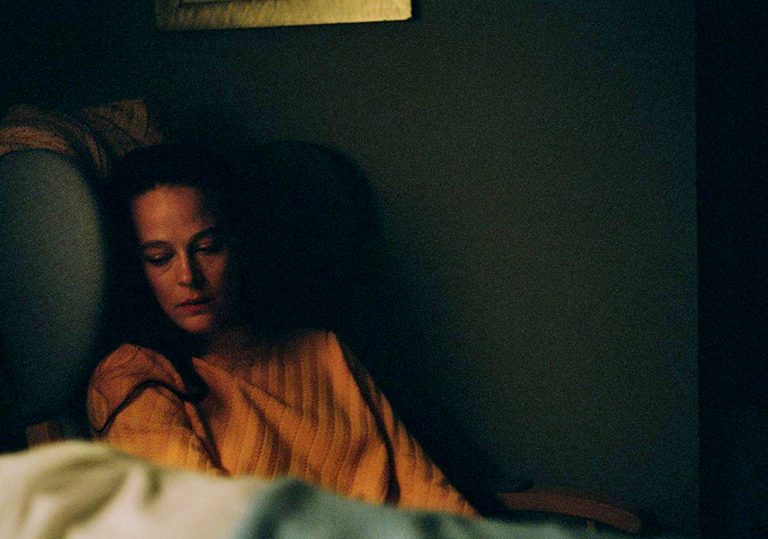 An ambitious, raw and emotionally sophisticated depiction of how individual dreams fare in the harsh light of familial bereavement.

A promising debut and a good sign for British cinema.

For the most part we try to live among our tribes – the chosen family who make sense to us and make sense of us, yet there are circumstances that cause worlds to collide. A relative at death’s door drives family members to a bedside irrespective of how well they get along. This is the set-up of Mari.

Charlotte, a committed professional dancer played by real-life dancer Bobbi Jene Smith, is preparing her directorial debut when she receives word that her ailing grandmother, the beloved Mari (Paddy Glynn), has taken a turn for the worse. The reaper is rarely considerate in his timing, however compounding the separation anxiety Charlotte experiences as she leaves London for small-town England is a lack of familial understanding in the form of her resentful sister, Lauren (Madeleine Worrall).

This first feature, written and directed by Georgia Parris, works by slowly building up a picture of the core tensions at play in Charlotte’s life via long naturalistic sequences of her alone and with others. The production makes a virtue of its low-budget by centring events within a handful of locations: the hospital where Mari is spending her final days; a dance studio in London; the family cottage where Charlotte joins her mother Margot (Phoebe Nicholls), sister, brother-in-law Rohan (Peter Singh) and nephew Billy (Reuben Kell).

Dramatic contrivances are thin on the ground, with Parris allowing the inherent power of the circumstances to come to the surface in everyday scenes all loaded by the spectre of death. Margot is berated by Lauren for starting to plan the funeral while Mari still clings to life. Margot responds indignantly that they spent months planning Lauren’s wedding. The sentimental idea that there is something sacred about this time is frequently disproved as the imperfections and frustrations of those present provoke unpleasant scenes.

Dance continues to prove a solace to Charlotte with the film’s three most striking sequences showcasing Smith’s astonishing capacity for physical contortions. Her mode of dance is almost painful to watch as her body is twisted into positions that defy nature. When she dances she loses herself in the moment, and the most harmonious scene between the three women occurs when Charlotte invites her mother and sister into her world, guiding them through stretches that literally enable them to loosen up.

Lauren is sketched as a woman who has made the opposite choices to Charlotte. Instead of a career she has a family. Instead of treasuring creativity she values responsibilities. An additional source of resentment is revealed in the course of the narrative. Parris would have done better to let these individual differences bubble under the surface, instead of finding voice in certain on-the-nose confrontations which jar with the film’s naturalistic tone. More impressive is Nicholls whose embodiment of a woman about to lose her mother oscillates between sharp pragmatism and soft grief.

Mari is a film that uses a humble set-up to explore an ambitious scope. Despite occasional false notes, what rings true is the expression of the clash between matters of private personal importance and general family significance. There is an additional cohering layer. Mari was an artist, and an inspiring force for Charlotte. Their relationship – which can no longer exist in the realm of dialogue – is conveyed through the mysterious emotions that Smith, who is quiet and self-possessed when acting, channels into violently expressive dance.

An ambitious, raw and emotionally sophisticated depiction of how individual dreams fare in the harsh light of familial bereavement.

A promising debut and a good sign for British cinema.