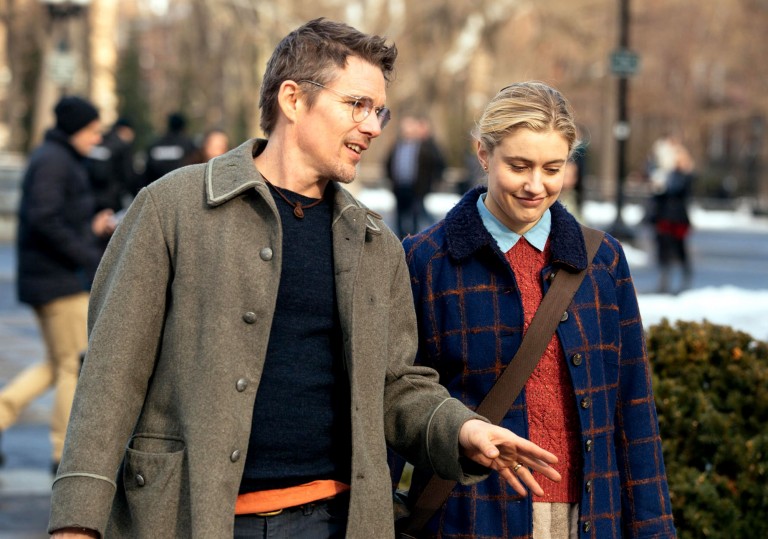 What an excellent cast!

Greta Gerwig and Julianne Moore are having the best time.

It’s fun in the moment, but too throwaway to last.

Greta Gerwig has the time of her life in Rebecca Miller’s shallow portrait of middle-class ennui.

Author and filmmaker Rebecca Miller reflects on relationships, parenthood and all the messy stuff that come with them in this light, fast-paced romantic comedy set in the world of high academia. She pits choice against fate on issues of the heart and the outcome is an enjoyably quirky though somewhat detached exploration of the many frustrations of modern love.

Maggie (Greta Gerwig) declares to her best friend Tony (Bill Hader) that she wants to have a baby through artificial insemination as they stroll through a Brooklyn food market. Tony, a father in a long-term relationship with Felicia (Maya Rudolph), whose young son sports an oversized “Imagine there’s no fracking” badge, gently mocks her request. She explains that none of her relationships last, so she might as well take care of business on her own.

Miller is aware of and comfortable with the middle-class ennui she portrays. It’s often preposterous, and she fully embraces that. She also pokes fun at academic chitchat and ultra-competitiveness between ficto-critical anthropology professor John (Ethan Hawke) and his super successful wife Georgette (Julianne Moore). When Maggie bumps into John in the university office over a pay cheque mishap, the two become friends and embark on an affair which in turn ends his marriage.

But the story has only just begun at this point, with the viewer being brought forward three years to the point where Maggie realises John may not be the man for her. At the peak of her exasperation she asks, “Am I so capable I don’t deserve any attention?” Then John begins another long phone call with his ex-wife on the finer points of the novel that he and Maggie initially bonded over. Instead of simply leaving him, she formulates a plan that she believes will make everyone happy.

Contempt for the self-absorbed male writer was superbly handled in Alex Ross Perry’s 2014 film, Listen Up Philip. Lina Wolff’s 2016 novel, ‘Bret Easton Ellis and the Other Dogs,’ also covered similar frustrations in the literary world, but where these take the form of scathing and witty reprisals, Miller takes a more frivolous tack and laughs at the absurdity of it all. Her world, by design, is populated entirely with caricatures, yet unlike the work by Perry and Wolff, Maggie is selfless rather than self important.

Despite the gameness and joviality of an impressive ensemble cast, Miller doesn’t dive deep enough when it comes to locating profound insight in her characters’ psyches. The actors are clearly having the time of their lives and, in the moment, their interactions are a delight to behold. Plus, the platonic dynamic between Maggie and Tony is wonderfully observed. What Maggie’s Plan lacks in nuance, however, it makes up for with some inspired, invigorating comic moments, including one particularly amusing punk-rock cameo.

This film marks a continuation of themes originally explored in Miller’s previous, The Private Lives of Pippa Lee: the nobility of a female’s emotional journey and the affect that self-sacrificing ways can have on both inner and outer life.

What an excellent cast!

Greta Gerwig and Julianne Moore are having the best time.

It’s fun in the moment, but too throwaway to last.