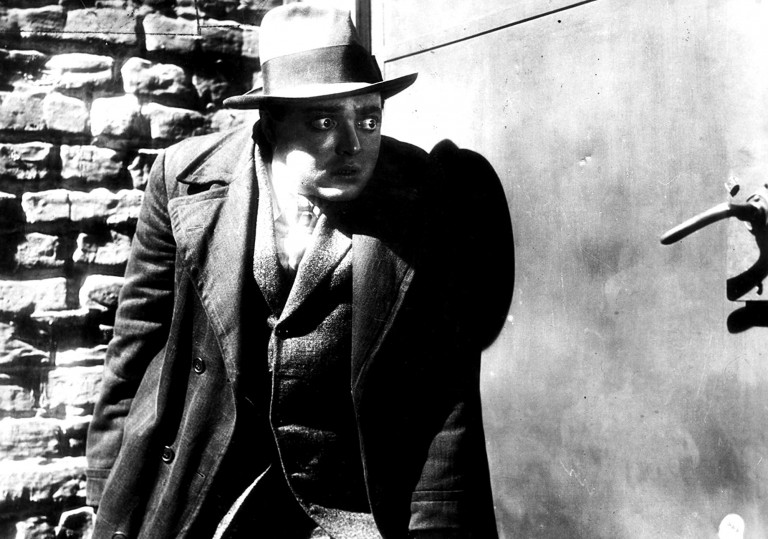 You can rarely go wrong with Fritz Lang.

More powerful and relevant than ever.

You’ll never look at a novelty balloon in the same way again.

If there’s one thing that Fritz Lang’s 1931 film M still teaches us, it’s that beyond all else, filmmakers should strive to place images on the screen that he or she sincerely believes will have never been seen before. An astounding hybrid of Bible-black film noir and a lithe take on German expressionist dynamics in which the shadows are literally out to kill you, there’s nary a shot in this film which (still) doesn’t feel as fresh as a new-growth daisy.

Certainly marvel at froggy Peter Lorre and his startling turn as Hans Beckert, a flip career child murderer whose sick, slick methodology masks compulsions over which he admits to having no physical control. And marvel too at the film’s consistent moral backflipping and refusal to carve up society into neat enclaves of good and evil, suggesting that the thin blue line between order and anarchy may be a self-governing myth to keep the underclasses from revolting. And marvel at the editing which is used to compare and contrast viewpoints instead of just idle parallel plate-spinning.

But maybe M is a film most impressive for its agile counterpointing and the way it deals in brutal ironies. On the evidence of the film’s first hour, Beckert is presented as an unhinged monster, the exact projection of the public’s caterwauling hysteria. But it’s this image, and the subsequent shattering thereof, which makes the film so exciting and dangerous, as Beckert is later reduced to a cowering freak, maybe even into a state of naive and defenceless arrested development which in turn gives him a taste of his own sickening medicine.

That’s perhaps not Lang’s intention, though, as he remains beguiled by the process of mob justice and not whether there is any ambiguity over Beckert’s guilt. Actually, the question is really whether such thing as mob justice (and perhaps by extension, democracy) can abide to terms of levelheadedness, fairness and basic rational thought. That Lang makes no bones about the assailant’s misdeeds makes the finale all the more powerful, ushering in sympathy for the devil and suggesting that the crowd will do anything in their personal power to put a collective end to the perceived blights of society.

When I first saw this film in the late ’90s, I wasn’t entirely taken by it due to its hysterical mode. How could one lambast hysteria in a manner which itself came across as hysterical? Yet, the time is exactly right for a reappraisal of M, as the points it makes could be applied directly to the omnipresent echo-chamber of 140 character delirium that is Twitter, a giant hall for friendship and joy, but also a place for bullying and groupthink.

Though M was released at a time when the German people were starting to take note of the Nazi party and their ultra-antagonistic form of political manoeuvring (to put it very lightly), the film perhaps highlights the vague fascistic undertow of modern social media platforms. That’s not to say that we’re all Nazis, more that democracy and freedom can easily be mistaken for simply agreeing with the reactionary ideas of your more articulate and forceful neighbour.

You can rarely go wrong with Fritz Lang.

More powerful and relevant than ever.

You’ll never look at a novelty balloon in the same way again.