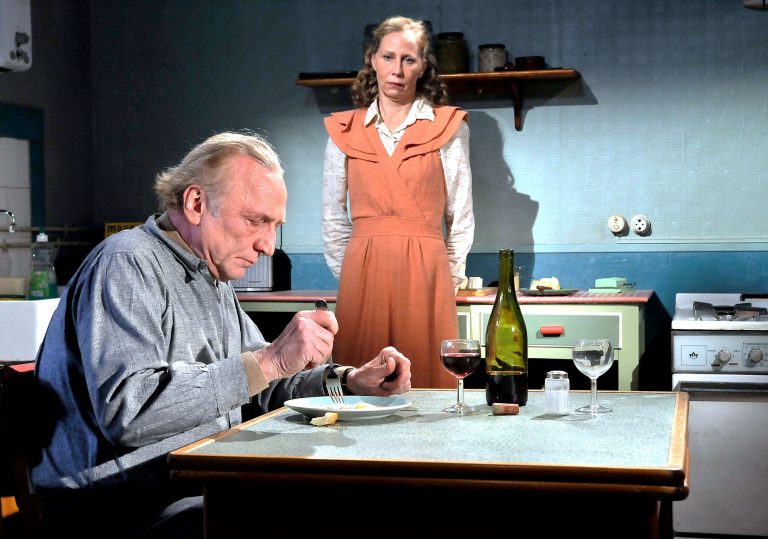 Welcome back Aki! It’s been far too long.

A gorgeous hymn to the struggles of the working man.

One of his most charming films.

As a public figure, Finland’s master of the retro deadpan fairy tale, Aki Kaurismäki, appears to go out of his way to present himself as a cantankerous, gin-soaked misanthrope. Yet the devotional reverence with which he creates and talks about cinema would suggest otherwise. It’s clear he’s a big softy at heart.

Le Havre is his first new work since 2006’s hang-dog odyssey, Lights in the Dusk, and from the very opening frames it presents a director who’s out to remind the world why we fell in love with him in the first place.

This is, in the very loosest sense, a film about the problem of people-trafficking, though Kaurismäki’s interest in the minutiae of contemporary politics amounts to less than zero. Le Havre is a humanist fable about the nature of goodness that would’ve probably had Capra rummaging for his Kleenex as the lights came up. It also examines how society and the individual have conflicting definitions of what comprises a good deed.

André Wilms, an actor whose majestically crumpled visage exudes life and experience, plays a shoeshine named Marcel Marx. As an act of no-strings-attached compassion, he decides to take a young African stowaway named Idrissa (Blondin Miguel) under his wing and help him to connect with his family in London.

All this despite an extremely meagre income and the recent hospitalisation of his doting wife, Arletty (Kaurismäki regular, Kati Outinen), for what appears to be a life-threatening stomach ailment.

If Marcel represents the individual, then Jean-Pierre Darroussin’s wily Inspector Monet is the moral sword of Damocles wielded by society at large, on constant watch as Marcel goes about his supposedly nefarious business. Tantalising subplots flesh out the close-knit community, not least Marcel’s relationships with a local boulanger and an Asian immigrant named Chang.

By its final reel, when the fruits of Marcel’s philanthropic endeavours have materialised (including an ad-hoc local rock benefit begrudgingly headlined by Le Havre’s answer to Elvis, Little Bob), Kaurismäki’s film gently floats into the realms of the magical.

Yet the potential was there from the off, as the director has pointedly suffused his material with romantic allusions to classic French cinema: Inspector Monet, with his tipped Homburg and raincoat, is pure Melville; Monet and Marcel’s strained mutual respect recalls Gabin and von Sternberg in Renoir’s La Grande Illusion; and Arletty pays lip service to the star of Marcel Carné’s melodrama, Les Enfants du Paradis. This is the real world shot through with romance.

Those familiar with the trademark visual mode of Kaurismäki and cinematographer Timo Salminen will find with Le Havre it’s a case of old hands working at the pinnacle of their wistfully ironic game. Each shot is pared down to its core constituents, yet everything remains exhaustingly rich and poetic.

Marcel’s sparsely decorated abode is especially resonant: the walls washed in steel blue and the delicate, still-life placing of ornaments and pictures tell us all we need to know about Marcel’s frugal, lonesome existence. Here is a director who can make ’60s formica coffee tables throb with sadness. He’s that good.

Welcome back Aki! It’s been far too long.

A gorgeous hymn to the struggles of the working man.

One of his most charming films.