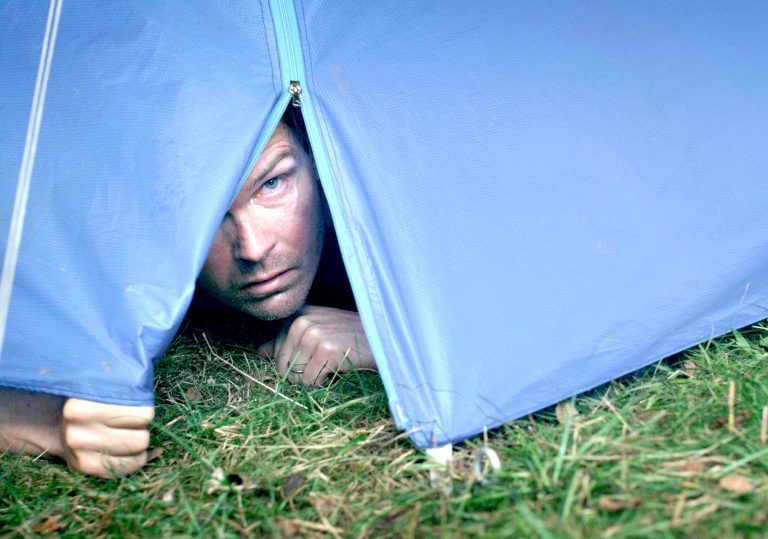 The poster has a cat on it, so interest is instantly piqued.

A Twilight Zone of grief.

Three figures walk through the woods: giant Sampo (Morad Baloo Khatchadorian), raven-haired Cherry (Brandy Litmanen) and old, suited Mog (Peter Belli). They are accompanied by both a live dog and a dead one (which Sampo carries), and Mog whistles and sings a song about the death of his rooster, and about the song (“koko-di koko-da”) that it will never sing again.

These same three grotesques are then shown painted on the side of an antique spinning music box which eight-year-old Maja (Katarina Jakobson) stares at through a shop window while her parents Elin (Yiva Gallon) and Tobias (Leif Edlund Johansson) desperately look for her. It is the day before Maja’s birthday, and the family of three, all dressed in rabbit make-up, have crossed over from Sweden for a celebratory vacation in Denmark.

This prologue to Koko-di Koko-da, wherein media are mixed, borders are crossed, the folkloric intrudes upon the real, and loss and death hover at the margins, serves as an apt introduction to the narrative that will follow, as three years later, Elin and Tobias are once again vacationing together, only this time under less joyous circumstances. After all, the opening sequence ends, suddenly and arbitrarily, in tragedy, and that event is still haunting the two parents now as they drive and argue bitterly, the merest shadow of the happy couple they once were.

“You don’t even know where we are, you just keep on going,” Elin complains, and while her words have an immediate, literal reference (they are lost on a forest road at night), they also resound with broader, more metaphorical undertones. Moving on autopilot through their empty lives, this pair is also drifting apart.

When they finally stop to camp in the middle of nowhere, Tobias will wake up in the morning to find himself vainly (and repeatedly) trying to fight or flee murderously sadistic invasions by Mog, Sampo and Cherry, while Elin, all alone, will be drawn through the wintry landscape to a private theatre where her unresolved feelings of loss will be staged as a shadow play with rabbits.

Written and directed by Johannes Nyholm, Koko-di Koko-da is a dark allegory – part folk horror, part surreal psychodrama – in which two lost souls live, or perhaps dream, their way through the different, seemingly inescapable permutations of their trauma in an isolated location. This woodland setting, suggestive both of a fairy tale and a classic camp slasher, becomes the site where problems are confronted with disoriented imagination and panicky fantasy, and where visitations of random, unstoppable, wrenching violence meet moments of theatricalised epiphany.

Ultimately, when they wake to face the mo(u)rning, Tobias and Elin may still find themselves in a rut, but at least now they are in it together again, rather than struggling separately to find a way out of their harrowing emotional impasses – and their passive-aggressive recriminations. It’s a strange, mythically menacing journey through grief and the self-torments of guilt.

The poster has a cat on it, so interest is instantly piqued.

A Twilight Zone of grief.