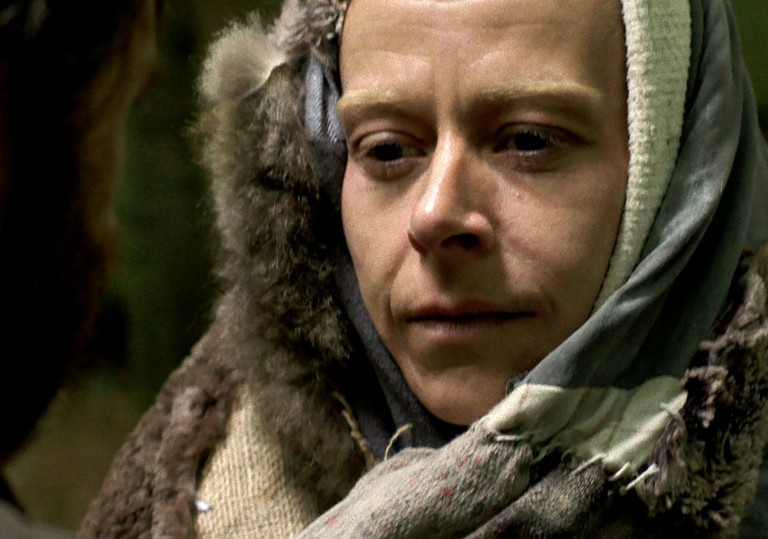 A hole lot more interesting than it should be.

Belgian filmmaker Tom Geens’ second feature does what it says on the tin; its central characters, John (Paul Higgins) and Karen (Kate Dickie) are a middle-class couple who live – quite literally – in a hole. Somewhere in the Pyrenees, the pair have settled into a comfortable routine; John hunting and foraging, skinning and roasting, while Karen stitches, sews and sleeps. In fact, their peaceful woodland life seems to be going smoothly, except for the fact that Karen can’t bring herself to leave the hole. John is patient, massaging his stubborn, fearful wife’s out-of-practice joints with attentive tenderness, but his attempts to coax her from the hovel are mostly futile.

Lured out into the open by the promise of rain on her skin and fresh air in her lungs, we finally get a proper look at Karen. While John is sturdy and athletic, she appears to have aged prematurely, her frail body contorted into a permanent, Gollum-like hunch and ravaged by too much time down under. Her excursion is cut short by the arrival of a poisonous spider that bites her, sending her into anaphylactic shock. John is forced out of the forest and into the nearby town in search of medical assistance. It quickly becomes clear that life in the hole is very much a choice rather than a necessity.

Geens is in no hurry to reveal John and Karen’s tragic backstory, though with its brisk 105 minutes runtime, the plot unfolds at a languid pace, with ample time taken to establish John and Karen’s relationship before bursting the bubble of their insular world. When Andre (Jérôme Kircher), the kindly local pharmacist enters that fray, the equilibrium of their world is unbalanced. John craves company, and soon the two are fixing Andre’s tractor and swapping stories about saucisson sec behind Karen’s back.

The harshness of life in the wild is tempered by Sam Care’s lush cinematography, his camera capturing the countryside’s rough beauty – from the misty moon that constantly peeks over the edge of the nearby woodland, to watercolour vistas of the forest that becomes a temporary home for the couple. Still, Geens makes certain never to spare us any gory details; at one point a rabbit is killed and methodically dismembered; then we watch Karen taking a shit. The director’s assured hand means that this shifting between tones works for much of the film, helped along no end by a moody electronic score from Bristol-based band BEAK (a side project headed up by Geoff Barrow of Portishead).

It’s a shame, then, that the film loses its way in the final stretch. The first two acts honour the gnawing agony of trauma, showing how psychological pain can subsume the lives of those that experience it – and how difficult it can be to wrench back and reclaim that life. Geens treats John and Karen’s story with curiosity and kindness; his gaze is intimate rather than anthropological. Yet, stripped-back storytelling is swapped for heavy-handed symbolism in the film’s final act, and it’s frustrating to see the odd, inviting tone abandoned for something more detached. Still, Geens’ knotty, slow-burning meditation on self-preservation is well worth a trip down the rabbit hole.

A hole lot more interesting than it should be.