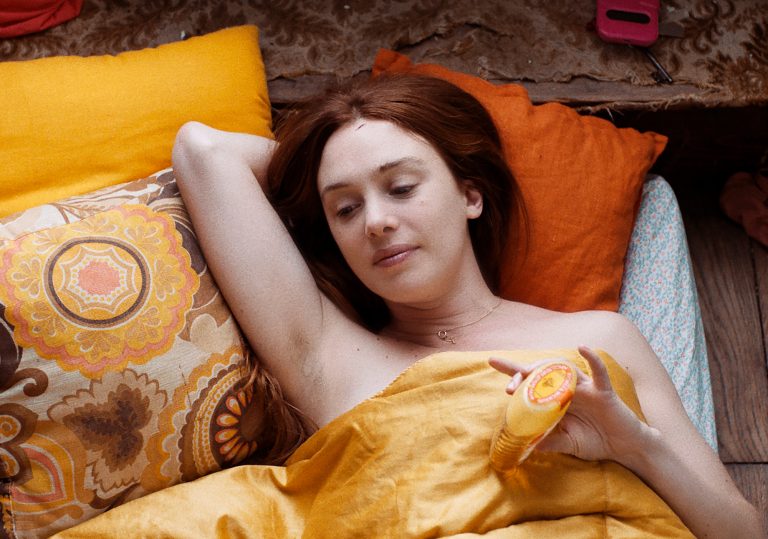 Laetitia Dosch is breathtakingly charismatic. You can't take your eyes off her, even on repeat viewings.

A character study, a feminist awakening, and a piquant comedy all wrapped in one.

We first meet Paula with a giant bandage on her forehead, covering the wound where she headbutted her ex-boyfriend’s door. She has just been turfed out of his Parisian flat, where he works as a well-known photographer and she, presumably, pads around like a spoiled housepet. Léonor Serraille’s debut feature film gently probes female identity and the smothering influence of the ‘genius’ man, and it does so with all but the slightest imposition from the man himself. Paula, instead, is the sole focus of Jeune Femme.

Laetitia Dosch stars as the lost thirtysomething who has to regain her sense of self after serving as an artist’s muse for a decade, and her performance is magnetic. Words tumble from her mouth at speed, her red hair flies in her face, and she’s a constant whirling dervish of energetic feeling, but the truth is Paula doesn’t have a very deep sense of self. Post-breakup, she is broke, homeless, and directionless after being unceremoniously replaced by a younger girl. She rubs people the wrong way, she’s unqualified for most jobs, and even her mother is estranged from her.

As the film progresses, Serraille follows Paula as she searches for work and attempts to figure out her place in the world on her own terms. Along the way, she steals her ex’s fluffy white cat, befriends a girl through a bizarre misunderstanding, becomes a loving but irresponsible au pair, and attempts to patch up her relationship with her mother.

With the manic energy of its lead performance left to speak for itself, Serraille’s style is one of confident realism. There are run-down hotels, lonely public parks, unfriendly rain-soaked streets: Paris here is an ugly, overwhelming metropolis, with no residue of its old romantic reputation but for in the praise given it by Ousmane, a security guard who befriends Paula. He’s an immigrant, and from his outsider’s eye, he sees the city’s appeal. To Paula, who once was graced with its artistic and financial limelight, it’s less attractive. Leonor Serraille directed Jeune Femme while pregnant, and when similar topics arise in Jeune Femme, Paula’s strangely intimate conversation with a female doctor feels strikingly genuine.

Yet Jeune Femme is also drolly funny, as when Paula joins a tyrannically feminine retail team in a shopping mall lingerie bar. Slightly unhinged though she may be, there’s a warmth and determination in Paula that’s impossible not to like. She’s a grown woman in a state of arrested development, but she loves fiercely and learns independence in a piecemeal, occasionally painful way. Serraille’s film is one of the most satisfying and gently feminist character studies of recent times, using as its guiding force the sheer force of personality of its leading actress.

Laetitia Dosch is breathtakingly charismatic. You can't take your eyes off her, even on repeat viewings.

A character study, a feminist awakening, and a piquant comedy all wrapped in one.