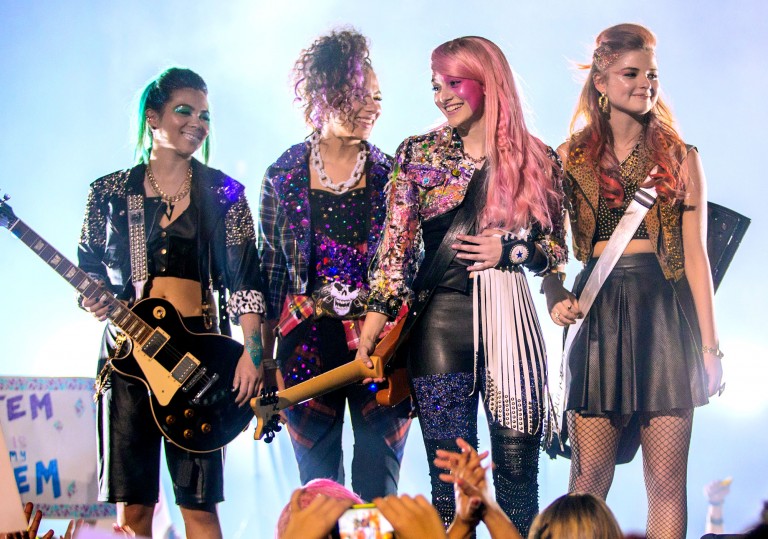 The director of Step Up 3D tackles a much beloved ’80s cartoon.

A heartfelt Hollywood oddity that doesn’t deserve its “disaster” label.

Jon M Chu’s Jem and the Holograms begins with a series of makeshift musical performances and yearning video confessionals taken from actual YouTube accounts. Together they form a mosaic of virtual expression that connects the film’s ramshackle narrative with our collective identity crisis in the social media age. Blurred lines are important to this neon-hued adaptation of the popular 1980s television cartoon, which depicts the rise and fall story of an overnight internet sensation and her three bandmate sisters.

Instead of fearing digital technology, the film embraces it wholeheartedly. During an early monologue to the camera, lead singer Jerrica (Aubrey Peeples) explains that the internet is her “closest friend.” Yet her younger sister Kimber (Stefanie Scott) is the one who lives life virtually, documenting every second of the day on Facebook, Instagram, and the like. Long ago, the two were adopted by their Aunt Baily (Molly Ringwald), who was already raising two foster daughters of her own, Shana (Aurora Perrineau) and Aja (Haley Kiyoko).

Now teenagers, the sisters have different interests and attitudes but are still connected by a strong familial bond and sense of artistic freedom. This closeness is challenged after Jerrica records a powerful performance as Jem, her alter ego who becomes a mysterious pop culture phenomenon after the video goes viral. Hollywood comes calling in the form of a tenacious and nasty pill of a music mogul named Erica Raymond (Juliette Lewis), who woos the foursome with promises of fortune and fame.

Jerrica’s self-aware voice-over narration communicates Jem and the Holograms’ core themes. Her ongoing monologue tries to debunk the myth of female hysteria while confronting the doubt inherent in honest artistic expression. The ghost of her inventor father looms over the proceedings, namely in the form of an uncompleted robot named “Synergy” that eventually leads Jerrica and company down a tangential path of self-discovery.

If Chu can’t quite decide which genre or story to embrace – this version of Jem clumsily mixes rock opera, sci-fi and melodrama – he’s in brilliant control of certain moments that merge new technology and classical Hollywood editing. During Jerrica’s initial online negotiation with Erica, Chu crosscuts to a YouTube video of duelling drummers. The escalating battle of beats mirrors the one between the characters, producing a thrilling juxtaposition of online entanglement.

Yet Jem and the Holograms has too few of these highs, getting bogged down in meandering, conventional plot points and dumb dialogue. Whereas Chu’s Step Up 3D leaned heavily on the blissful physicality of bodies in motion, his latest only hints at the kinetic visuals in Jerrica’s digital playground.

For all its flaws (and there are many), the film doesn’t deserve the vitriol lobbed at it by dismissive critics and angry fans. Chu’s weird, heartfelt vision has a distinct perspective regarding online wanderlust and understands the vibrancy of colour (a ferris wheel on the Santa Monica pier looks like a spaceship ready to lift off ). But most of all it appreciates the tenacious will to be real in a world where everything is an illusion, no matter how ill-fated the pursuit.

The director of Step Up 3D tackles a much beloved ’80s cartoon.

A heartfelt Hollywood oddity that doesn’t deserve its “disaster” label. 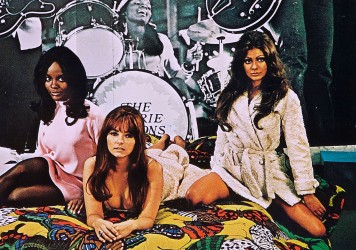