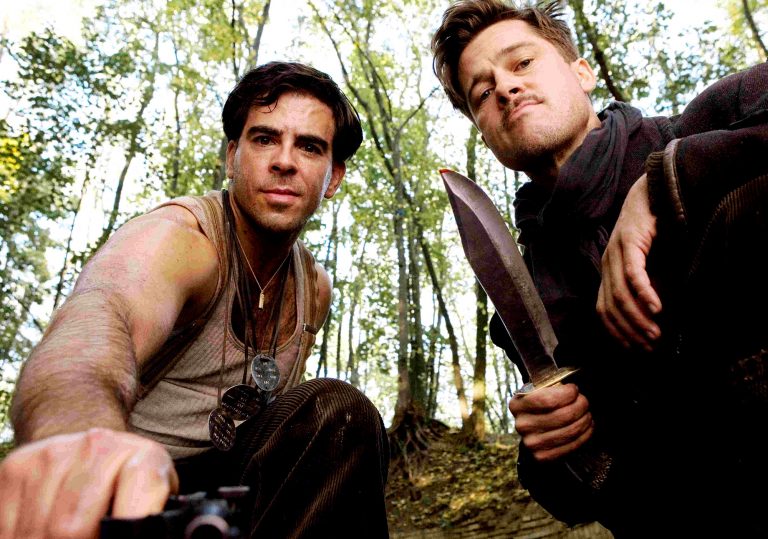 Hey, it’s QT. But can he be trusted with one of the most painful episodes in history?

Amazing whenever the Jew Hunter is on screen. Wait, is this movie still running?

Too long and too full of itself, but saved by one genius performance and some hot flashes of classic QT dialogue.

Inglourious Basterds starts with the best scene Quentin Tarantino has written since Dennis Hopper told Christopher Walken he’s an egg-plant in True Romance. Whisking volatile comedy with powderkeg violence, it’s as good as it gets. And it never gets that good again.

Unfolding in German, French and English, this terrific opening scene sees the villainous ‘Jew Hunter’, Colonel Hans Landa (Christoph Waltz), murder a Jewish family hiding in a French farm. But one girl (Mélanie Laurent) escapes, growing up to run a Paris cinema where she hatches a plot to kill Hitler and the Reich’s top brass when they attend a movie premiere.

What we have here, then, is QT gleefully harnessing film’s power to rewrite history. Meanwhile, Michael Fassbender’s British agent (a film critic by training) gets orders from an unrecognisable Mike Myers to hook up with German actress-cum-spy Diane Kruger to take out Hitler himself. Once again, it’s tough-grrls who are the real heroes in QT’s world of violent men. And Kruger provides the trademark foot fetishism.

So where, exactly, are the Basterds in all this? Well, quite. After Brad Pitt’s redneck half-Apache leader Aldo Raine demands his squad of Jewish-American soldiers each bring him 100 Nazi scalps, they barely feature. After fearsome introductions, infamous Nazi-killing German Til Schweiger doesn’t say a word in the film, and blankety-blank Eli Roth leaves you wishing they’d cast a proper actor as the infamous ‘Bear Jew’. Woody Allen would’ve been good.

QT’s war opus is topped and tailed by shocking massacres, but in-between, the violence erupts only in short, bloody blasts. The devil is in the dialogue. Tarantino’s best action set-pieces are all verbal: the farmhouse scene, a tavern drinking game in which an SS officer grows suspicious of Fassbender’s German accent, and, basically, every time Landa opens his mouth.

Nothing in the entire movie is as funny, frightening or sophisticated as Christoph Waltz’s unforgettable performance. All silken menace veiling sociopathic derangement, he’s full of tiny intricacies that don’t come from the script – whether carefully undoing the fastenings on a notebook, or eating apple strudel (“Ah, ah! Wait for ze cream…”).

Trouble is, the rest of Basterds drags on and on and on. Over the last decade, Tarantino’s movies have become less frequent and more indulgent. Now it’s got to the point where he repeats long dialogue scenes until you’re tired of hearing people talk. Inglourious Basterds ran very baggy at its Cannes cut of two hours and 41 minutes. It’s no exaggeration to say that an hour could have been hacked away like a Nazi scalp.

Tarantino has been wrestling with the script for more than a decade and he still hasn’t nailed it. He even hauls in Samuel L Jackson to interject several voiceover-interludes when he runs out of ideas for how to tell the story.

By the bizarre, blazing sado-massacre of a finale, QT has let loose completely: flashes of cine-genius curdle with crude, crazy juvenility, although it doesn’t stop this being his most purely enjoyable film since Kill Bill: Vol. 1. The banana-chinned supergeek himself obviously likes it – just wait for the last line.

Hey, it’s QT. But can he be trusted with one of the most painful episodes in history?

Amazing whenever the Jew Hunter is on screen. Wait, is this movie still running?

Too long and too full of itself, but saved by one genius performance and some hot flashes of classic QT dialogue.