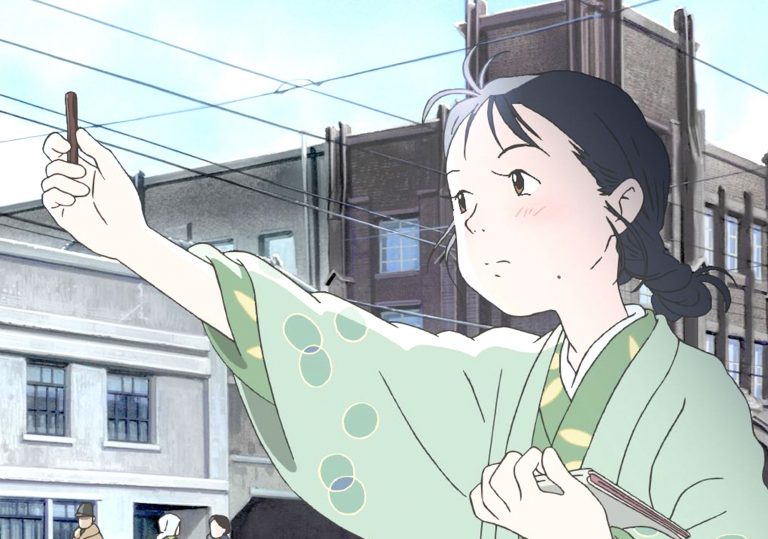 Recent winner of the Japanese Academy Award for Animation of the Year.

Undeniably gorgeous, with a few elegant animated flourishes, but rather toothless in the telling.

A minor entry in the small canon of animated dramas set during the closing days of the War.

Sunao Katabuchi, who early in his career served as Assistant Director on Hayao Miyazaki’s Kiki’s Delivery Service, funds himself standing on the toes of his former Studio Ghibli mentors in this crowd-pleasing, and crowd-funded, World War Two melodrama. Adapted from the manga by writer-artist Fumiyo Kōno, In This Corner of the World begins in 1933, and follows the life of a young woman called Suzu as she grows up in rural Hiroshima, moves to Kure to marry a navy clerk, and contemplates returning home – all the while living under the shadow of what could be called Chekhov’s A-bomb.

With its painterly washes of watercolour, the film recalls Ghibli co-founder Isao Takahata’s The Tale of the Princess Kaguya, although with stronger, more defined linework and a draughtsman’s eye for architecture. Likewise, Katabuchi can’t shake the comparison to the older animator’s indisputable masterpiece, Grave of the Fireflies, which adopted a similar strategy of restaging the closing days of the war from the point of view of innocent Japanese citizens. Only replace Fireflies’ pair of orphaned siblings with our unfortunate protagonist, and swap out Takahata’s harrowing, fiercely unsentimental perspective for something a little more bittersweet.

Katabuchi peppers his film with nostalgic details, from Suzu’s youthful activities, picking pine needles in the forest near her home, to the war work taken up by Japanese women in the early 1940s, dishing out rations to local families and making the most of the limited food supplies with creative cooking. Suzu is our naive everywoman, forced into an arranged marriage and prevented by class and circumstance from answering her true calling as an artist. The film’s most transcendent sequences see Suzu’s artistic vision invade the frame – shots of anti-aircraft re in a bombing raid transform into starbursts of colour, as she muses, in the midst of the direst peril, “I wish I had some paint…”

There’s a tragic undercurrent here, as Suzu finds herself stranded in a milieu and a role for which she is ill-fitted: her cooking is an acquired taste, her housework isn’t quite up to snuff and her snobby sister-in-law is never far from offering a withering critique. In a strange move, Katabuchi and his co-screenwriter Chie Uratani – another Ghibli alum – double down on Suzu’s ditzy, absent-minded flaws, crafting her into something of an animated punching bag, her head constantly cocked in befuddled humiliation as she fails to satisfy yet another quirk of social etiquette. As the war draws on, and real tragedy and personal injury join the clumsy gaffes, you start to wonder: how much punishment should be dealt out to a protagonist in the service of drama? A great deal, it seems.

In This Corner of the World recently beat box office smash Your Name and fan favourite A Silent Voice to take home 2017’s Japanese Academy Award for Animation of the Year. This more sentimental take on the war is certainly at odds with the nightmarish visions found in Grave of the Fireflies and 1983’s Barefoot Gen, the twin peaks of this small corner of the anime world. We’ll see if its reputation endures.

Recent winner of the Japanese Academy Award for Animation of the Year.

Undeniably gorgeous, with a few elegant animated flourishes, but rather toothless in the telling.

A minor entry in the small canon of animated dramas set during the closing days of the War.