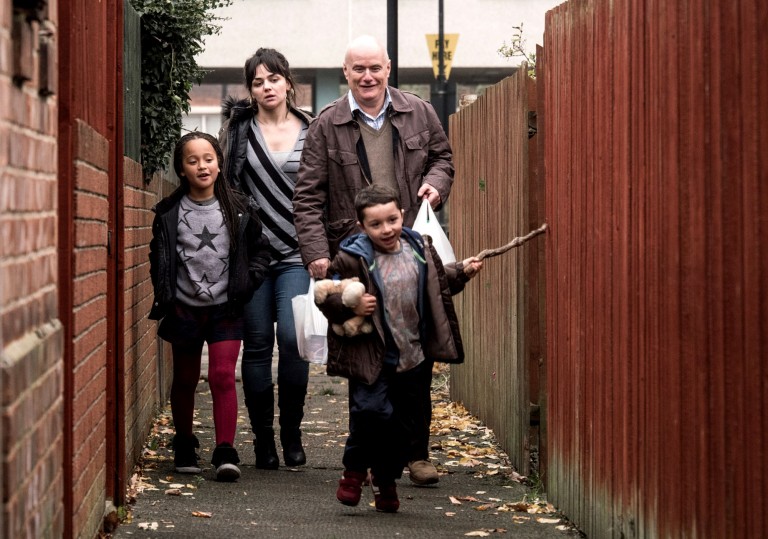 Cinema as a blunt instrument.

A realist melodrama that offers little to no nuance.

If this film didn’t have a title card stating the name of its director, you’d still have no trouble identifying him before any images actually appear on screen. During the opening credits, archetypal salt-of-the-earth working class hero Daniel Blake (Dave Johns) is stultified by the questions he’s being asked in order to complete a health benefits form, a necessary procedure to secure income after a recent heart attack has rendered him unable to work.

His jocular, unhelpful answers emphasise not so much the idiocy of the questions, but how coldly demeaning they are – can you raise your hands above your head, can you press the buttons on a phone, etc. From then on it’s a tale of Daniel vs Goliath as he battles with the twin bureaucracies of a private health firm based in the US and operated largely through faceless call centres, and the Job Centre, whose own staff are depicted as being one remove away from death camp foot soldiers. Yes, we’re on a dinner date of pease pudding and Mighty White with the people’s very own champ, Ken Loach.

In this realist melodrama, Loach and screenwriter Paul Laverty take great pains to paint Daniel as a hobbled martyr, lovable in each and every way, a bloke you’d want to slap on the back and sink a few pints with. Where his blood may boil when deskbound automatons aggressively ask if he understands the what they’re asking him (probably to be able to tick some damn box or other), he’s a paragon of quiet compassion when it comes to helping others. Namely Katie Morgan (Hayley Squires), who is another victim of those heartless government jobsworths having been forcibly relocated from London to Newcastle, away from her mother and the school of her two cherubic children.

There is little to no nuance in this film, or enough that convinces it should be a film rather than a long-read rant in the Socialist Worker, or a bullhorn protest in front of parliament. If anything, it would appear to be doing more harm than good, employing hastily drawn cartoons as its antagonists and using cheap sentiment as political capital. The Mephistophelean evil of The System is ramped up at every opportunity, and Loach crudely co-opts Blake’s dodgy heart as the film’s ticking time bomb. There are instances when Blake’s downfall is the result of his own stubbornness, yet it’s always permissible and often used as a cudgel to attack his oppressors’ basic lack of humanism.

Blunderbuss though it all may be, a major plus point is the naturalistic, not overly feisty performance by young actress Hayley Squires who subtly channels genuine disillusionment in her attempts to shield her children from the dark future they potentially, probably have ahead of them. Still in her early twenties, she brilliantly paints a character who appears to have already consumed and suppressed many lifetimes worth of agonising experience, but is only just coming to terms with much of its long term consequence. There’s one tear-jerking moment which, in lesser hands, could’ve nudged this to the garish levels of misery porn parody, but her commitment and poise save it.

But as usual for Loach, this is cinema as a blunt instrument, used to hit hard and without much grace or sense of direction. It’s a largely artless work which takes no risks with its visual language and never thinks to show when it can tell. A subplot involving a young neighbour selling counterfeit trainers is entirely forgotten about, while Loach never once seems to believe that less might just be more.

It’s also a polemic which is uninterested in solutions, in suggesting ways in which these problems could be alleviated. It believes that arguments are won by focusing on negatives rather than outclassing your opponent with a convincing, progressive alternative. It’s a film which talks exclusively to the people who are already on side with everything it has to say.

Cinema as a blunt instrument.

A realist melodrama that offers little to no nuance.