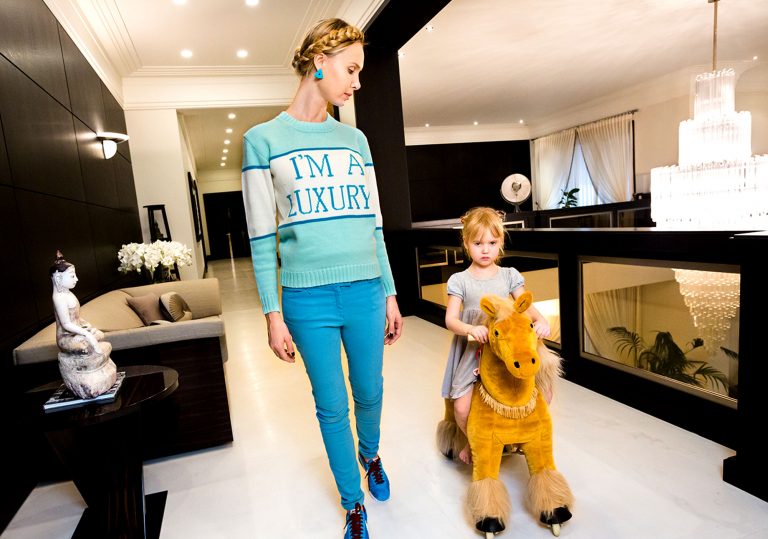 Lauren Greenfield has a knack for fascinating subject matter.

Peppy and engaging, with a slick, Hollywood zeal.

Afraid to cut deep and a little too conservative.

When Gordon Gecko declared “Greed is good” in 1987, a whole generation nodded along in reverential agreement. At the time, Oliver Stone’s Wall Street was seen by the upper echelons less as a blistering indictment of unregulated capitalism, and more a style guide for the financial district elite. Though the halcyon days of the late ’80s and early ’90s have long-since passed, they hold a peculiar kind of fascination for documentarian Lauren Greenfield, who began her career over 25 years ago, recording the lifestyles of the rich and famous. Generation Wealth – her first film since 2012’s The Queen of Versailles – is the culmination of a lifelong obsession with the obsessed.

As such, it makes sense that Greenfield chooses to turn the camera on herself and her family, interviewing her parents, husband and children about how her single-mindedness as an artist has impacted on their lives. At the same time, she reunites with previous subjects and old friends, including baby beauty queen Eden Wood, star of the hit reality show Toddlers & Tiaras, and FBI Most Wanted fraudster Florian Homm. Due to her personal rapport with her subjects, there’s an easy candour to the interviews, the antithesis of Louis Theroux’s awkward blustering. There’s a sense that her charming subjects are chosen for their quotability: “Does Harvard Business School teach you to be a good person?” she asks Florian. He laughs before replying, “No, we’re fine-tuned to rule the world.”

There’s a glossiness about Generation Wealth that makes it captivating to watch, reminiscent of Adam McKay’s slick feature The Big Short for its snappy approach to explaining complex financial terms. But instead of focusing on the money, Greenfield is concerned with who has it and who doesn’t. She speaks to rappers, celebrity offspring, a former porn star and an ex-girlfriend of Donald Trump turned Las Vegas party planner, examining the reality of what money can (and can’t) buy. There’s a slight triteness to all this, particularly the suggestion that the best things in life really are free, which is a belief that only ever seems to be held by those with money in the first place.

Looking past the twee examination of money’s moral value, Greenfield provides a fascinating – albeit brief – look at the commodification of the American Dream, and its dissemination around the world. She visits a chipper Icelander, who went from fisherman to banker to fisherman, following the trajectory of his country’s 2008-2011 financial crisis. Meanwhile, former Communist countries such as Russia and China, have rapidly embraced Capitalism and become leading consumers of Western luxury goods. In a film packed with fascinating lines of enquiry, these two moments in particular feels worthy of further examination, but despite its ambition, there’s simply not enough time to cover it all.

This doesn’t come as much of a surprise, given that this film feels so personal to Greenfield – it’s less about wealth as a abstract concept and more her personal connection to it. Much like her photography work, Generation Wealth has all the surface appeal and charisma of a luxe coffee table book, but this documentary lacks the killer instinct to tell us, the Great Unwashed Masses, anything we don’t already know about excess.

Lauren Greenfield has a knack for fascinating subject matter.

Peppy and engaging, with a slick, Hollywood zeal.

Afraid to cut deep and a little too conservative.