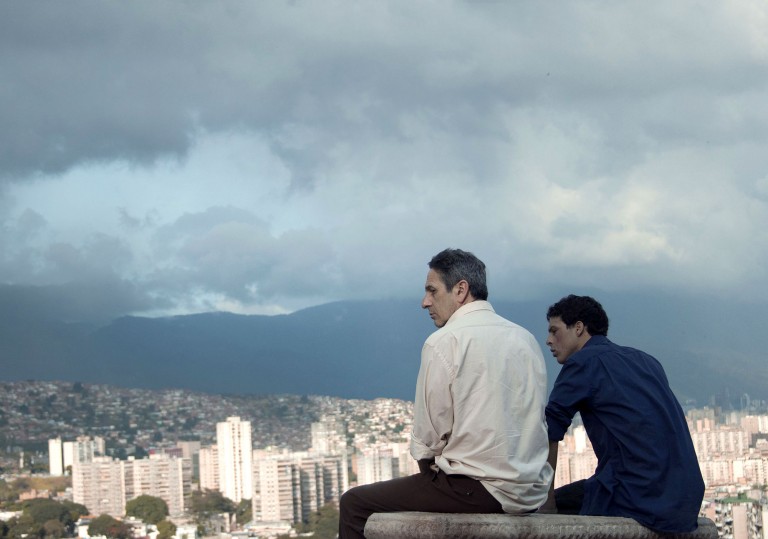 The film that beat Anomalisa at the Venice Film Festival.

Shows promise, but hardly worthy of this giant spotlight.

All signs point to director Vigas going on to make something much better.

This Golden Lion winner from Venezuela offers intrigue a-plenty, but the pay off is regrettably modest.

Venezuela got its name on the international film festival success map in 2015 when Lorenzo Vigas’ From Afar scooped the top price at Venice. Maybe this was a great way to acknowledge a national film scene in the ascent, but at the same time it places a lot of expectation on a work which, all told, is small in scale and modest in intent. It’s solidly put together, and earns a little extra kudos for the fact that it’s a debut feature, but the apparent precision of its construction isn’t enough to mask that it really doesn’t hold up to close scrutiny.

Alfredo Castro, the Chilean actor known for playing intense weirdos in Pablo Larrain movies, plays an intense weirdo named Armando who, in the opening scene, is observed following a young man on to a bus and flashing a wad of cash at him. Cut to his dimly-lit apartment where Armando is slumped in his favourite comfy chair as the now semi-nude youth stands a few meters in front of him. He’s politely asked to strip while Armando dutifully gets his rocks off. No physical contact is made.

By day Alfredo makes dentures, while all of his free time appears to be dedicated to preying on largely working class men. He tries his luck with gang member Elder (Luis Silva), who at the moment of truth decides to turn the tables, whack Alfredo over the head and scarper with his wallet. Bizarrely, Alfredo feels no resentment towards the young tyro. If anything, his mind is fixed on getting closer to him, entering into his world, going all-out to earn his love.

Vigas obscures the motivations of the two leads for much of the film. About half-way through, it’s clear that he’s leading towards a big reveal. Yet, when the film ends, the feeling is that Vigas has supplied an answer to a question which he didn’t ask. While the relationship between the men feels credible on a strictly performance-based level, the reasons why these people choose to do what they do seldom has a basis in understandable reality. Characters alter their temperament and depart from their social sets on a churlish whim.

On the plus side, Vigas is obviously a director who has taken great pains over each shot, making sure the framing is as he wants it and the performances are delicately calibrated towards realising his grand, over-arching vision. But some of the choices he makes only serve to obfuscate rather than clarify matters. It’s an impressive, albeit deeply flawed film that is too busy playing sleight of hand games to express anything of real value.

The film that beat Anomalisa at the Venice Film Festival.

Shows promise, but hardly worthy of this giant spotlight.

All signs point to director Vigas going on to make something much better.